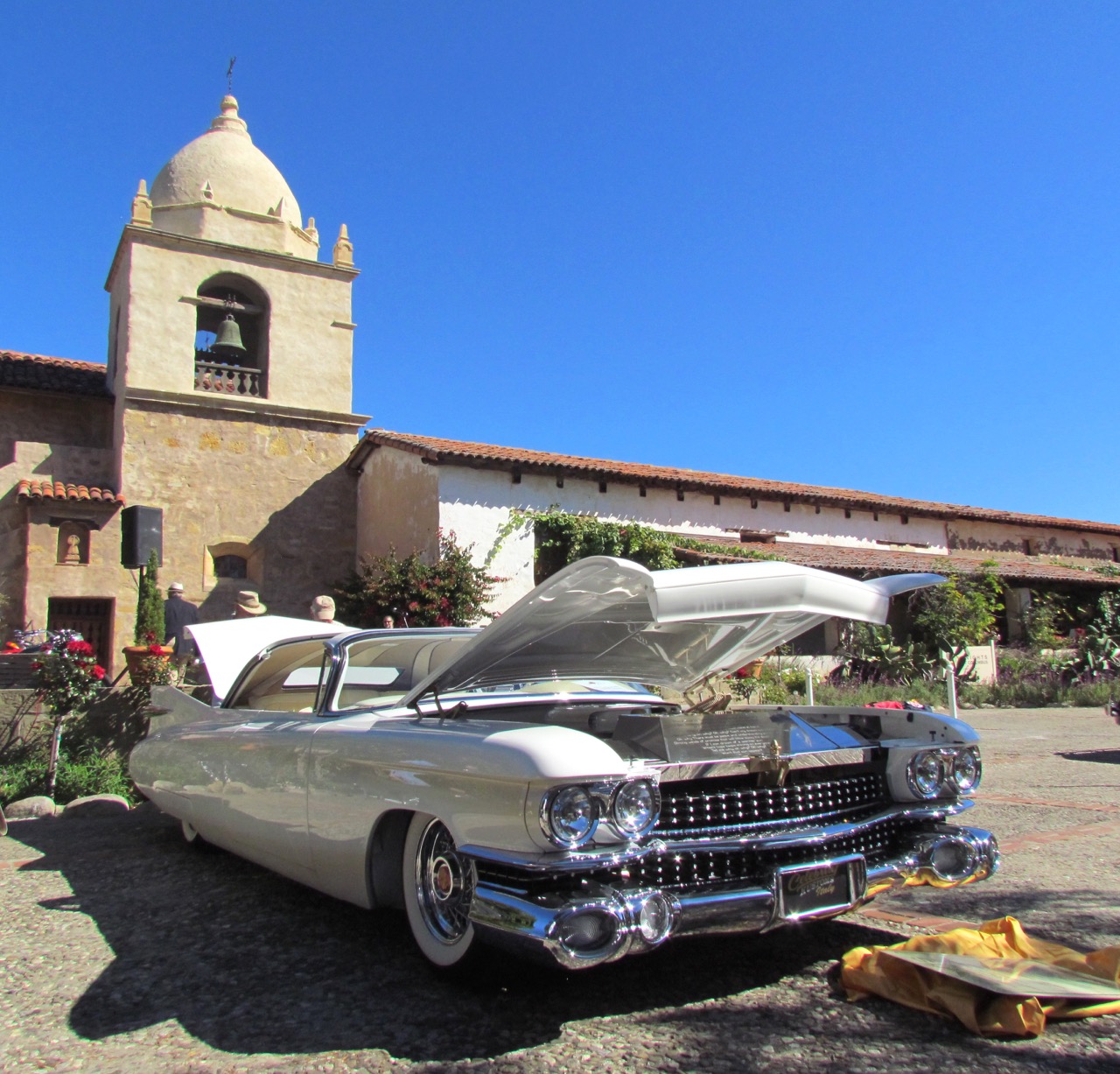 Wow, things are expensive in Monterey, from the cost for food — whether purchased at a grocery or in a restaurant — to the bumped-up — no, make that supercharged — prices for lodging, and even the admission prices charged for some of the car shows.

On the other hand, a gallon of gasoline cost less than we expected. Sure, $3.49 a gallon might be a lot more than people are paying elsewhere in the country, but it was a buck cheaper than we were charged when we refilled at various crossroads out in the Mohave Desert on our way to and from Monterey Classic Car Week.

Speaking of those desert outposts, we took scenic routes going and coming between Phoenix and Monterey. On the way there, we discovered the amazing depth and beauty of Kern Canyon as California Route 178 snakes between Bakersfield and Lake Isabella (which, sadly, has pretty much dried up as California suffers a prolonged drought).

On the way home, we found ourselves at Blackwells Corner in Lost Hills, which is where, 60 years ago next month, James Dean stopped to buy his last pack of cigarettes. Later, and famished, we stumbled into Boron with its historic Twenty Mule Team Road, and we were very glad to discover Domingo’s Place restaurant. Still later, we enjoyed the way the setting sun illuminated the stark mountains between Twenty Nine Palms and the Colorado River.

‘We touch with our eyes,” said Mom. So Grandpa lifts those eyes for a better view at Classic Americana

While the admission cost at some Monterey events is steep, there also are wonderful car shows you can attend for no charge. I enjoyed the Carmel-by-the-Sea Concours on the Avenue, the inaugural Classic Americana show out in Carmel Valley (small this year, but I’m guessing it will triple in scope next year), the Pacific Grove Concours Auto Rally (well, at least the concours; I couldn’t stay for the rally) and the Concours d’ LeMons in Seaside.

And there were others that Bob Golfen and/or Andy Reid attended (one person cannot get to every event during the week on the peninsula): The Little Car Show in Pacific Grove, the Pebble Beach Tour d’Elegance (your opportunity to see the concours cars not parked on a golf course fairway but out on the open road), Legends of the Autobahn and the Porsche Werks Reunion (although the Porsche event charged $10 for parking).

Another event I really enjoyed charged what turned out to be a rather minimal admission price: The Carmel Mission Classic is held within the ancient walls of a historic Spanish-era mission, which provides an amazing backdrop to the cars on display. The admission fee is $45, but that includes a wine glass which you can fill (and refill) inside, where half a dozen wineries shared the fruits of their vineyards.

I also took part in Dawn Patrol in the early morning when the cars rolled onto the 18th fairway of the golf links hours before the annual Pebble Beach Concours d’Elegance. I’m assuming there was no admission fee (other than the $10 charge to drive on 17 Mile Drive) because, in the pre-dawn darkness, I encountered no one who was checking to see if people had any sort of ticket or media or other admission credentials.

Oh, and one note if you do get up early enough for Dawn Patrol: While most everyone gathers along the roped-off lane up near the 18th green, probably half of the cars actually arrive via a driveway way back near the tee box.

My favorite at Pebble Beach: 1938 Graham Model 97 by Saoutchik

Speaking of the concours, my absolute favorite car on the fairway was the stunning 1938 Graham Model 97 Saoutchik convertible, which much to my surprise and disappointment (and I wasn’t the only spectator expressing such emotions) didn’t even win best in the American Classic Open class and therefore wasn’t eligible for best of show honors.

The car was one of two Grahams bodied by the amazing Russian-born (as Iaktov) Paris-based (as Jacques) coachbuilder. The car made its debut at the 1938 Prix d’Avant-Garde at the Foire de Lyon in France, and then was used (with its owner, Maurice Reb, serving as driver) to carry French Gen. Alphonse Pierre Juin through World War II in Algiers. Later, the car was sold and brought to the United States, where at one point it was part of William Harrah’s huge collection.

It was purchased in 1981 by Edmund Kowalski, who intended to restore the car and to show at Pebble Beach. But Kowalski died before completing the restoration, which was finished under the car’s current custodian, Edgar Masters, who showed the Saoutchik Graham in public for the first time since its debut in France.

While I was disappointed my favorite car didn’t win, I was heartened that the judges did include among their final four candidates for best of show a seemingly small and easily unnoticed car near the middle of a fairway filled with so many larger and awe-inspiring vehicles. It was the little 1953 Abarth 1100 Sport Ghia coupe. Like the Saoutchik Graham, the Abarth’s story is as amazing as is the car’s appearance.

The car was displayed at the 1953 Turin Salon by Ghia, where it shared the stand with another Ghia creation, the much-acclaimed Dodge Firearrow concept. The Abarth coupe’s design is credited to Giovanni Michelotti, albeit with styling influence from the likes of both Virgil Exner, head of design at Chrysler, and Giovanni Savonuzzi, whose work included the Cisitalia 202 and various Supersonics.

After its debut, the car was sold to William Vaughn, apparently a Fiat dealer in New York. He displayed the car at the 1954 New York auto show but as the Vaughn SS Wildcat. Vaughn reportedly planned to put the car into production with an American V8 under the hood instead of the Fiat four. Fiat eventually sued Vaughn over the continued use of the automaker’s name as part of his business and at some point, the ’53 Abarth disappeared.

The car eventually was discovered by Pete Sherman, who died in the crash of his P-38 Lightning fighter plane. The Abarth coupe was sold at Sherman’s estate sale and had several other owners until being purchased and restored over the course of five years by Grant Kinzel of Calgary, Canada, and some of his car-expert friends.

The car’s appearance at Pebble Beach was its first since the ’54 New York show.

PS: A personal “thank you” to Richard Attwell of Coastal Transport and Richard and Nancy Sevenoaks of Leake Auctions for inviting me to their annual luncheon for the transport truck drivers and others who get cars ready for the fairway at Pebble Beach and also for sharing the refuge of their hospitality suite during the concours itself.

Question of the Day: Do you like the Corvette Indy Concept?