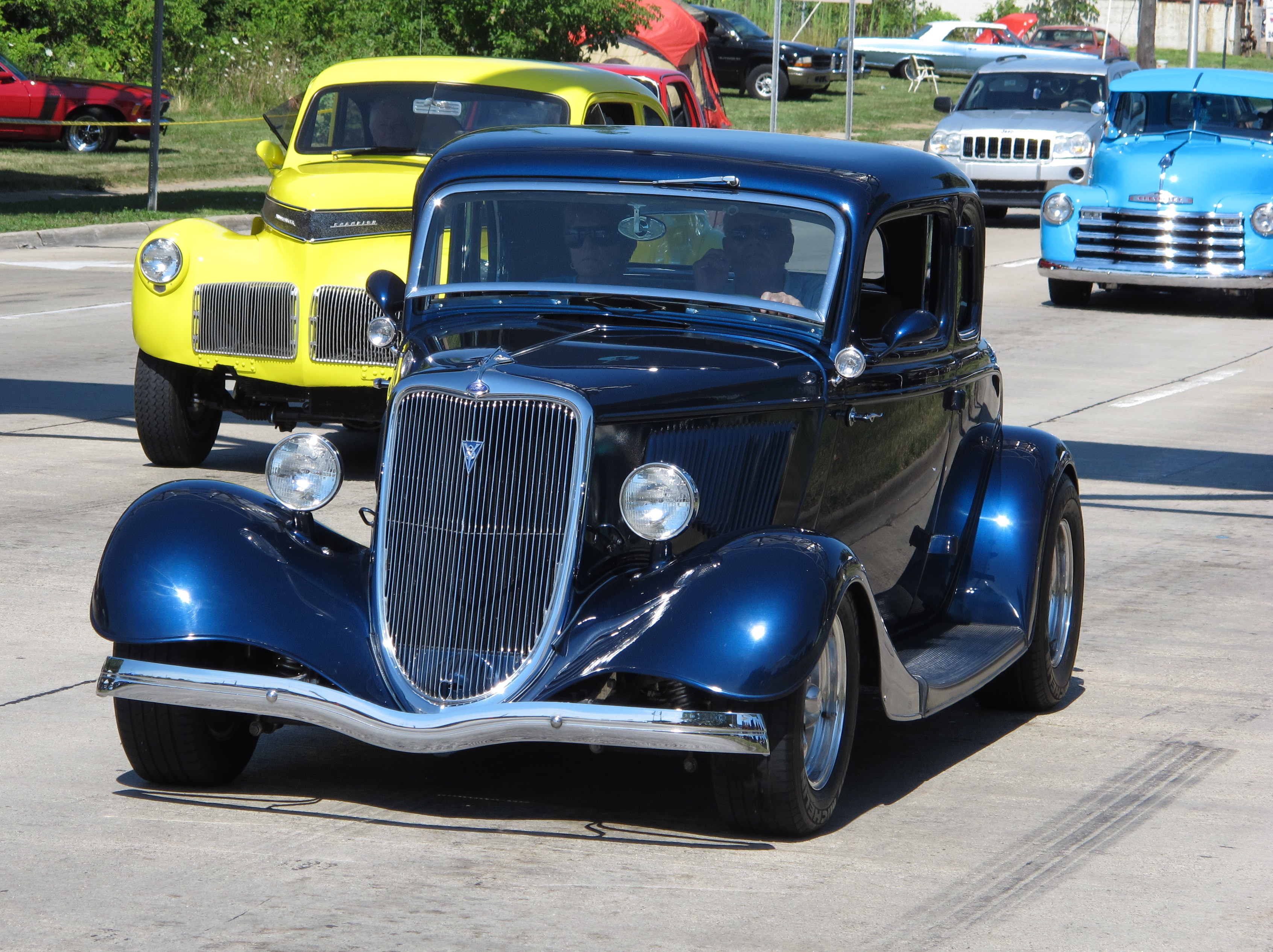 Ford, Studebaker and Chevy cruisers on Woodward Avenue during the Dream Cruise | Kevin A. Wilson photos

The 2015 Woodward Dream Cruise drew more than a million people and somewhere between 30,000 and 60,000 “classic” cars to suburban Detroit on a sunny Saturday celebration of the car.

On a map, Woodward Avenue looks like a 27-mile long needle pointing into the heart of the Detroit. The southern end points into the Detroit River, far south of 8 Mile Road, the city’s northern boundary. That stretch is not officially involved in the Dream Cruise, though many visitors do venture into the city where so much automotive history was written.

The far northern end forms the eye of the needle, known as The Loop, where the road circles downtown Pontiac, a town named for an Ottawa war chief. Inside The Loop is where we took most of these Eye Candy photos during what is nominally a one-day event. In reality, Dream Cruise-related car activities stretch out over more than a week; we also grabbed a few photos on Friday night near 12 Mile Road in Berkley, where a lot of clubs and auto manufacturer marketing events congregate.

In stark contrast to the automotive festivities in Monterey the same week every year, where auctioneers tout multi-million dollar sales and admission fees to various events cost $300 and up, the Dream Cruise is a free for all. Drive whatever you’ve got on a public thoroughfare that remains open to all traffic, sit beside the road and watch the car show come to you, do both or create your own plan. Ain’t nothing but an open-air party. There are no economic barriers, no fees, no invitations required. Like cars? Give it a wash and come cruise, watch, enter a car show or just enjoy the sunny summer day.

There’s no better place to see that open-to-all aspect than in the city of Pontiac. Of participating towns, it’s the one that seems most in need of the annual economic boost the Dream Cruise brings. It is best known to car folks as the birthplace of Pontiac cars. Before it was a division of General Motors, Pontiac was a brand of cars built by Oakland Motors, named for the surrounding county. Pontiac was also where GMC trucks got started. As a company town, the city was suffering from the progressive shrinkage of General Motors long before the 2009 bankruptcy but took another blow when the Pontiac division itself was shut down.

Today, it was aptly described in news media reports as a pocket of poverty in a sea of wealth — Oakland County is one of America’s richest (before the automotive bankruptcies, it ranked as the single wealthiest). These facts diminish automotive enthusiasm not at all.

If the cars people bring out are neither as rare nor valuable as those celebrated in California, the pride of ownership is at least as strong.

As you’d expect, domestic cars dominate and owners are hands-on, grimy fingernails folks, many of whom have maintained, rebuilt or restored their rides. Another large contingent can tell you they worked in the factories or in other roles for the automakers, explaining the attachment to the likes of a Fiero the owner helped to build in Pontiac or a Buick from the factory where grand-dad worked in Flint.

The Loop (known as Wide Track Drive until 1996, in tribute to the Pontiac automotive slogan) was built in the late 1950s when the city decided to divert Woodward around the downtown rather than into its center. A decision as questionable as any General Motors made in the same era, it does make convenient way for northbound cruisers to simply follow the road around the town and head south.

A local newspaper sponsors a large car show downtown that brings many into the city center to enjoy concessions, bands and restaurants. It’s only a few steps from the roadside, where you can watch the cruisers drive by, to the parking lots and city streets where you get a closer view of the cars, chat with their owners and hear those stories.