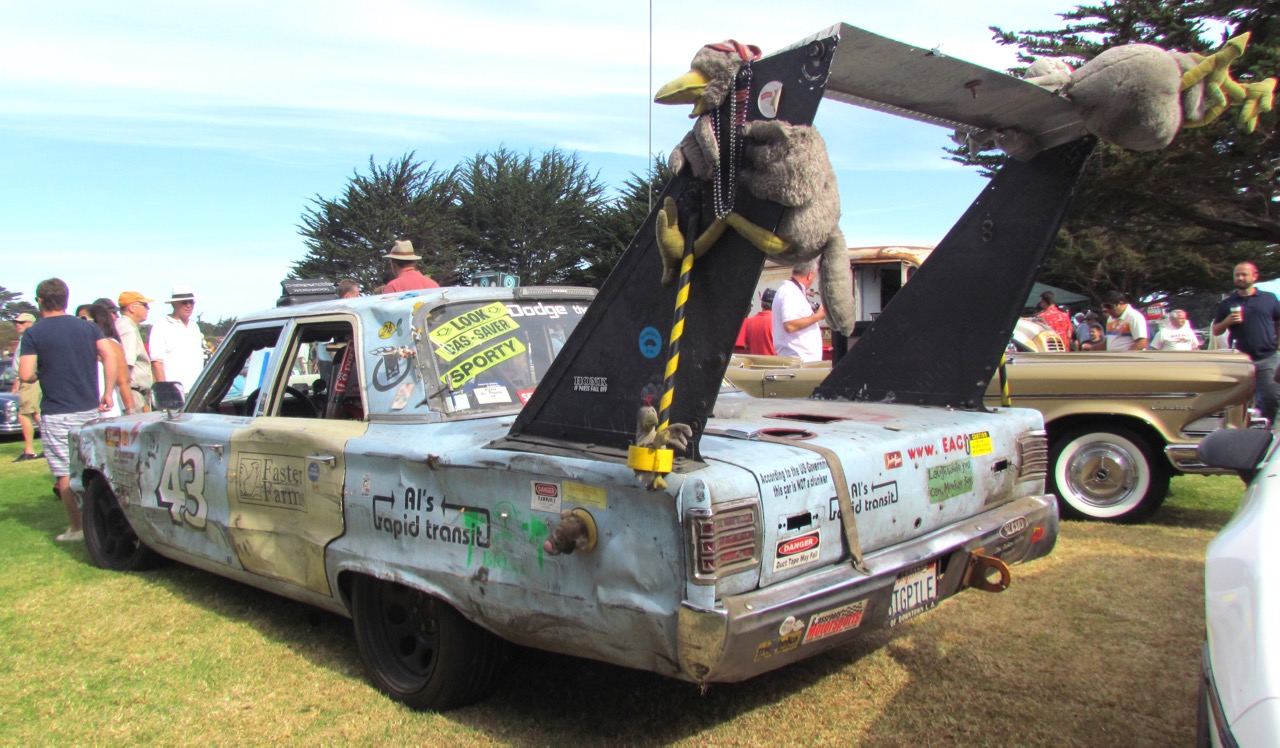 This is both an Eye Candy gallery (see below) and a Commentary on the Concours d’LeMons California, held Saturday in a portion of Laguna Grande Regional Park just southeast of the Chili’s restaurant in Seaside, a military town turned working-class community on the fringe of California’s Monterey Peninsula.

On the fringe not only describes what I’ve seen of Seaside through the years but also the Concours d’LeMons itself.

Brainchild of Jay Lamm, son of well-known automotive journalist and historian Michael Lamm, LeMons is both a play on the term for horrible automobiles and on the famed 24-hour race in France. Lamm’s LeMons started as a race for the most inexpensive of cars — spending limit is $500 — and has grown into an actual racing series, with entry fees higher than the value of the cars competing.

And thanks to Alan Galbraith, there also was a Concours d’LeMons a few years ago, and now there are a series of such events, complete with sponsorship from Hagerty and Grassroots Motorsports magazine.

The concours, the organizers say, “is a celebration of the Oddball, Mundane and truly Awful of the automotive world.” In other words, the antithesis of everything else that takes place during the annual Monterey Classic Car Week.

But just as Galbraith has graduated from wearing colorful Bermuda shorts beneath his blue blazers to wearing long, grown-up if pastel-colored pants, the Concours d’LeMons itself seems to be maturing.

The question is: Has it outgrown its purpose? Or maybe it’s just that what started as a joke now is being taken too seriously.

I write that because many of the cars on display Saturday at Laguna Grande were far from lemons. They were shining, gorgeous and rare automotive gems, cars that should be contenders for best-of show-trophies, not the worst-of-show award that goes to the worst of the LeMons.

Two phrases I heard as I walked through the show field:

Trust me, no car eligible for the Concours d’LeMons should ever be worth any figure even approaching $40,000.

But $40,000, take it to your local cruise-in or maybe one of Mitch Silver’s auctions. Or maybe Monterey Classic Car Week needs yet another event on its already overcrowded calendar, one for the strange and unusual cars that have been preserved and maintained, and maybe still serve as daily drivers, but that also should be and need to be seen and appreciated at an event like LeMons.