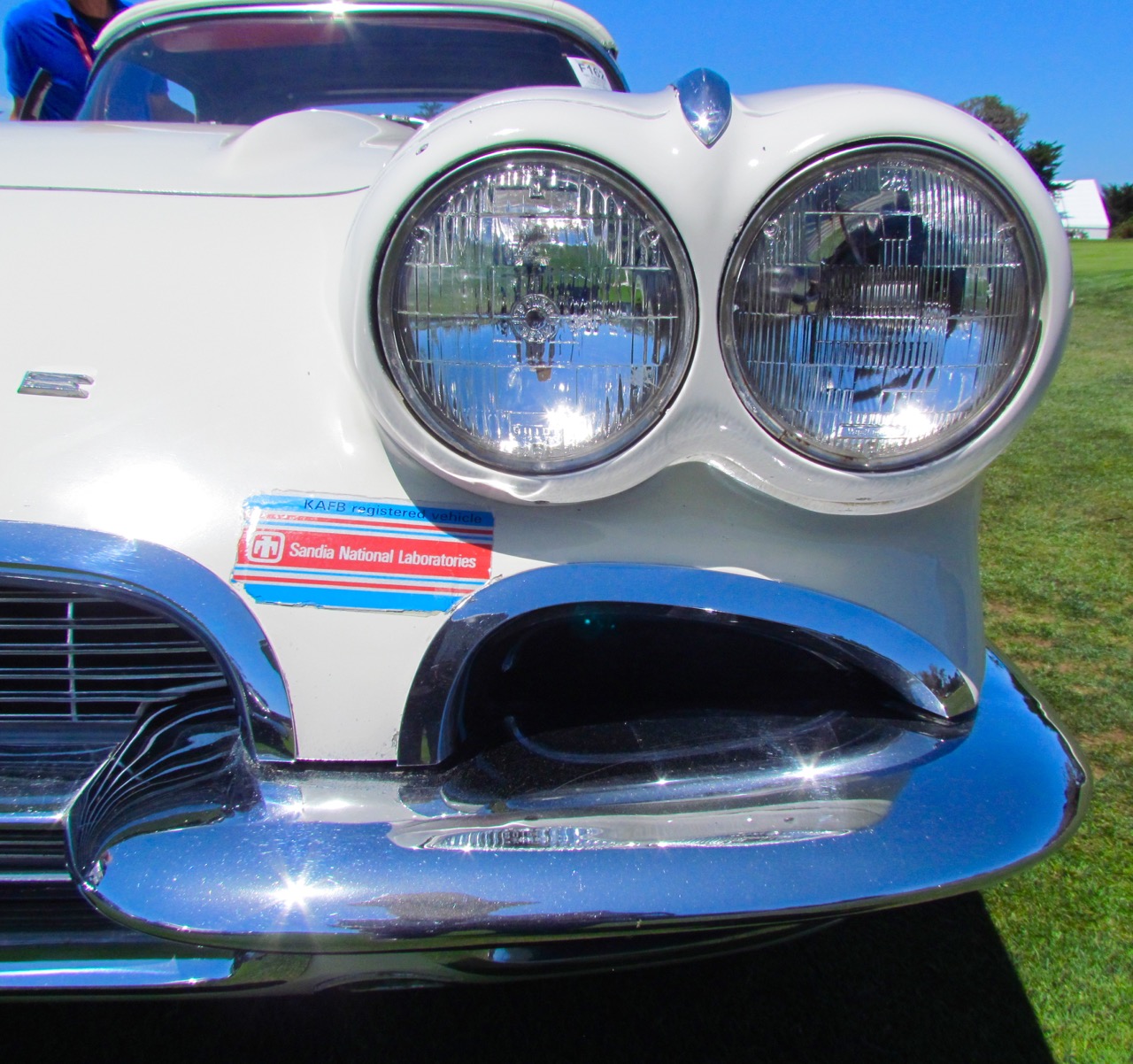 Back in March, I received an email from Eve Nichol, who moved to Monterey, California, several years ago to take care of her ailing parents. She told me she liked my writing and knew I’d written a book on the Chevrolet Corvette. She said she finally was considering the sale of her late father’s beloved 1961 Corvette and wondered if I might offer her some advice about dealing with auction companies.

We emailed back and forth a couple of times and I said I’d try to find her and to see her car when I was in Monterey this summer for Classic Car Week.

Tuesday afternoon, I met Eve and her partner, James Hood, at the Hyatt Monterey where Mecum will stages its “Daytime Auction” this week and where Lot F162 is the Corvette that Eve’s father bought new, a car that still wears its original paint, that has an interior that shows remarkably little wear for having been used as his daily driver for many years, and that still bears (just below its driver-side headlamps), the Sandia National Laboratory security sticker.

That sticker is affixed to the painted surface of the car and Eve said she left it rather than risk damaging the finish.

Eve’s father, Eugene “Gene” Reed, was a native of Vienna, Austria, earned a PhD, and worked as an electrical engineer for AT&T, Bell Laboratories, Western Electric and later retired in 1984 as vice president of Sandia Labs. He was known for his pioneering work on microelectronics and integrated circuits.

Eve’s parents loved to vacation in Monterey and eventually bought a house and retired there. Her father died in 2008, her mother in 2009.

Her father bought the Corvette new on February 14, 1961, from Wigder Chevrolet in Livingston, New Jersey, she said, and he was devoted to its care. A six-inch thick binder with seemingly every service receipt accompanies the car. Eve’s dad replaced the convertible at one point, and the car got a valve job at 80,000 miles. The tires also were replaced.

Everything else, including the 283-cid V8, is original.

“He never let me drive it,” she said of growing up with the car and adding that the car never was in so much as a fender-bender.

How devoted to the car and its care was her father?

“For every photo of me in the family archives, there were maybe 200 of the car.”

Eve and James take the car for a drive once a week “to keep it happy,” she said.

But it’s time to sell.

“I feel the weight of my father’s dedication to this car. ‘I’ll never sell it,’ he said,” she added.

But she’s concerned about the possible toll that Monterey’s ocean-side salt air might have on the car and, she believes, “It’s time to let someone like my Dad take it over.”

Mecum has established a pre-auction value of $75,000 to $95,000 for the original ’61 Corvette convertible. Eve has set a reserve price, although she won’t be on the block with the car. She’d be too emotional, she said, and will depend on James to see the car through the bidding process come Friday.

Question of the Day: What is your opinion of the Dodge Challenger Hellcat?