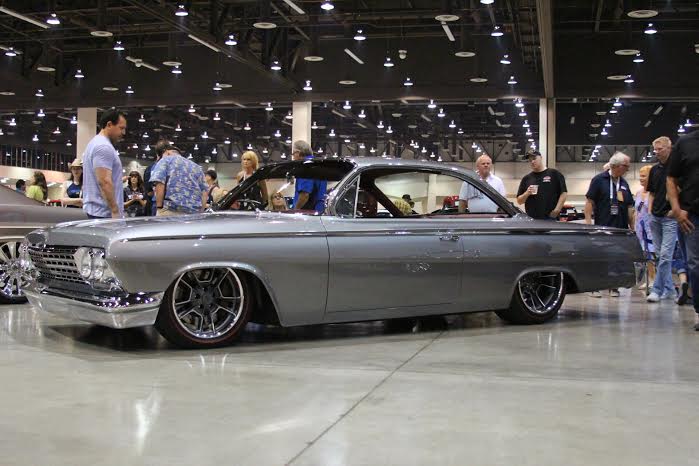 A 1962 Chevolet “bubbletop” owned by Randy and Lisa Wilcox and built by CAL Automotive Creations took the 2015 Barrett Jackson Cup in Reno, Nevada. The Barrett-Jackson Cup has been part of Hot August Nights since 2013 and is awarded in conjunction with the company’s Reno auction.

The recipient of the cup takes home the trophy as well as $30,000 in cash as well as additional prizes such as Craftsman tools, Reliable Transport credit, Barrett-Jackson car care products and more.

Owners Randy and Lisa Wilcox with their children and the judges

The 1962 Chevy bubbletop features an LS9 engine, bowler T56 6-speed transmission, Art Morrision chassis, Billet Specialties one-off wheels, machined side trim, tail lights and window molding. It also has tucked bumpers and a subtle wing has been added to the decklid and quarters. The front fenders have been extended down, headlight bezels and grille has been reshaped to accommodate for this change. The car has Charley Hutton paint, Recovery Room interior and is a Bob Thrash design.

The first runner-up for the Cup was a 1957 Chevrolet pickup owned by Gary Brown and built by Mike Goldman Customs, followed by a 1965 Chevy Impala owned by Don and Elma Voth and built by Chip Foose, a 1956 Plymouth Belvedere owned by Gil and Janet Losi and built by Steve Cook Creations, and a 1965 Dodge Dart owned by Willie Maise and built by Will Posey of Big Oak Garage.

Judges Bobby Alloway, Pete Chapouris and Bob Millard went through more than 60 cars that had been entered and narrowed the field to 25 finalists, which went through another round of judging to determine the top 5.