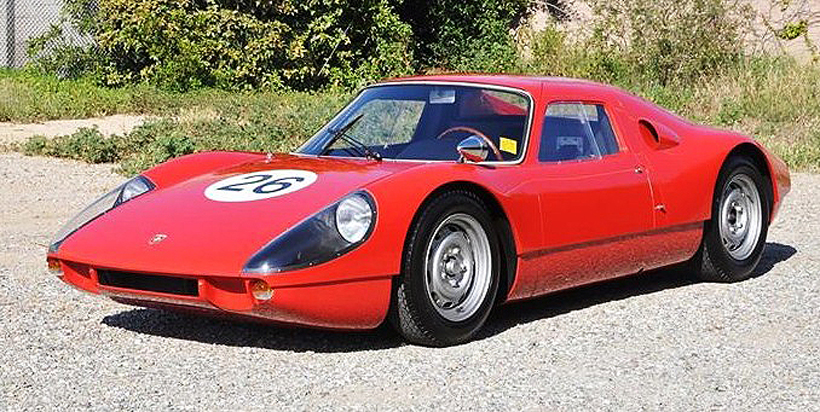 With Monterey Classic Car Week coming right up with its gang of pricey collector-car auctions, we thought the time was right to present our own ultra-exotic automobile from the listings on ClassicCars.com.

The Pick of the Day is one of those seven-figure historic race cars that make your eyes glaze and your mind ponder where you went wrong in life. It’s just the sort of prestigious four-wheeled prize that very deep-pocketed collectors will be bidding on next week in and around Monterey in their rarefied pursuit of history’s greatest cars, and the bragging rights connected with them.

The 904s were fitted with Porsche’s first fiberglass bodies

The 1964 Porsche 904 GTS coupe offered by a well-known Porsche dealer and restorer in Costa Mesa, California, is all that, an example of the wonderfully innovative competition machines devised by Porsche in its pursuit of getting the most out of the least.

Just a few more than 100 of the 904 GTS models for the track or highway (required to comply with FIA’s Group 3 homologation requirements) were built from 1963 through 1965, adding rarity to its inherent desirability. This one has known ownership history and extensive racing provenance going back to 1964, according to the seller, and is in excellent restored condition.

The complex 2.0-liter four-cam engine has been rebuilt, the seller says

“This 904 GTS has an extremely well-known ownership and race history,” the dealer states in the advertisement. “Original delivered by Brumos of Jacksonville, Florida, and last restored by a world-renown Porsche 904 expert, Kevin Ginette, in West Palm Beach, Florida. An extensive, multi-year restoration was undertaken… This 904 is in beautiful condition and has been detailed and ready to race or drive on the street.”

Sounds expensive, doesn’t it? The seller asks that prospective buyers make contact for the price tag, always a scary sign. As the old saying goes, “If you have to ask, you can’t afford it,” yet I’m sure most of you out there are wondering what these things are going for.

According to recent auction results, the 904 has been selling in the range of $1.5 million to $1.8 million, but they can go for even more. Gooding & Company has one at its Pebble Beach auction, a rare 1964 Porsche 904 GTS factory competition car with significant racing history, and the auction company places its value way up there at $2.25 million to $2.75 million.

With the meteoric rise in values for Porsches across the board, who knows what the Pick of the Week will be worth once the bidding is finished at Monterey.

NOTE: The Pick of the Day goes on hiatus next week while we attend all the classic car auctions, shows and concours happening in and around Monterey, and post reports and photos about them on ClassicCars.com. The Pick will resume after we return.