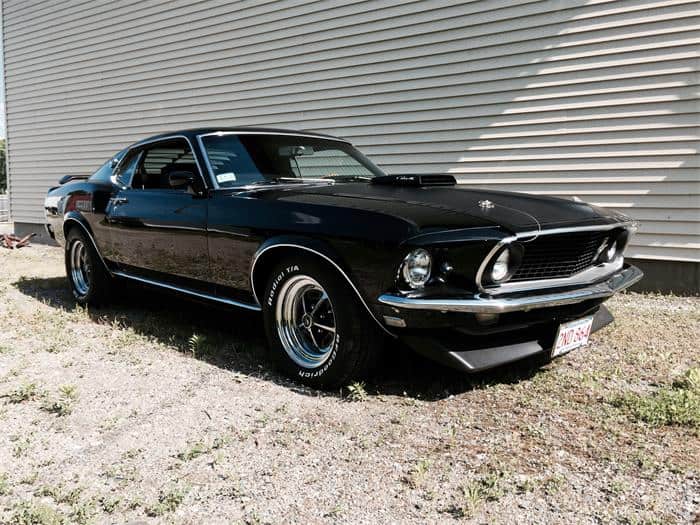 In 1969, only 237 Ford Mustang Mach 1 Cobra Jet R-code cars were made. One of those Cobras Jets is listed on ClassicCars.com by a private seller who says, “It’s really cool that you could go to the dealership back then and buy a car with wings, spoilers, black and chrome all over, hood pins, and shaker hood. It’s just that you can buy it like that back then is really cool.”

This 1969 Ford Mustang Mach 1 Cobra Jet originally came from the Midwest and went to Massachusetts, in the late 1970s, according to the seller, who adds, “Around 1980, the second owner blew the motor up, and he built a brand new motor in 1983. It was a stock rebuild of the original motor.”

“The owner never finished the car. He never even started the rebuilt motor.”

In 1987, the then-owner had the car stripped and painted, and bought all new trim from Ford, the seller says. “The owner never finished the car. He never even started the rebuilt motor.”

A garage was built specifically for the car, where it sat for 20 years until the owner passed away. The current owner bought the car a little over a year ago.

“I’ve assembled the car and restored it,” says the current owner. “The most difficult thing to source was a date-correct carburetor for the car.” The restoration and assembly of the car has been done with details in mind, featuring many NOS parts, the seller said.

The car features matching numbers with the VIN, engine numbers and transmission numbers authenticating this car as an original R-code Cobra Jet Mustang. According to the owner, the car “drives fabulous, runs great, handles nice, and its quiet but got the right vroom-vroom from the exhaust.”

“I have it parked next to my 1970 GTO and this car makes the GTO look like a grandma’s car,” the owner said. “It’s just a really cool factory race car.

“I am a GM guy, I love my grandma-like GTO, but I build a car once a year and you just can’t keep them all.”