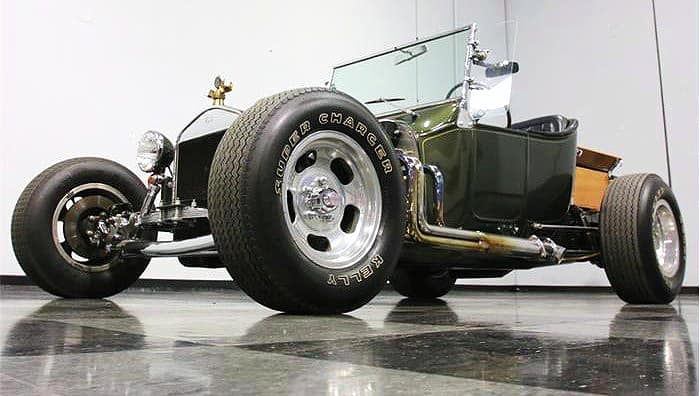 Old Ford Model Ts were all over the place after World War II, just waiting for restless ex-GIs to transform them into outrageous hot rods. From racing at drag strips and salt flats to cruising on Main Street, T-buckets have endured through the decades, and they are still being reinterpreted today.

The Pick of the Day is one of the originals, a 1923 Ford T-bucket pickup roadster created back in the day by famed California hot-rod builder Don Brusseau, founder of the Bay Area Roadsters in the 1960s.

According to the Georgia dealer advertising the roadster on ClassicCars.com, the car is a solid representation of a classic hot rod in good preserved condition “with tons of chrome and just the right amount of patina, from the chrome air cleaner to the T-bucket headers that have just enough blue to look like they work for a living.”

The hot rod was built from a Model T pickup truck

The seller (who unfortunately gets Brusseau’s first and last name spelled wrong) provides some history of the T-bucket.

“Perhaps no rod has ever been duplicated as often as the timeless T-bucket,” the seller wrote. “The first one is unofficially credited to Norm Grabowski, the Kooky Kar, which showed up on (the ’50s TV show) 77 Sunset Strip.”

This T is built from a shortened pickup truck with a hand-made wooden bed in back and a performance-tuned Chevy V8 perched behind its flat radiator. These cars were all about crazy acceleration, with spindly curb weight and big horsepower, and the fat rear tires look ready to grip and go.

“And in typical T-bucket fashion, there are unique details everywhere you look, some totally trick and some totally traditional,” the dealer says. “The dark-green paint is highlighted by subtle gold pinstripes and the raked-back windshield is both iconic and a bit less formal than the usual vertical units. Finish quality is amazing for its age and the details are totally authentic because it was built by a guy who was there when it was all happening.”

While most T-bucket interiors are simple and unembellished, Brusseau opted to fill his cockpit with period accessories, the seller says.

The interior includes a console apparently from a luxury car

“Black leatherette buckets in a traditional button-tufted pattern form the majority of the interior, wrapping around the driver and passenger and creating a very comfortable environment, given the cars upright stance,” the listing says. “A pretty wood steering wheel sits atop the steering column but has a bit more rake to it so it’s easier to drive than most T-buckets, and vintage Stewart-Warner gauges in a custom engine-turned panel keep an eye on the hot small block.

“And this might be the only T-bucket we’ve ever seen with a center console, which looks like it was borrowed from a period luxury car, maybe a Pontiac. You’ll find the entertainment system (the one not tied to your right foot, anyway) involves an AM radio and an under-dash tape player that are all about old-school.”

The asking price is $59,995, which puts it right up there, but the seller notes that this is not just any old T-bucket but a genuine piece of hot-rod history:

“There are plenty of T-buckets out there, but this one is heavily documented and built by one of the cornerstones of the rodding movement. If pedigree matters, this is the T-bucket to own.”