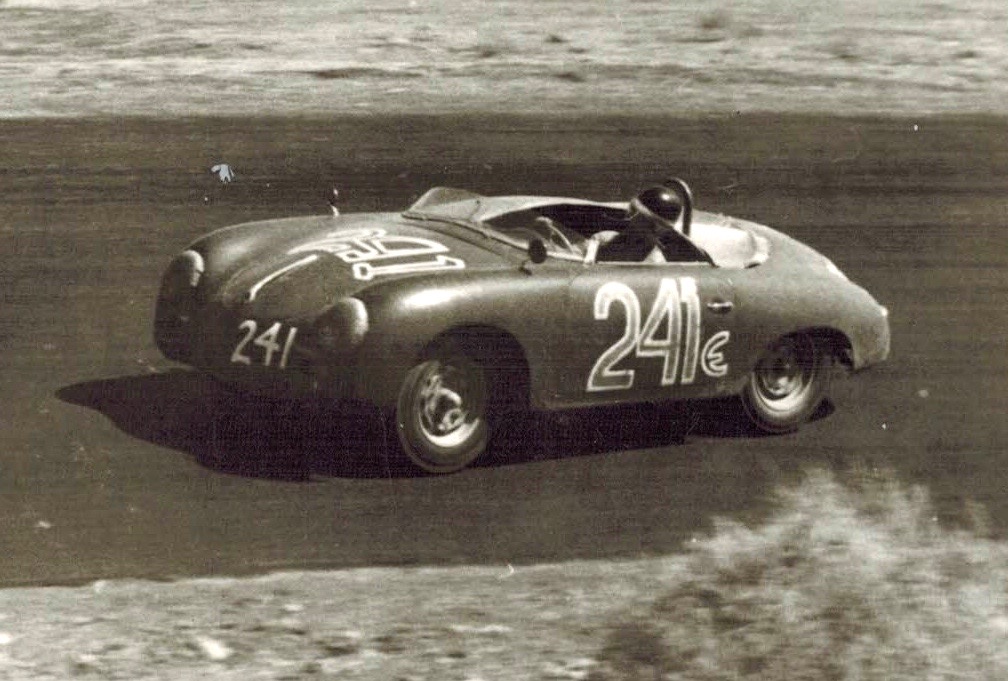 (Editor’s note: This is the second of three stories in which Mike Dyott, owner of the ‘barn-found’ Porsche Speedster for sale on ClassicCars.com, shares his story in his own words.  Read ‘Part One’ by clicking here.)

I drove out to the San Gabriel Valley and found my dream car — a 1957 Porsche 356A 1600S Speedster, parked on the street in a quiet residential area. The second owner was a nice guy. It took no sales pitch at all for me to become the third owner in September of 1960. The Speedster became my family car so it saw its time on the street up until 1965.

It was neat to drive; not only the fun but the pride of ownership. Then something went wrong in the engine. I forget what it was, it wasn’t a big deal but it was inside the engine. I couldn’t afford to have it fixed professionally, although I did have a great mechanic, Ferdi Hanig in North Hollywood. He was Steve McQueen’s race mechanic.

The expense was in that it had to be taken apart to fix it. Being determined and with fairly good mechanical ability, I took it upon myself to learn as I went as to how to take the engine out and how to take it apart. Every time I’d unscrew a nut or take a piece off or out of the engine, I’d draw a picture of how it was before removing it and then would label each nut and bolt as to where it came from and how it came off or should go back on.

My garage was like an operating room with towels laid out and parts arranged on them with pieces from the same assembly together with their illustrations. Once back together, the engine worked great and never missed a beat. Five years later, by the time I’d stopped racing, I’d rebuilt enough Porsche engines, not just my own, that I didn’t need to label things. I could look at a single bolt and know just where it went on the engine and how tightly it should be torqued.

I think that the coup de gras in my love affair with this car was in 1961. My wife and I decided that a road trip was in order and we wanted to go to Oregon. When I’d come to the West Coast for med school, I’d come through Oregon but I couldn’t find work up there so I kept moving south from one med school town to the next and ended up in LA. I’d told my wife how beautiful Oregon and the drive south was so that’s why we chose Oregon.

It’d be the scenic route up to Oregon on Route 99 and then back home on the coast, Route 1. It came 3:30 in the morning. We were both awake.

“I can’t get back to sleep. I’m too excited” she said.

It wasn’t a half hour before we’d got ourselves and our now 3-year-old daughter in the car and on the road north. It was hot and humid but with the top down at 65 mph, it was just right. And it couldn’t have been any better than when we got into the San Joaquin Valley still in the dark of night. A Speedster is so aerodynamic (for its day) that there was essentially no road or wind noise from the car. It was about 80 degrees. The humidity made it seem like our bathtub Porsche was really a bath tub, a comfortable warm one.

As we drove in the quiet with the scents of miles and miles of vegetable fields, grains and fruit trees we were also experiencing the biggest meteorite shower in years. The sky was cloudless the moon a perfect orb with each star a jewel.  Every so many seconds there was a flaming tracer across the sky to the east. It was such a wonderful experience that I even wrote a poem about it. In my eyes in the poem, the Speedster was a big part of it.

The Porsche would impress me in other areas on that trip. For one, it got 30 mpg and for another, the top and side curtains never leaked in the heavy Oregon rains.

It took me another year before my yen for competitive driving could no longer be contained. The trouble was that the Porsche was my family car, my wife was an indoor type of person and wanted me to be a homebody, too. She resented that I played sports and wanted me home with her all the time. Plus, it costs money to race and I felt responsibility not to spend family money to go racing.

The friend with whom I drove around the country as a teenager, moved out to California with his wife. That gave us the excuse to leave the wives at home and to go to spectate at drag races and at sports car races at tracks like Riverside, Pomona and Willow Springs.

And then the deception began, my little secret. I not only started drag racing when I’d go to the drags but started racing the Speedster at Cal Club, SCCA races. At the drags, I could drive there, enter and race in street trim.

To race at Riverside was another story. First of all, I had to have a roll bar, a wind screen and racing togs that’d get me through tech inspection. I could buy the racing suit but couldn’t take family money to buy a ready made roll bar or wind screen. By this time, I’d been working in the aerospace industry as a materials and processes engineer. I bought the materials, did a design, prepped what I could at home and then took them to a shop for forming, welding, heat treating, etc..  Even though I could get through tech inspection, I was still racing the car in essentially street trim.

I started racing at Riverside in my E Production class and then would be free to watch the modifieds with such heros as Stirling Moss, Ken Miles and Roger Penske, et al, put the pedal to the metal around Riverside’s 9 turns.

In my race I was able to be clocked at 110 mph on the back straight under the bridge which was pretty good since the car’s top speed in stock form was supposed to be 109. Little by little, I learned how to take things off the car at the track fast enough that I could drive the freeways to the track, get a pit and then take off the bumpers, the windshield, etc. I’d then get through tech, race my race and then put everything back on the car to drive home. I’d stash the roll bar and wind screen under the tonneau cover.

I even developed a little following because some saw me driving to the race on the freeway. They’d come into the pits and say, “Didn’t we see you on the freeway driving here?” They’d add, “We remember when others drove their race cars on the street to the races but you must be the last one.”

Thinking back, I don’t know how I ever did it. Changing out all those parts and then changing them back must have been a labor of love, as they say. Luckily, my wife being an inside person, she didn’t even go outside to garden, I could have the roll bar, driving suit, helmet, etc. in the garage without her knowing.

The car also saw its time at hill climbs, drag races and SCCA traloms. In drag racing at two different strips, my 356A never lost a race with its stock transmission, which it still has. In hill climbs, I never finished worse than third.

The car really showed its mettle at the Lake Casitas Hill Climb because of the number of entries and merit of some of the drivers in SCCA road racing.  The Lake Casitas event was on a dirt course. There were 142 entries and 426 timed runs. My little Speedster was third overall and won its class. It took two other Porsches in higher classes to beat it. The newspaper article  and results are the only results I still have because I taped them to the back of the silver plaque that goes with the car.

The Speedster’s best tralom was at a race track in Agoura Hills. My mechanic, Ferdi Hanig, had told me that the hot setup for a 356 was to take the stock muffler, cut the end off, take out the guts and then weld the end back on. He said that Steve McQueen had used that. I could afford that so that’s what I had when I went to the tralom a week later. There were 170 entries. They all had times between 14.1 and 22.5 seconds. That is, except for this funny sounding little Speedster. I was able to turn a 13 or 13.1, I forget which, but I was 1 second faster than everyone else.

After my run I parked it out back and went to spectate. Then I decided to go back and get my camera. When I got to the car a throng of people were around it with some laying on the ground under the rear end. They thought that it was the strange muffler that made the car put up such a good time. The muffler came off the car the next week and never went back on.

At that tralom, there was a German guy who was noted as winning all the traloms and slaloms. The SCCA organizers weren’t too happy about me beating him so badly. Two weeks later there was a tralom in Long Beach. Again, I beat everyone, including Von X or whatever his name was, by a second. But I’d rocked a cone just passed the start/finish line. These officials said that rocking the cone disqualified me for both of my timed laps and that Von X had won. I never went back to another SCCA tralom.

From then on it was just SCCA road racing. I theorize that a 1600S Speedster with stock engine and with stock gears is more responsive and quicker off the line than equivalent class cars. This was in evidence at road races. On starts, I’d always pass several cars before the first turn. Unfortunately, when we got to a straightaway, some would pass me back.

I continued to race in secret for over a year. Then, at Del Mar, the clandestine part of my racing career, if I can call it a career, came to an end. Guys would pass me on the straightaways and then I’d pass them back in the turns and esses. As a side light, that’s the race weekend when Steve McQueen’s Lotus 23 burned up outside Turn 1. Anyway, I knew that I was losing oil for some reason I forget but my frustration with passing cars and then losing the spots back on the straight kept me pushing it. A rod let go and there I was, stuck, without a way to get the car home.

My friend who had come to watch got in touch with my wife and I had to fess up.

Read ‘Part Three’, the next and final installment.