At 75, Sturgis Motorcycle Rally is a true classic 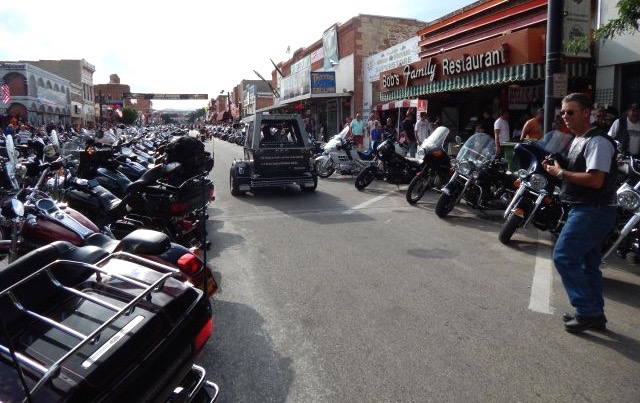 It all started August 14, 1938, in Sturgis, South Dakota. A group of nine motorcyclists from the Jackpine Gypsies Motorcycle Club decided to hold a rally and a race. A few spectators were on hand to watch.

And the rest, as they say, is history — and in the process a legend that became a motorcycling institution was created.

Since its humble beginnings, the Sturgis Motorcycle Rally has been held continuously with the only exception being two years during WW2 when people were worried about something besides a bunch of bikers.

Over the years the Sturgis rally has grown and changed a bit but at its heart it is still an event where a bunch of like-minded motorcyclists get together to ride and show off their bikes, hang out, camp, and drink lots of beer.

These days, the Sturgis Motorcycle Rally is the largest single motorcycle event in the world. In 1970, the estimated attendance was 2,000. These days, attendance is in excess of 400,000 people.

This year marks the 75th anniversary of the Sturgis Motorcycle Rally and this huge week long event has something for anyone who likes motorcycles regardless of favorite brand.

The rally is broken down into three different areas or zones:

The Sturgis Zone is heart of the rally and Main Street is the place to see people and bikes. You should definitely visit Main Street at least one evening of the rally. This is the place for tattoo parlors as well if you want to permanently document the event on your body.

The Bear Butte Zone is east of the city of Sturgis and is where the major concerts are held. The Buffalo Chip and Rockin’ the Rally are the two main event venues for these shows. Past performers include Tom Petty, Keith Urban, Kid Rock and ZZ Top. The Bear Butte zone is also the place where you find the most out of control campgrounds and where you can watch motorcycle and car drag races during the week.

The Black Hills Zone offers many options for scenic rides around the area, including Mount Rushmore, the Badlands and several other historical areas including the Crazy Horse Monument. This is probably the most low-key area and the place to go if you would rather ride your motorcycle than pose by it with a beer.

Well, to answer that we can tell you that there are a total of 12 motorcycle shows during the event. These shows feature everything from the newest motorcycle models to serious customs to some of the oldest and most valuable motorcycles in the world.

The event also holds old-time wall of death shows and many other vintage motorcycle events, including tech sessions and workshops.

Combine that with the hundreds of vendors and impromptu swap meets in every camping area and we would answer that it is indeed a classic bike friendly event.

If you also consider that V-Twin powered motorcycles, whether new or old, are timeless classics in themselves, we think that the Sturgis Rally is a classic motorcycle event like no other and a bucket list item for anyone who loves traveling on to wheels.

This year the Sturgis Motorcycle Rally runs August 3-9 More information is available on the rally’s website.