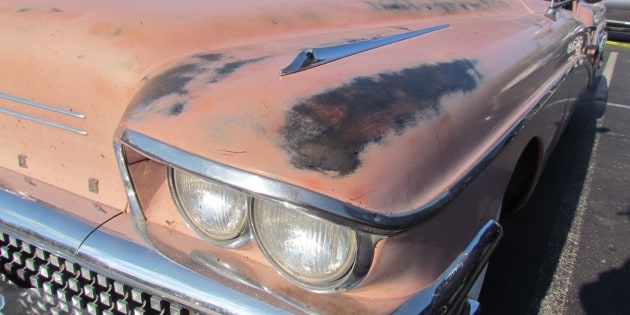 There were dozens, more likely hundreds of local car shows held across the country on the recent Collector Car Appreciation Day. One of them was the Retro Roll In that took place in the northern Michigan town of Gladwin.

Staged by the Gladwin Business & Professional Association, hosted by Riverwalk Place, a hotel/spa/shopping/event center, and sponsored by various local businesses, Retro Roll In includes a car show, a police-escorted Main Street cruise and a drive-in style movie night; this year it was Grease.

But it might have been more fitting had the movie been Shrek, or even Beauty and the Beast.

Shrek the Ogre is the name Mike Heinstand has given to his 1947 Pontiac Torpedo, or at least what is left of that vehicle. Because over the course of 5/1 2 years and more than 2,000 hours of labor, labor done in a home garage, Heinstand and his cousin, Ken Voss, transformed what Heinstand said was perhaps the biggest and ugliest car he’d ever seen into a dazzling showpiece.

But this big green and purple-trimmed car isn’t just a showpiece. Though not quite finished — there’s still some paint that needs to be done to interior parts of the gullwing doors — Heinstand has put 2,000 miles on Shrek since April, and reports averaging nearly 22 miles per gallon doing so.

Heinstand notes at least 30 modifications he and Voss made to the car. The most noticeable are the paint, multiple coats that took a year to get right in Heinstand’s eyes, and the gullwing doors, which took Voss a year and a half to fashion. Voss is an Air Force veteran and designed the doors to be like those on jet fighters.

The grille is handmade and the cutout word PONTIAC across the car’s rear flank lights up red when the brakes are applied.

Less noticeable are the modified 350-cid Chevrolet engine, which came out of a 1987 state police car, or the 8-inch Ford rear end, or the 700 R4 gearbox, or Chevy Nova subframe, or the fact Heinstand and Voss mounted the rack-and-pinon steering gear as far from the front of the car as possible to enhance driveability.

Just like Shrek in the movie, the namesake car is big and green, but it is very friendly. Heinstand eagerly invites children to sit inside so their parents can take a photo.

OK, so that’s Shrek, who some might term a beast. But what about the search for beauty? Well, let me introduce you to Dan Ostwick and his 1965 AMC Rambler Ambassador 990 convertible.

Not quite your idea of a beautiful car? Beauty is in the eye of the beholder and Ostwick searched far and wide to find this car. He’s retired now, but he had worked as parts and service manager from 1964-1987 for American Motors dealerships in Lincoln Park, Ypsilanti, Plymouth and Birmingham, Michigan.

As he entered his 70s, he started a quest to find a 1965, though he would have accepted a ’66, Ambassador convertible.

First, he drove to Illinois where the seller hadn’t bothered to mention that the car had been repainted with its doors closed and the exterior color didn’t quite match the original shade. Next he traveled some 750 miles roundtrip to upstate New York where, he was told, there was a terrific ’65 ready to drive home. What Ostwick found was a car with several components missing that he couldn’t even drive out of the seller’s driveway.

But just a few weeks later he heard about another one, this time in New Jersey. But before heading east yet again, he contacted a friend who lived in New Jersey in the summer months. The friend, who owns an AMC Pacer, checked out the car and said it looked good.

And it does. It originally was a California car, Ostwick discovered.

“I make excuses to go to town,” he said. “I drive it every day if the weather is good enough to keep the top down.”