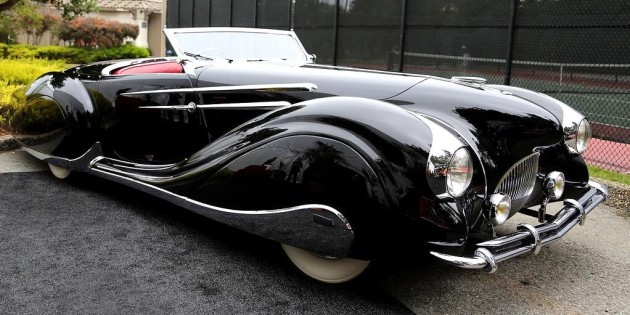 Coachbuilders Figoni et Falaschi created some of the most evocative automobiles of the Classic Era, their flowing streamlined designs most often adorning the greatest luxury and performance cars of the day.

The Delahaye 135M Narval, completed in 1947, is one such masterwork, an over-the-top example sold to the president of an Ohio ladies footwear company. The French beauty was used by the company in 1954 to illustrate a magazine advertisement, thus its nickname of Cover Girl.

The Delahaye will be offered at the Rick Cole Monterey Auction, which is holding its unique sale for the second year during the classic car week of auction and events next month.

The Delahaye will be joined by “35 additional hand-selected consignments,” the auction said in a news release. The cars will be on display at the Marriott Hotel in downtown Monterey with bids accepted from August 13-15. Rather than a typical auction sale with a live auctioneer, the bids are quietly accepted during the three days by Smartphone, online or by completing an absentee bidding form on site. Winning bidders will be announced at midnight on August 15.

Rick Cole pioneered collector-car auctions at Monterey 30 years ago, and after a lengthy hiatus, returned last year to stage his low-key but high-stakes sale. That auction resulted in $58.9 million in total sales for 36 cars, including the $23 million sale of a 1955 Ferrari 410 Sport race car.

One of seven built, the Narval was created for Delahaye’s sporting and competitive 135 model, which was introduced at the 1935 Paris Salon. Delahaye did not produce its own bodies, and the 135 became known for creative coachwork from a number of sources. The Figoni et Falaschi design was referred to as the Narval because of its protruding hood that reminding people of the tusked whale, while the curvaceous body seemed like it was gliding through water.

The Cover Girl car, Delahaye 135M chassis 800516, dropped out of view until the 1970s or early 1980s, according to the auction description, when it was partially restored by its Swiss owner and received an engine transplant from a Delahaye 135 show car with Antem cabriolet coachwork.

The sale of the Narval will include its original inline-six engine mounted on a display stand, the auction house says, and if the winning bidder desires, the engine-donor Antem cabriolet that is in deteriorated condition although with a replacement engine.

Part of the Narval’s history includes a full restoration at the hands of a young Craig Jackson – now chief executive of Barrett-Jackson – who finished the car in black with dark-red snakeskin leather upholstery. The Delahaye was sold at Barrett-Jackson’s 1989 auction to a Japanese collector who kept it in its restored condition until 2013 when it was transported to California by its current owner.

During 2014, the Delahaye was one of a handful of road cars ever displayed at the Indianapolis Motor Speedway Museum, alongside the Mercedes-Benz W198 Streamliner race car, and also appeared at the Amelia Island Concours d’Elegance.

“As an unqualified motoring icon and fabulously imaginative Figoni et Falaschi design statement, Delahaye 135M Narval 800516 stands today as the ultimate and one of the very last expressions of the French custom coachbuilder’s art form,” the Rick Cole auction said in its news release. “Uncommonly sensual in every respect, 800516 also marks the closing chapter of the Classic Era and as such, it is a CCCA Full Classic automobile that will be welcomed at virtually any concours and event.”

For more information about the Rick Cole auction in Monterey, see the auction website.