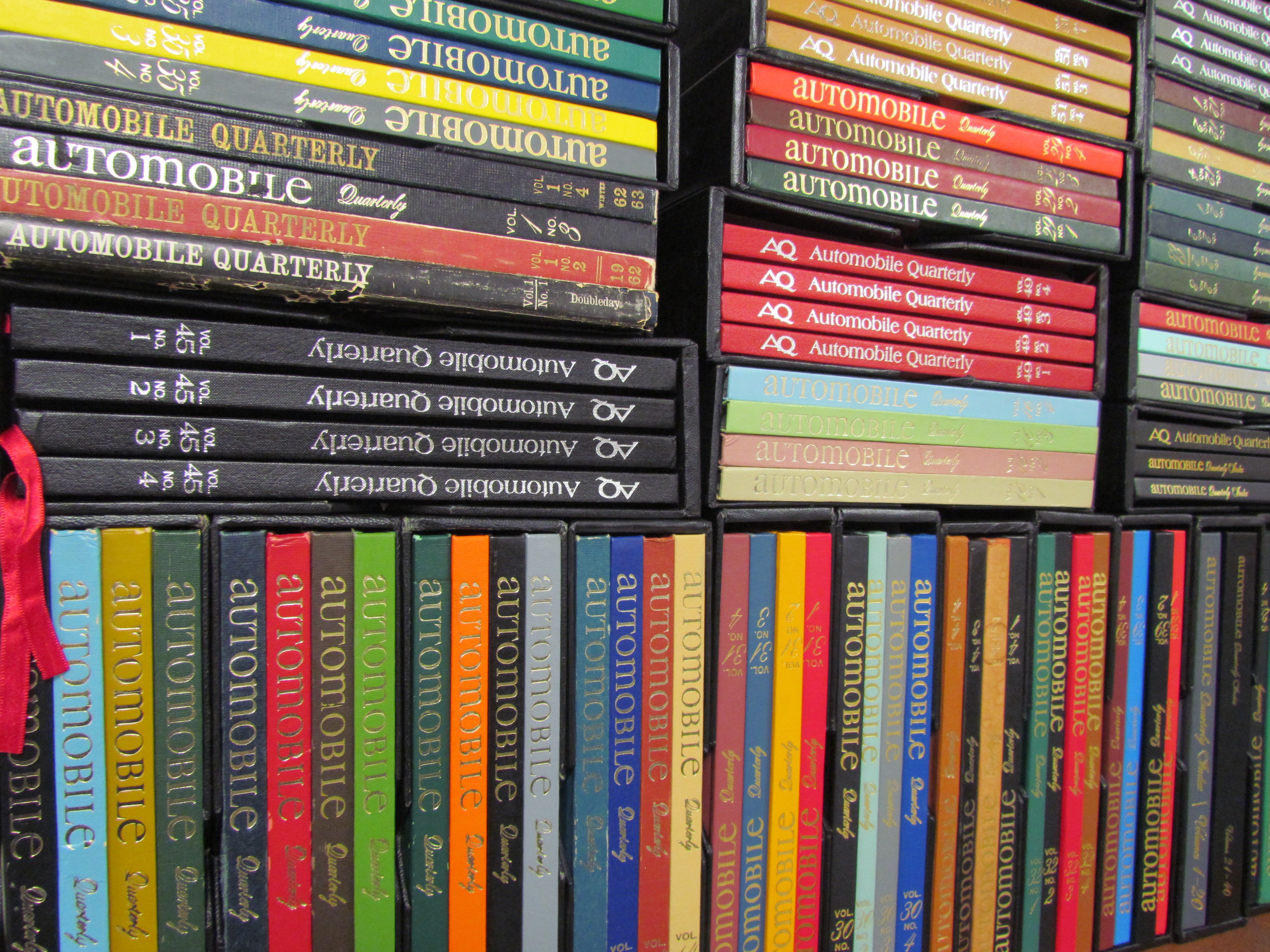 So just imagine what the price might be to buy the magazine itself, including the rights to its name and heritage as well as its reference library, editorial archives and the inventory of its publications, all of which are being offered for sale.

The magazine was launched by L. Scott Bailey, who had been editor of the Antique Automobile Club of America’s Antique Automobiles magazine, and by that magazine’s printer, Jacob Esser of Kutztown (Pennsylvania) Publishing Company. Their mission was to produce a publication “to truly reflect the grandeur, the majesty, the adventure that is the automobile.”

The plan was to produce a quarterly magazine, but a magazine that would be very different from the automotive “buff books” available on newsstands.

For one thing, AQ as it was commonly known would not accept advertising, and thus would be beholding to no one but its subscribers. Each would be printed on 112 pages of paper slightly larger than 8X10-inch stock. However, to better showcase photography and automotive artwork, it would be printed with a horizontal, landscape-style format.

Though a quarterly, there would be a fifth issue each year, a stand-alone book focused on a single automotive marque or other topic.

And to be “automotive literature” and “the final authority on the history of the automobile,” stories AQ would be scholarly, published with footnotes and references, documented facts instead of seat-of-the-pants subjective opinion, and written by experts such as automotive historian Beverly Rae Kimes, Griff Borgeson, Ken Purdy, Ralph Stein, Peter Helck, Karl Ludvigsen and others.

The magazine also would be bound within a hard cover like a published book. As Bailey once explained it, AQ would be “hardbound and durable enough to last a lifetime.”

And it did, outlasting Bailey, its editor and publisher from its founding until his retirement nearly a quarter-century later in 1986, and its final editor and publisher, Gerry Durnell, who bought the publication in 2000, because as his widow, Kaye, explained it, “so he’d have a job.”

Gerry Durnell was born in California but grew up on a farm in Missouri. He put himself through college, Southwest Missouri University — earning a seemingly unique double major in fine art and pre-med — by working as a rock ’n’ roll disc jockey and as an announcer for the Ozark Jubilee, the first network television show (ABC) to feature country-music performers.

During the Vietnam war, Durnell flew more than 180 reconnaissance and surveillance missions for the U.S. Army. Afterward, he returned home and served three terms in the Missouri House of Representatives.

After his political career, he moved to southern Indiana to be creative director at Abbey Press, only to discover that position would evaporate after 18 months. But he liked the area and opened an ice cream shop across the street from an amusement park in Santa Claus, Indiana, only to realize he also needed a winter-time business as well, so he added a pizza parlor and soon was publishing a magazine called Pizza Today and organizing an annual trade show for pizza parlor owners and their suppliers, a show that grew to become one of the biggest food-focused trade shows in the world.

A car enthusiast with an appreciation for all things mechanical, Durnell had tried to buy Automobile Quarterly, and finally did so in 2000.

Bailey and Kutztown Publishing sold their magazine in 1986 to CBS Publications, but it wasn’t very long afterward that new leadership at the television network decided to focus on broadcasting and sold its portfolio of print products to Diamandis Communications, the publishing empire led by Peter Diamandis.

Late in 1987, the U.S. stock market tanked and Diamandis had a loan to repay so he sold most of his magazines with AQ going back to Kutztown Publishing, which realized that the magazine had been a marvelous way to showcase the company’s quality as a publisher.

When Bailey, AQ co-founder and long-time editor, died in 2012, The New York Times noted that the magazine was “a cross between The New Yorker and the Encyclopaedia Britannica in the world of automania.”

“In the 24 years he ran Automobile Quarterly before retiring in 1986,” the obituary continued, “Mr. Bailey published an unbroken chain of gold-embossed quarterly reports that constituted a virtual archive of the known universe of the car: long biographical essays about racecar drivers, designers and forgotten inventors of breakthrough automotive technologies; historical dissertations on classics…”

His successors continued that tradition. However, even at its peak, and with its award-winning stories and photography, Automotive Quarterly did not exceed 30,000 subscribers. Times changed but AQ did not. Like Bailey and the editors and publishers who succeeded him, Durnell remained faithful to the original business plan. But as the subscriber base fell to a 10th of its peak and with no advertising revenue and a recession economy, income fell far short of production and printing costs.

After her husband’s death, Kaye Durnell made a major investment in AQ but could not justify another after publication of what would become the last issue. Now, she is selling what remains, including, should someone want to resurrect a publication with an impeccable reputation and strong heritage, the rights to the Automobile Quarterly name.