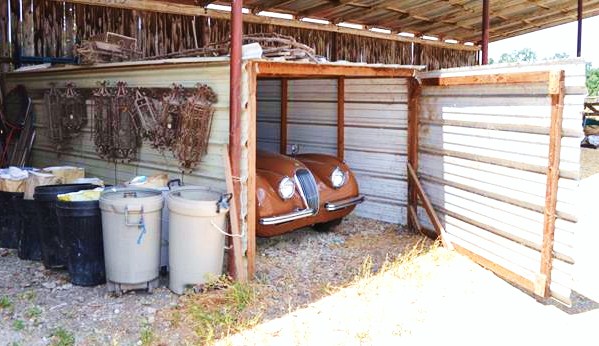 Rescuing a desirable classic car from long-term, often-neglectful storage is something akin to finding buried pirate treasure, or an old-masters painting in Aunt Tillie’s attic. They’re called “barn finds” whether they’ve been pulled out of a garage, a shipping crate or even a parking structure. In the case of the Pick of the Day, we could call it a “tin-shed find.”

Because that’s where this 1963 Jaguar XK120 roadster has been in hibernation for the past 17 years, according to the Santa Ynez, California, dealer who is selling the car for its third owner. The Jaguar is a lifetime California native, having been purchased new in Pasadena.

The XK120 was “discovered in this tin shed where it has been stored for the last 17 years,” the dealer says in the ClassicCars.com listing. “The owner claims it was driven just three years ago. Evidently a numbers-matching car with exception of the head which has been replaced. Odometer reads 93k miles.”

The dealer includes in the ad quoted comments from the current owner, who provides some family history of the car: “Great uncle bought it new in 1953, my dad bought it from him in 55, I bought it from my dad in 1966.”

The owner claims in his comments that the car “ran like a top the day it was parked.” The reason it was put in the shed and sat for so long was because the owner could not find correct batteries to fit, he said, which sounds as if he could have used some expert advice before giving up on the car.

The photos show a dusty Jag roadster that appears to be in decent condition with good paint and interior. Even the top looks usable. The owner notes that the car will need complete recommissioning to get it back on the road, but from the pictures, it seems that aside from the needed mechanical work, the sports car could be cleaned up rather than completely restored.

The pictures would have been a whole lot better if the seller had rolled the car outside the tin shed so potential buyers could take a look at the whole thing. As it is, we just get glimpses.

The Jaguar XK120 is a splendid British sports car, which took the world by storm when it first rolled out of Coventry. This was the first of the breed for the XK lineup, and its beautifully sculptural styling, strong power from its double-overhead-cam inline-6 engine and competition heritage makes it a highly desirable piece of motoring history.

The asking price of $79,800 seems reasonable as long as the Jaguar doesn’t need any major mechanical rebuilding, which can be pricey with these thoroughbred cars. But even so, there’s room for fixing up since according to the Hagerty Price Guide, the low-end value for one of these is $78,200 in poor shape while one in restored condition can bring $150,000. And those values are almost certain to rise in this booming marketplace.