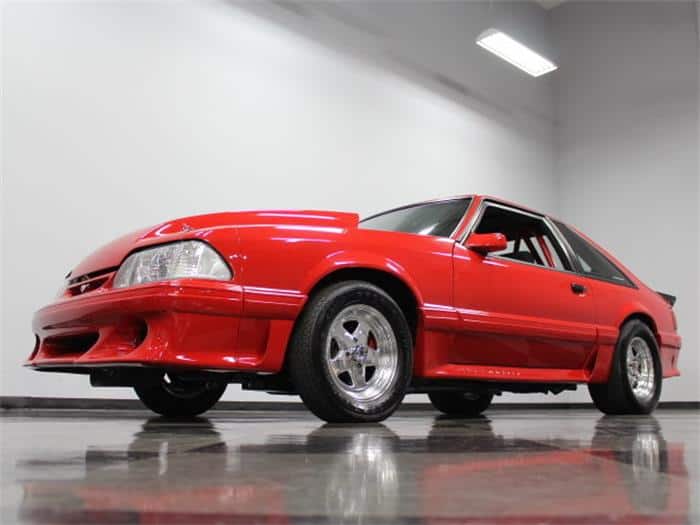 If you have a need for speed, like to hoon, shred tires and rip down the drag strip in seconds, then this bright Victory Red 1992 Ford Mustang GT is the perfect track monster for you. The Fox body mustangs have been growing in popularity, particularly with millennials on the drag strip, due to their light weight and ability to contain massive motors. This particular Mustang has been purpose-built to haul ass with no expense spared.

The body is flawless, according to the seller, who says on the ClassicCars.com ad, “During the build, it was all stripped and blasted to bare metal to create the perfect surface to spray a vivid finish of Victory Red PPG paint. As the car came back together, it received a 5 inch cowl hood to make clearance for what lays beneath.”

Propelling the car down the drag strip is a small-block 331-cubic-inch V8 built by Steve Schmidt. According to the seller, the motor dishes out 470 horsepower and has been pre-plumbed for nitrous with a purge release routed to the cowl.

The motor features AFR 205 aluminum heads, ported Victor intake manifold, a forged Scat rotating assembly and a custom-grind Comp Cam. A Quick Fuel carburetor feeds fuel and air, while an MSD Pro Billet Distributer, MSD Digital 6A box, and MSD wires spark the mixture. According to the seller, spent gasses are sent through Hooker headers and Flowmaster mufflers for a killer sound.

“The car also features a Performance Automatic Super Competition C-4 transmission that is equipped with a TCI 8-inch torque converter and 5,000 RPM stall. All of that torque spins an FMS aluminum driveshaft to an 8.8-inch rear end with 31-spline Moser axles and 4.30 gears,” the seller says.

The interior of the Mustang features an eight-point roll bar, while a four-point Simpson racing harness keeps the driver and passenger in the factory bucket seats. According to the seller, the rear seat has been removed for weight reduction and to allow for a pre-installed mount for a nitrous bottle to be added behind the roll bar. A Red Top Optima battery has been relocated to the rear of the car to distribute some more weight.

Tastefully gutted, the center console houses the ratchet shifter for the automatic transmission, while the dash houses only the necessities for getting down the strip. This means that only the Autometer Pro Comp tachometer, water temperature and oil pressure gauges are in place along with switches for the nitrous system. According to the seller, there is no air conditioning, no radio, not even windshield wipers. To help control the car, the Grant GT steering wheel even features a button for transbrake control.

Chassis reinforcement comes from a tied sub-frame and reinforced battle boxes., according to the seller. Maintaining stability is an AJE tubular K-member with AJE tubular control arms and Lakewood struts up front. Steering comes manually from a Flaming River quick ratio rack, while stopping power comes from drilled and slotted rotors on disc brakes up front, and new drums and shoes out back.

The Mustang is being offered at $22,995 from a dealership in Fort Worth, Texas. The seller says they will include receipts from the build process with the sale of the car.