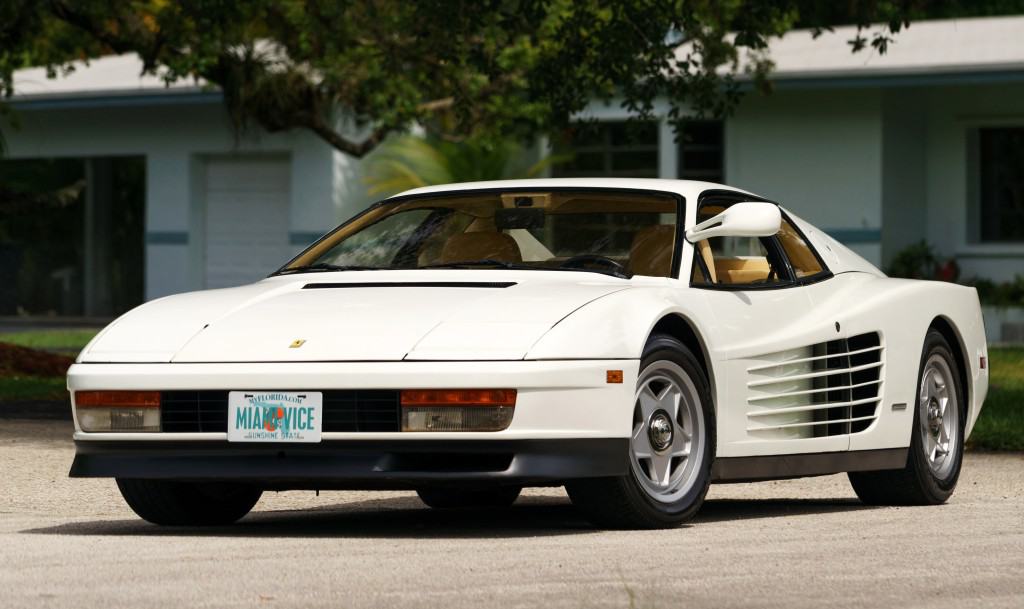 The most-memorable TV show that best exemplified the decadent and drug-addled 1980s was, of course, Miami Vice. Appealingly absurd, the trend-setting cop show was set in a pastel-hued landscape and mixed in beautiful cars with the beautiful people: Detectives Sonny Crocket and Ricardo Tubbs drove their “beat” in a white 1986 Ferrari Testarossa.

The Testarossa was introduced in the third season, reportedly because Ferrari had filed suit against NBC Universal over the use of a fake Ferrari Daytona Spyder that actor Don Johnson drove in the first two seasons. The Corvette-based replica was destroyed in the first episode of the third season, supposedly after Enzo Ferrari agreed to supply a pair of real Testarossas if the TV company would blow up the phony Daytona on screen. Which it did.

A black Testarossa was repainted white for the use of Johnson as Crocket and Philip Michael Thomas as Tubbs because producer Michael Mann wanted the car to show up better in the many night scenes, according to media reports. This became the “hero car” shown with the detectives on the show to replace the destroyed Daytona replica. The whereabouts of the other Testarossa was not available.

Nearly three decades later, the white 1986 Ferrari Testarossa from Miami Vice is going to auction, to be offered in August at Mecum’s sale in Monterey, California. The Ferrari has been authenticated by Ferrari North America and Ferrari Classiche, and shows just 16,124 miles on its odometer.

The Testarossa, powered by a 390-horsepower, 4.9-liter V12 linked to a five-speed manual transmission, was placed in storage in 1990 and was pulled out this year. The car recently received an $8,000 engine-out service (that’s a lot on a detective’s pay) and is now back on the road, according to Mecum.

The Miami Vice star status should boost the value of the Testarossa, although the car apparently did not sell late last year on eBay for the highly optimistic price tag of $1,750,000. The Hagerty Price Guide pegs the high-end price for a No. 1 condition Testarossa at $98,700.

We should probably expect a result somewhere in between those two numbers. That is unless a highly successful drug lord on Florida’s Gold Coast decides he wants to relive the fictional glory days and money is no object.