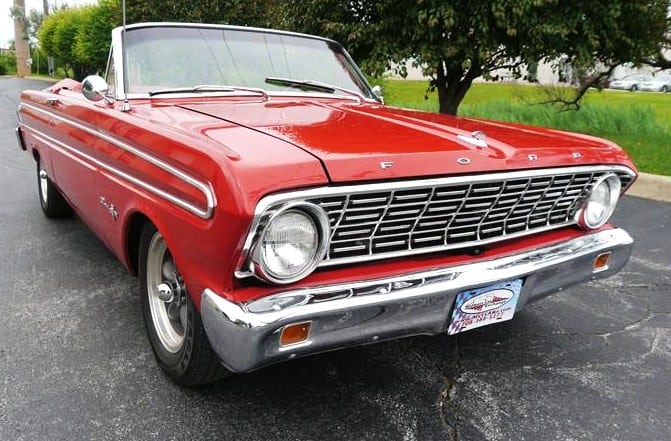 Resto mods spark plenty of controversy. The purists contend that classic cars should be left original while the “modists” counter that the updates make the cars drive and perform better while retaining original style and appearance.

The Pick of the Day is a good example of the resto mod ideal, an attractive 1964 Ford Falcon Sprint convertible with tasteful refinements that should make it a better car without losing its essence.

But first off, here is what the Aspil, Illinois, classic car dealer said about these cars in the ClassicCars.com listing: “Collectors today tend to recognize the Falcon Sprint for what it actually is: a compact muscle car.”

True, although that was the year that the Falcon-based Mustang arrived to steal the thunder. Like the 1964½ Mustang, the performance Falcons were powered by Ford’s 260 cid V8, which the following year grew into the well-known 289.

So while this sportiest version of the compact Falcon was born with a 260 V8, the one we see here has a later Ford V8 transplant, actually a “fresh 302 Cobra V8 fuel-injected engine,” the seller says, coupled with a highly desirable 5-speed manual transmission with a Hurst shifter. That’s a hot setup for this lightweight ragtop.

The handling also has been improved with a Mustang II front end with tubular control arms, which eliminate the shock towers, and rack-and-pinion steering. Inside, sporty upgrades include a wood-rimmed steering wheel and accessory gauges for water temperature and oil pressure, and a tachometer. The kinds of stuff a young street rodder might have done back in the day.

The seller describes the Falcon as having a very straight body with its bright-red paint job and shiny chrome. The car looks very clean in the multiple photos with the ad, including the classic red bucket-seat interior and the new-looking black convertible top. The American Racing wheels look correct, similar to those often seen on later Mustangs.

The asking price of $25,900 seems reasonable for this improved Falcon Sprint. Not a show queen (but what Falcon is?), the all-Ford resto mod treatment should make this a good driver for today’s roads and a desirable, envy-provoking entry for local car shows.

And the seller claims the Sprint is all ready to rumble: “Very good handling and performance – just get in and go!”