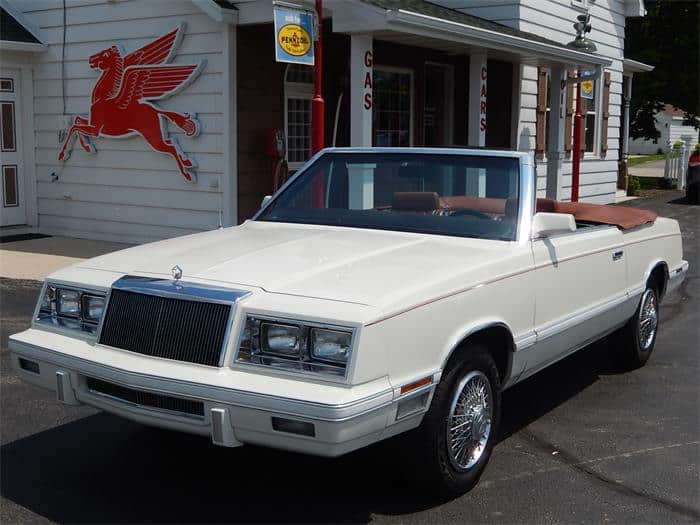 Back in the day, automakers worked with fashion designers to create special editions of various vehicles. There was the Bill Blass Lincoln Continental Mark V, the Gucci Cadillac Seville, the Nautica Mercury Villager (yes, a “fashionable” minivan), even a Levi’s Edition AMC Gremlin with blue-denim upholstery.

And there was the Chrysler LeBaron Mark Cross Edition.

Once upon a time, Mark Cross handbags and other leather goods were carried by the likes of Grace Kelly and F. Scott Fitzgerald’s wife, Zelda. And after being closed for several years near the end of the 20th Century, the brand is making a comeback after being relaunched in 2010.

Which brings us to this very low-mileage (only 16,400 miles traveled in one third of a century), one-owner 1982 Chrysler LeBaron Mark Cross Edition convertible being offered through an advertisement on ClassicCars.com by a private seller in De Pere, Wisconsin.

“This car has spent most of its life in California and has not been driven in the winter,” the seller writes in the advertisement. “The undercarriage is also very solid with some surface rust in areas but no rust in the floors. Please see pictures.”

There are 25 photos within the ad and they show an amazingly clean car, inside and out and underneath.

The seller also points out that the “body is in excellent condition with no noticeable dents or scratches.” The car appears immaculate in the photos.

Further, “the powered convertible top works smoothly and is in excellent condition. The rear window is clear.”

What set the Mark Cross Edition apart from other Chrysler convertibles of the era was its premium interior.

“The Mark Cross interior is impeccable and very clean with no rips, tears or stains in the upholstery,” the seller promises. “It is equipped with leather seats, power windows, locks, and mirrors, cruise control, cassette player, and more. Everything works including the air conditioner.”

The seller reports that the car is mostly original. “There has been some paint work done on both sides of the car to repair scratches,” the ad reads, and the tires have been replaced due to age.

And the car is in running condition. In fact, it “Drives like it was new,” the seller adds. Which may be a good thing or maybe not. After all, this is still one of Chrysler K-cars, powered by an automatically shifted 2.6-liter Mitsubishi-sourced inline four-cylinder engine rated at less than 100 horsepower.

The asking price is $9,977 and the photos show an exceptionally clean vehicle in remarkable condition after 33 years of very limited road time.

As long as you’re not in a hurry, this 1982 Chrysler LeBaron Mark Cross Edition convertible seems a reasonably priced way to attract attention at any local car show or cruise-in.