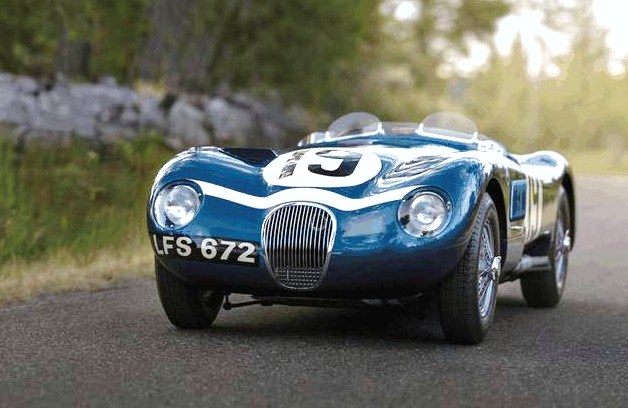 One of the most legendary Jaguar race cars, the 1953 Jaguar C-type Works Lightweight, will be offered at RM Sotheby’s Monterey, California, auction in August, marking the first time any of the three original works Lightweights have been at public auction.

Chassis No. XKC 052, the second one built, finished fourth overall in the 24 Hours of Le Mans in 1953 and later was raced by the Ecurie Ecosse team to multiple wins and podium finishes. After 1954, the C-type was driven privately by a number of famous racers.

RM Sotheby’s expects the rare and historic Lightweight to sell for more than $9 million.

The three Lightweights were the ultimate development of the C-type in which thin-gauge aluminum formed the body over the tube chassis. All C-types were powered by Jaguar’s powerful and durable dual-overhead-cam straight-six engines that generated 220 horsepower, and the cars’ mastery of winding road courses were enhanced by their pioneering disc brakes.

C-types were raced by Jaguar from 1951 through 1953 and then retired as the Coventry automaker rolled out its next generation of endurance racers, which became known as the D-Type.

“So dominant was their performance, the C-type literally sent the other manufacturers back to the drawing board in a panic, scratching their heads,” said Shelby Myers, car specialist for RM Sotheby’s.

“Everything that came before it was antiquated by comparison, and this Lightweight works example is one of the very best of the model. With the other two works cars securely in private hands and unlikely to ever be sold, this car’s offering at Monterey could very well be an opportunity that will never repeat itself.”

In the early 2000s, a British marque specialist replaced the race-battered body on XKC 052 with correct thin-gauge aluminum coachwork and finished it in the Ecurie Ecosse livery of Flag Metallic Blue with its original competition number 19.

Beautiful and purposeful, Jaguar C-Types are well-known nowadays for their prowess as vintage racers and have become highly sought-after, their sales routinely going into the multi-millions of dollars.

Terry Larson of Mesa, Arizona, a noted Jaguar historian and expert on Jaguar C- and D-type race cars, said that even after more than six decades, the C-type is still a remarkable car to drive and race.

“Having owned and raced a C-type for nearly 30 years, I have a profound appreciation for what a truly special car this is,” Larson said. “As your best friend on both the road and the track, there is good reason these exceptional Jaguars rarely come up for sale.”

For more information about the RM Sotheby’s auction August 13-16 at Monterey, see the auction website.

‘An excellent driver’ 1949 Buick from ‘Rain Man’ to be auctioned