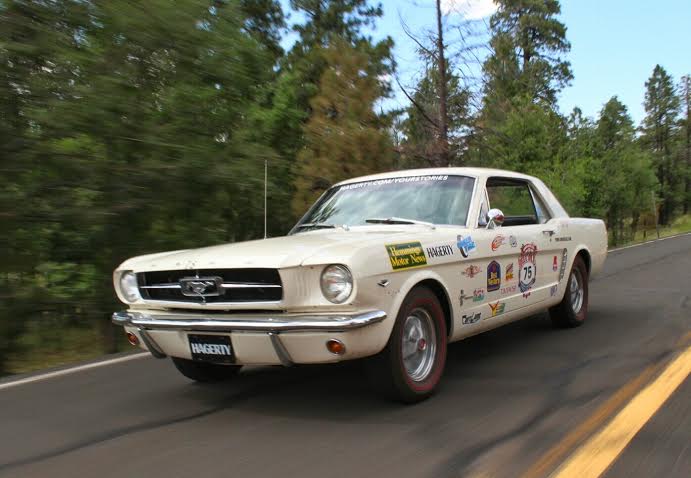 Hannah Mikula, a 22-year-old events-team intern at Hagerty, already has many fond memories of classic cars. But according to Hanna, her participation in the Great Race with her father is shaping up to be one of the best.

A highlight for Hannah has been seeing the landscape evolve as she and her father pass through many states that neither of them has seen before.

“I have never been to a desert before, and I have never seen a cactus before, which seems weird, but I’m really excited,” Hannah said. “It’s been fun seeing the places we don’t live.”

The Great Race is a timed/speed/distance rally on public roads from Kirkwood, Missouri, on Route 66 to Santa Monica, California, in a contest to determine which driver and navigator team can best follow the course instructions in the appropriate time, with points deducted for being late or early.

Hannah, of Traverse City, Michigan, is among the 120 teams competing in the 2,000 mile Great Race, along with her father, Karl Mikula, in a Hagerty employee-restored 1964 ½ Ford Mustang.

“Yesterday was a tough day for us,” Hannah said. “We took a wrong turn and we were completely off, got lost in this neighborhood that was like a maze.”

She and her dad have been doing great since then, she added, and hope to make up some lost time to get higher on the list of top scorers.

The biggest challenge they have had to face is finding the rally signs for checkpoints and being confident in their own decisions and choices.

“Not watching the cars around us has been hard,” she noted. “Other people can make a mistake and you don’t want to be like, ‘Oh well, that car turned now maybe I have to.’ We try to be really confident with ourselves and we communicate great.”

While participants in the race can switch off duties for who is driving and who is navigating, Hannah and her father have committed to their roles with Hannah saying she doesn’t want to navigate because her father is better at it then her.

“I’ve driven the whole way,” she said. “We made the choice not to take turns because I accelerate and stop differently than him, and we calculated everything based off how I drive, not him, so it would throw off our times a bit if we changed that.”

The 1964 ½ Mustang that Hannah is driving does not have power steering or air conditioning, but that hasn’t stopped her from falling in love with the classic pony car.

“It’s a company car so I can’t take it home with me, and I am a little sick of driving, but I love this car. It’s a lot of fun to drive.”