Classic cars rally across the United States in Great Race 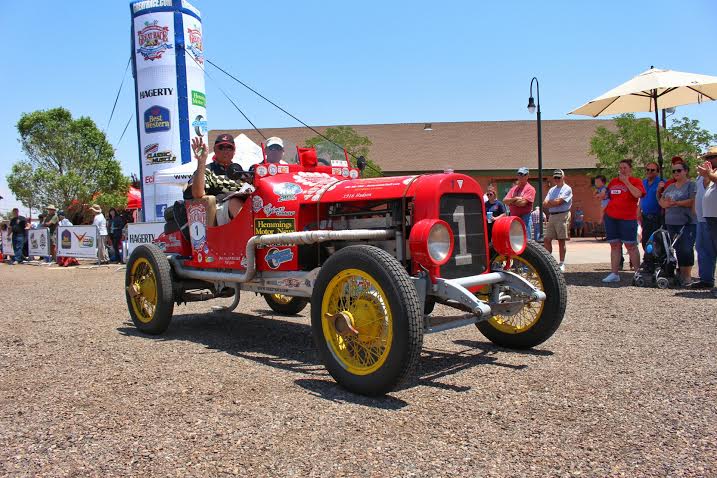 The 120 antique, vintage and classic cars taking part in the Great Race rolled into Winslow, Arizona, for a lunch break Thursday on their way to Santa Monica, California.

The 2,000-mile, eight-day trek started out in Kirkwood, Missouri, on Route 66 and crossed Oklahoma, Texas and New Mexico before stopping in Arizona.  The colorful band of participants spent the night in Flagstaff, Arizona, before heading out for the remainder of the trip.

The Great Race isn’t actually a race but a timed/speed/distance rally on public roads to determine which driver and navigator team best adheres to the course instructions, while testing the endurance of both the cars and the people on board.  Each rally segment must be driven in a set amount of time; arriving early is just as bad as arriving late, and points are deducted.

Drivers and navigators were noticeably exhausted as they arrived in Winslow, most not accustomed to the Arizona heat in addition to this being their fifth day on the road. Some of the old cars appeared to be exhausted as well, stalling out in the parking lot, while other cars continued to roar with life.

The racers were coming from an overnight stay in Gallup, New Mexico, with the stop in Winslow as one of 18 stops included in the Great Race. Half of the stops are 60-minute lunch stops and half are overnight stays.  The ralliers are usually greeted with a party atmosphere at the stops, with crowds of spectators and impromptu local car shows.

The most eye-catching cars included a cream 1964½ Ford Mustang driven by Hagerty events intern Hannah Mikula with her father, Karl, serving as navigator; a Bugatti Atlantic tribute car driven by a husband and wife team from Vicari auctions; and a Nissan GT-R imported from Japan and driven by members of Team Japan.

Most of the cars participating are not equipped with such modern luxuries as air conditioning, power steering or power brakes.  Some of the older cars compete without roofs or effective windshields so that the team must bundle up with masks, goggles, hats and long sleeves.

After having a barbeque lunch provided by the city of Winslow during their 60-minute break, the racers made their way west to Flagstaff to spend the night.

From Flagstaff, the racers will stop in Kingman and Lake Havasu City, Arizona, before entering California and finishing the race on Sunday in Santa Monica.

The cars competing in the Great Race must be model year 1972 or older, and the older the vehicle, the more positive adjustment is applied to its daily rally score.  The oldest car to have participated in the cross-country trip was a 1907 Renault, which finished the event.

The participants vary greatly in skill and experience, a few of them retired professional race drivers, but most of the teams consist of family teams, such as father and daughter or son, or even grandparent and grandchild, all of them sharing  a love for classic cars.