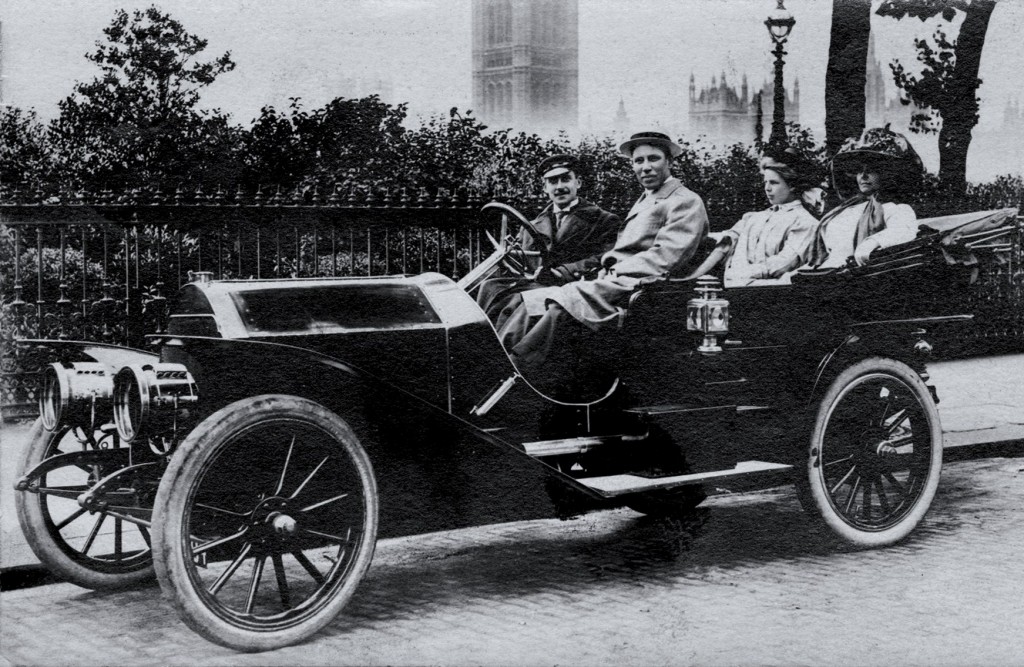 Illustrating the pride of Dayton, Ohio, this picture shows a Stoddard-Dayton Model 9K posed in London. The building in the background appears to be Britain’s House of Commons or Parliament Building, and the picture might have been taken from the embankment across the Thames River.

The Stoddard name was already well-established and respected within Dayton. It was John Stoddard’s farm-implements business that put Dayton on the map as a center for industrial production. Together with his son Charles, the two would turn to automobile manufacturing with the Dayton Motor Car Company in 1905.

In 1907, they introduced an engine of their own design and by 1909, they manufactured most components for their cars within their own factory complex.

The company had North American representatives spanning from the Atlantic to the Pacific and from Canada to Texas, although I could find no reference to a London agent. It is certainly possible that a wealthy family shipped their Stoddard-Dayton for a European tour, which was not uncommon at the time.

Stoddard-Dayton earned a reputation for fast, reliable cars, and they competed in and won many tests of endurance and speed. Unfortunately, the Stoddards made an error in judgment when they decided to merge with the recently formed United States Motor Company in 1910. The brainchild of Benjamin Briscoe, the company was an effort to consolidate many automotive brands, a prevailing movement in the industry at the time.

United States Motor Company would buy up 11 companies – including, Maxwell, Columbia, and Brush – before going bankrupt in 1913. A reorganized Maxwell bought up the assets of the Stoddard-Dayton company, but the name was never revived.

A few years later, the Maxwell board would entice Walter Chrysler to lead the company. With a deal that allowed Chrysler to gain controlling interest, he founded the Chrysler Corporation and retired the Maxwell name.