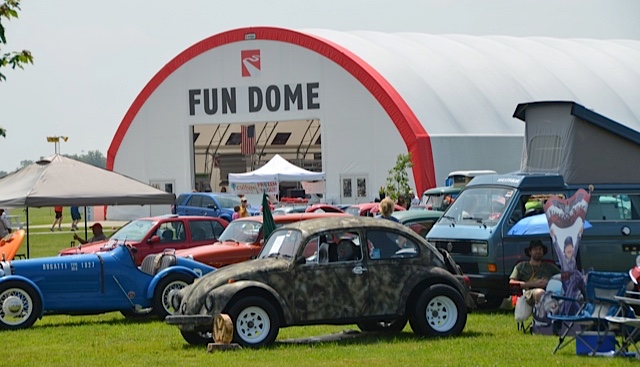 Mike Yager bills himself as the chief cheerleader at Mid America Motor Works, which is located on a 200 acre campus in Effingham, a city in southern Illinois. One of the annual events hosted by Yager and his family is the VW Funfest, a gathering and celebration for air-cooled Volkswagens billed in its 17th edition as “Cars and Stars” and featuring the legendary Bruce Meyers, creator of the Meyers Manx. Also shown was a 30-minute sneak peak of the new documentary The Bug Movie.

Over a three-day weekend, the VW Funfest kicks off with a Friday evening, 20-mile road tour Fun Run of over 400 VWs rolling through the countryside surrounding the crossroads of America — the intersection of I-57 between Chicago and Memphis and I-70 between Indianapolis and St. Louis. The Fun Run ends in downtown Effingham with a Welcome Fest hosted by the local chamber of commerce.

About 900 or so VWs and their owners attend the VW Funfest from nearby areas of Illinois, Indiana, Iowa, Missouri, Wisconsin, as well as from as far away as New Jersey. From the Beetle to the Type 2 Bus, to Westphalia Campers, the 181 Thing, a few Type 3s, a rare 412, Karmann Ghias, and many dune buggies and sand rails, all are on hand for fellow VW enthusiasts to enjoy.

Yager and I became acquainted about six year ago when he purchased my all-original 1977 VW Beetle convertible. Now when I attend I get to visit with my VW cabrio that I spent so many years enjoying.

Meyers shared his experiences with the creation of the Beetle-based Meyers Manx Dune Buggy, spinning yarns of his times with six-cylinder Corvair-engined dune buggies running rings around many other cars.

Tory Alonzo, a producer of The Bug Movie, screened a 30-minute preview of the documentary. The finished movie is expected to be released at the end of this summer and run for about 1 hour, 40 minutes.

The VW Funfest includes a Fun Dome that is chock full of VW accessories as well as VW-themed decor and apparel. VW specialists are on site to upgrade Volkswagens with performance parts, accessories, add-ons and to do general tune-ups. Seminars provide guidance and expertise on how to restore, repair and maintain air-cooled Volkswagens.

The huge Mid America campus includes Yager’s MY Garage Musuem with its VW Collection on display throughout the weekend around the Funfest grounds. Meanwhile, visitors to the museum can see Yager’s amazing Corvette collection and peruse MY Treasures, a selection of automotive memorabilia and vintage collectibles for sale from Yager’s collection.

Many show participants camp right on the VW Funfest grounds, and there were many a VW Camper in sight. Food is abundant and Saturday eve wraps up with live music from the Funfest Amphitheater Stage.