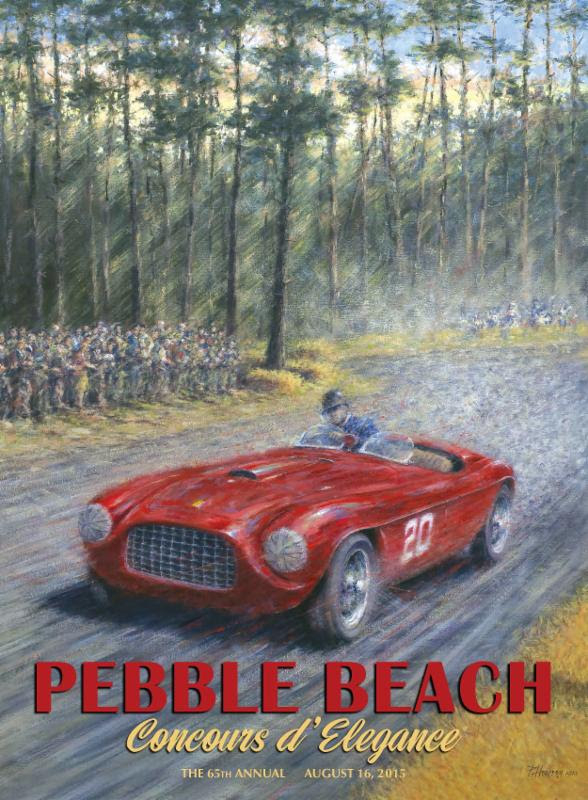 The Pebble Beach Concours d’Elegance has unveiled its main event poster for 2015, a depiction of the first Ferrari to race in California painted by the acclaimed Peter Hearsey.

The poster shows the 1949 Ferrari 166 Mille Miglia owned and driven by Jim Kimberly in action during the second annualPebble Beach Road Races in 1951. The Ferrari was a favorite to win after its resounding victory a few weeks earlier at Palm Springs.

But just about halfway through the race on lap 20, Kimberly lost control and the Ferrari flipped over a hay bale and landed upside down. What happened next was pure Hollywood, according to a press release from the Pebble Beach Concours:

“The crowd gasped but the driver emerged from the wreck unscathed, and like a scene from a movie, Kimberly’s date for the weekend, actress Ginger Rogers, raced to his side, leaned over and kissed him on the cheek.”

Kimberly’s 1949 Ferrari returns to Pebble Beach on August 16 for the 65th annual concours, where it will compete in this year’s special class that honors Ferraris that raced on the winding roads of the Del Monte Forest in Pebble Beach.

On the morning of August 14, the Friday before the Concours, a closed portion of the old Pebble Beach Road Race course will be reopened so that the racing Ferraris can appear there once again. They will gather at the start/finish line at 10 a.m. for parade laps, and spectators are welcomed to attend.

Hearsey’s poster shows the beautiful 166 Mille Miglia roadster racing through the forest at speed with a crowd of spectators watching.

“I have tried to keep the image loose in order to suggest speed and to capture the feel of the landscape,” Hearsey said. “The main thing was to try and capture the car’s inherent purity.”

A longtime member of the Automotive Fine Arts Society, Hearsey also created the event poster for the 2009 Pebble Beach Concours.

For information on the events of the 2015 Pebble Beach Automotive Week, see the concours’ website. To view more works by Peter Hearsey, visit his website.