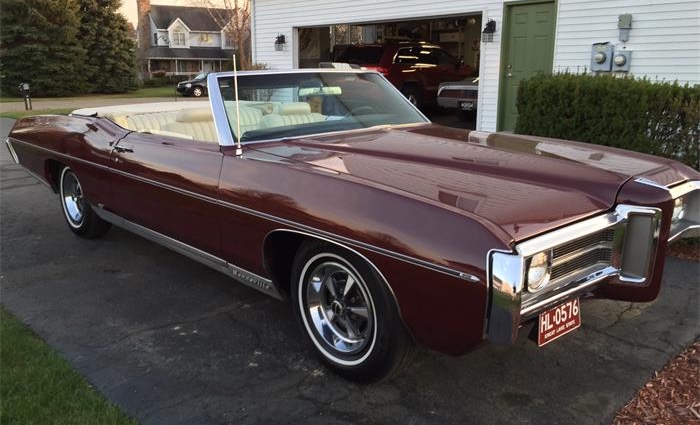 Once upon a time in America, people drove long and large, and in cars to which those adjectives also applied. But there was something even more special about the cars in this era: They not only were long and large but had powerful engines and, best of all, roofs that could be retracted from above the passenger compartment to provide an open-air driving experience.

If those words have you thinking about the 1930s and cars by Duesenberg and Packard and such, you need to fast forward a few decades. We’re talking here about the post-war era — the 1950s and ’60s — when the likes of GM and Ford were producing full-size convertibles with two full, wide and roomy rows of seating.

Such a car is our Pick of the Day. It’s a 1969 Pontiac Bonneville convertible make this the link being offered on ClassicCars.com as a “fisbo,” the shorthand term for For Sale By Owner. ‘Fisbo’ is a pretty common expression, long used in real estate. I recast so that it doesn’t sound like we think we minted it.

In this case, the owner is in South Lyon, Michigan, and reports to be only the second to have possession of this car since it was brand new.

“It’s been very well-maintained,” the seller writes, adding that “I have lots of documentation including the protect-o-plate, owner’s manual, service manuals, wiring manuals, etc…”

The seller calls the car “beautiful,” and based on the 10 photos submitted with the ad, it’s hard to argue that statement.

The owner reports the car is all original except for new brake lines, drums and master cylinder installed a year ago, as well as the addition of a dual-exhaust set up.

Yet after only 75,000 miles, the burgundy paint still shines, and the owner adds that the original rear-wheel skirts — which would make the car look even longer and lower — come with the car.

The car has power brakes and power steering and is powered by its factory-installed 428-cubic-inch V8 engine, which links to the rear wheels through an automatic transmission.

The asking price is $19,000 (or best offer), which seems a good deal for a big boulevard cruiser from a classic era of big American convertibles.