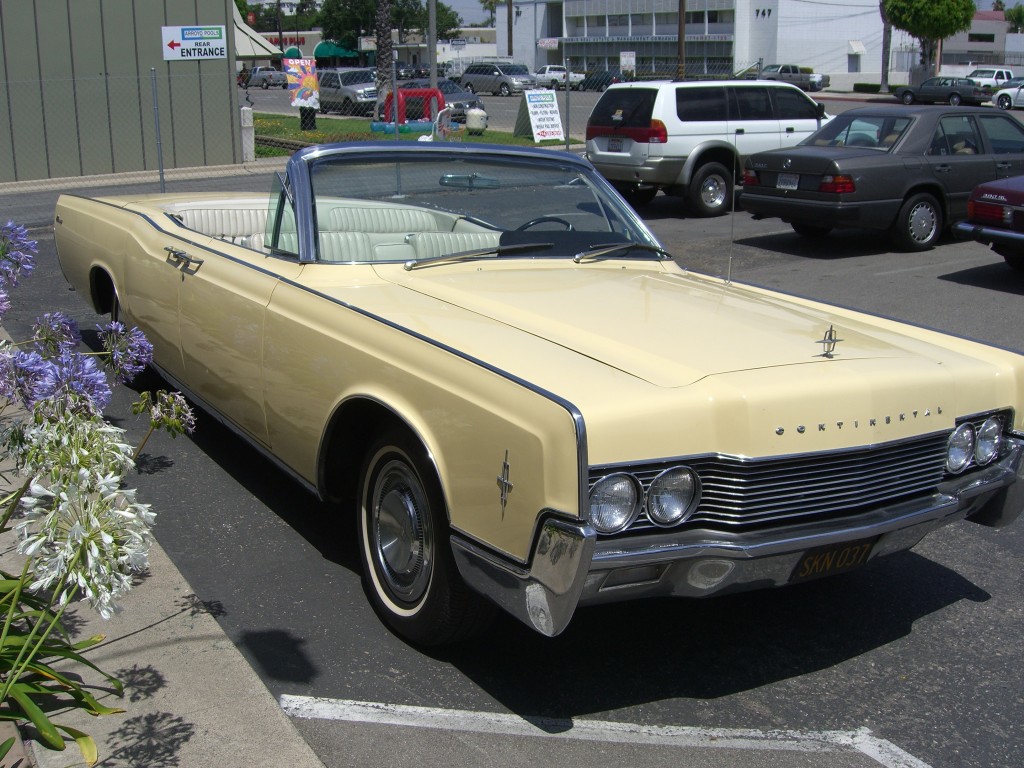 I was 11 when I first saw a new yellow Lincoln convertible in the school’s parking lot in San Mateo. It belonged to one of the teachers at my elementary school. The top was down, showing its white interior. It truly was love at first sight. I swore that someday I would have one.

My campaign at home to buy one didn’t go over too well. My father had a solid white-collar job. My mother didn’t work. But because there were two children and a dog, we belonged to the obligatory station wagon set. I even presented the “used” car idea.My father declared that we never bought and never would buy a used car because “it would just be buying somebody else’s problem.” He could not fathom anyone getting rid of a car unless it was dropping parts in the road.

Fast forward a few decades. I watched eBay for ’61-’67 Lincoln convertibles. In the spring of 2010 I came across an auction for a 1966 Lincoln convertible, yellow with a white interior. I just had to bid on it. I was sure that someone would outbid me but I figured at least I tried. The auction ended two days later. I had been the high bidder the whole time and won the car! We drove down to Orange, California, to pick it up. I was so excited that night that I wound up in the ER with chest pains that turned out to be indigestion.

I named the car “Joan” after the voluptuous secretary on Mad Men because I imagined that she would drive a car like this one.

I had Joan for three summers. For reasons still unknown even to myself, I sold her on eBay. A man named Martin in eastern Ohio bought her. I had an agreement with Martin to give me “first dibs” if he ever wanted to sell it. A few months after receiving the car, Martin decided to ship her to a Lincoln guru in Colorado for all sorts of restoration. While the car was on the way, Martin dropped dead.

The guru wound up having to pay for the shipping and consequentially bought the car.

In September, 2013, I tried to get in touch with Martin only to find his online obituary. On that same day, since I had not looked at eBay Motors for a while, I searched current and past auctions of convertible Lincolns. To my dismay, I discovered that I had missed buying Joan by less than three weeks.

I immediately called the guru and asked him to pass along my number to the new owner with the message that if he ever wanted to sell, to please call me first. The phone rang five minutes later. It was Owen, the new buyer who lived in Connecticut. We had a pleasant conversation and I reiterated my “first dibs” request and he agreed to call me first. I exchanged text messages with him last autumn, just to remind him that I was still around and interested.

I had smartened up and was having eBay contact me whenever any Lincoln convertible was listed — just in case. Early one Sunday morning this past April, there was a 1966 yellow Lincoln convertible listed. A quick check of the VIN and it was confirmed — it was Joan. The car already had over 300 views in just a few hours. I hit the “Buy It Now” button so quickly and with such force that I almost put my finger through my tablet.

I was understandably upset that I had not been notified first. Owen contacted me about some details and I responded on my husband’s phone through a text so he did not make a connection. Owen stated that he was going to be in our area on business that week and suggested that we get together for lunch and I could give him the check for the balance at that time. We met as arranged. He was still unaware who I was. I gave an Academy Award performance of being perfectly non-chalant about the whole experience. When Owen asked me if I had ever owned another Lincoln, I could honestly look right at him and say “no,” I had only owned this one.

The charade continued. I refused to get excited until the car was on the ground in front of my house. When it was delivered, I texted Owen on my phone and told him how pleased I was to have Joan back again, and very truthfully how I had been prepared to pay much more than I did. He connected the dots and tried to call me. I deleted his voice mails without listening to the messages. Subsequent texts from him were not read and deleted.

Owen had kept meticulous records of any work he had done on the car. I am positive that near the front of his file was the phone number for me, the guaranteed buyer.

Joan is back with me now, never to leave again. Considering the long and winding road that Joan took, I should have lost track of her after Martin’s demise. We are, as expected, thoroughly enjoying every minute with her.

Somewhere along the time line, I suddenly remembered the first name of the teacher who owned the original Lincoln that I had first fallen in love with so many, many years ago. Ironically, it was “Joan.”