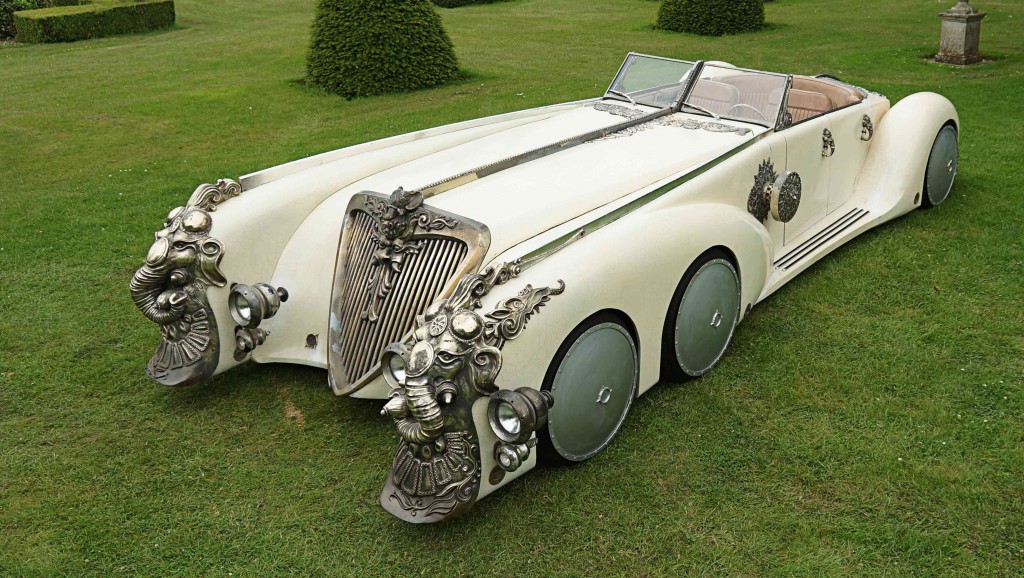 The six-wheeled Nautilus car from the movie The League of Extraordinary Gentlemen is included on the docket for the Coys auction taking place July 11 at Blenheim Palace in England.

The car, designed by the movie’s art director, Carol Spier, is one of two produced for the movie which starred Sean Connery. The car being sold is fully functional, according to Coys’ news release. The second car was rigged with scaffolding for the filming of Connery’s close-up shots, Coys said.

“We have a long tradition of selling film, television and celebrity cars, and having such a cool car from such a cool film is really exciting,” Coys managing partner Chris Routledge said in the news release. “We are offering an unrepeatable opportunity to acquire one of the cars that actually appeared in The League of Extraordinary Gentlemen and which will undoubtedly increase in value in years to come.”

The vehicle is based on a Land Rover fire tender, with a special steel frame and a Rover V8 engine. The bodywork is ivory-colored fiberglass. Inspiration for the elaborate decoration comes from the Hindu god Ganesha and various flora and fauna, Coys said. Interior trim is faux leather but with original Land Rover gauges.

“The car retains most of its original functionality and shows signs of wear and evidence of running repairs from on-set use. In spite of this wear, the car is in running condition,” Coys said.

The car has been part of a collection of movie props and costumes at the Prop Store’s UK facility, said Coys.

“I bought the Nautilus from the film company after The League of Extraordinary Gentlemen came out because I loved the car, loved the design and felt it was one of the most emotive vehicles I have ever seen, a true design icon,” said Stephen Lane, founder of the Prop Store. “I have taken it to Essen, driven it at the Lord Mayor’s Show and now feel it’s time to let somebody else own it and enjoy it.”