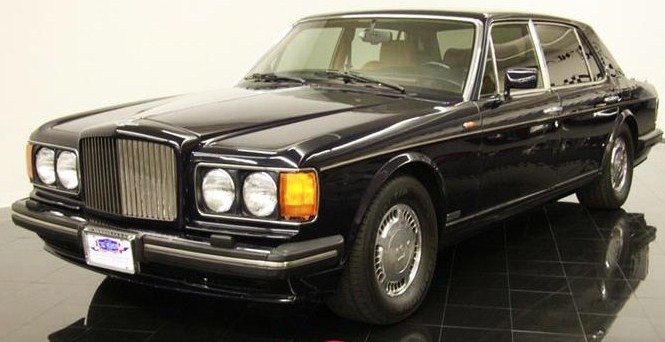 From the 1950’s through the early 1980’s Bentley cars were for the most part badge-engineered Rolls-Royces with the only difference being the grille and the logos. This all changed in the late 1980’s with the launch of the Bentley Turbo.

The Turbo was a look back at the sporting Bentley cars of the 1920s and 1930s, offering incredible luxury matched with serious performance. These were 6,000-pound sedans that could cover 0-60 in 7.5 seconds and reach top speeds in excess of 150 mph. Think of the Turbo R as a high-speed boardroom and you get the idea.

The cars were unbelievably expensive when new, selling northward of $100,000, in 1980s dollars. These days, those same cars have become serious bargains, and it is hard to think of a car offering more bang for the buck than a nicely sorted Bentley Turbo R.

This 1993 Bentley Turbo R in Midnight Blue Metallic paint is exactly what you want to buy in a used Bentley. It has a complete service history, dealer serviced since new and up to date on those services.

According to the advertisement on ClassicCars.com, “This Bentley was delivered to its first owner in Greenwich, Connecticut, in January of 1993 and only driven a few thousand miles until he moved to New York City in 1999. The car was sold to the next owner in Florida in March of 2004 with 38,000 miles. This owner also drove the car only sparingly and when he passed, was part of his estate sale.”

The car was inspected and fully serviced by the seller and now has a total of 55,193 miles on the odometer, the seller states, and includes its full tool kit, safety triangle, two sets of keys, valet key and original leather owner’s folder with all manuals.

This car is offered for sale by the St. Louis car museum, and the asking price is a very fair $32,900. This Bentley looks to be a car that you could enjoy for decades.

Plus, it gives you the priceless opportunity to say to your spouse, “Shall we take the Bentley this evening?”