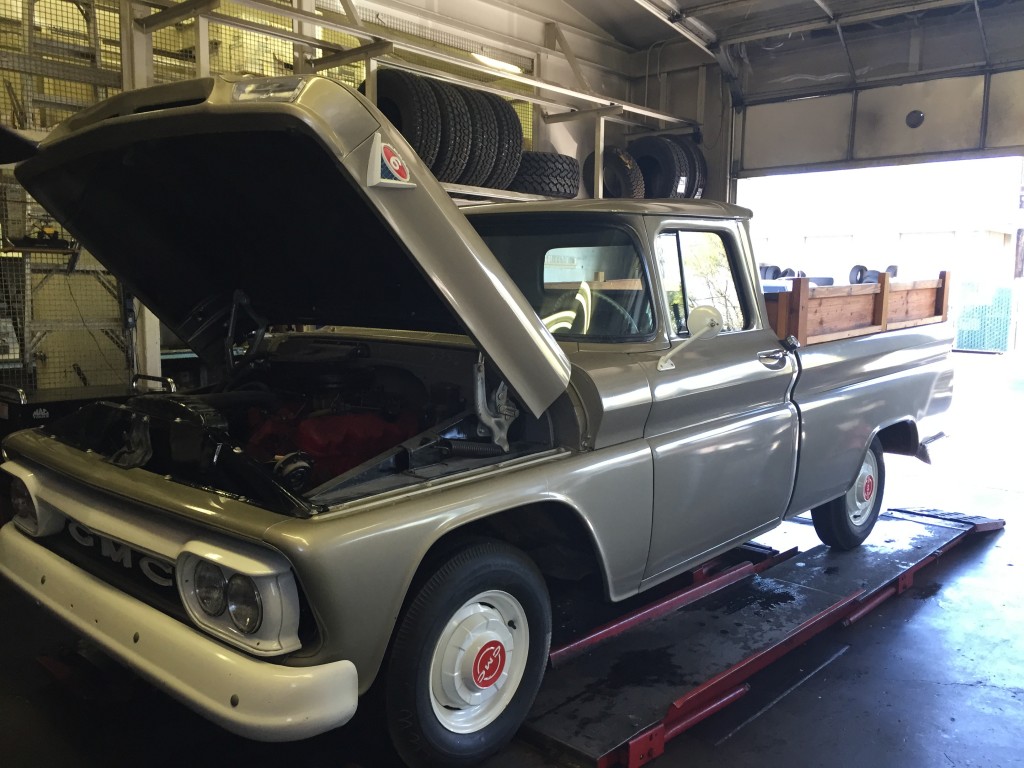 My most amazing barn find — and it was a gift!

My friend Bill from church had been after me for over a year to come look at a truck he wanted to give me. I had been to his house in the past and remembered seeing a late ’70s GM 4X4 in his yard that had been used as a work truck. Quite honestly, I wasn’t looking for a project and had put it off. But he asked again and said I would, because I figured I could help him get rid of it.

Finally one day I took my son and went by his house to look at the truck more closely. Bill wasn’t home and the old 4X4 was no longer in his yard.

A few weeks later, I ran in to him at church and mentioned that I had been by and it looked like he may have found a good home for his truck. Bill looked at me kind of puzzled and said no, that was not the truck he wanted me to have, the truck he wanted me to look at was in the garage. So a few weeks later I called and went back to his house. After we visited for a minute, he took me into his garage.

I could see the corner of the rear quarter panel and could tell it was an early to mid ‘60s short-bed fleet side. He had it partially covered and as I pulled back the cover, I asked Bill if he recently had it painted because it looked brand new. He said no, it was the original paint. The way it was stored, I couldn’t get to the driver’s door but I could open the hood. When I opened the hood and saw the fresh red paint on the V6. I asked if he recently had it rebuilt and he said it was the original motor, never been touched. I looked in the bed and there were no scratches on the painted wood and I asked if ever hauled anything and he said he made a few trips with it to Lake Tahoe.

I asked Bill if he was sure he wanted to get rid of it and he assured me that he wanted me to have it, so I made arrangements to have it towed to my shop.

The following Monday it was towed in and unloaded in front of one my service bays. I finally got to open the driver’s door and was amazed to find it only had been driven 1,462 miles.

I simply rinsed of the dust, toweled it off, pushed it into the service bay and took these pictures. The tires in the photos are original and were holding air. He gave me the original bill of sale, registration, owner’s manual and license plate.

I called Bill later that day to tell him that it had arrived and asked him how/why it didn’t have any miles and he said soon after he purchased and added the side boards shown in the pictures, his mother passed away and he had inherited several other vehicles so he didn’t drive it. He garaged it, kept it covered, cleaned it occasionally and kept it started from time to time until one time it wouldn’t start so he took the battery out and figured he’d get to it eventually.

Bill turned 90 this year and realizing that the engine had probably frozen up from sitting, he figured somebody would have to completely rebuild it and it would probably cost a lot of money. Knowing that I owned a shop and had collected old cars he decided he wanted me to have it.

At this point we have soaked the engine in oil and turned it over by hand to bring oil up to the top end. We added fuel and it fired right up. The carburetor and fuel pump were leaking so we replaced the gaskets, found an N.O.S. fuel pump, and replaced the rest of the fuel lines. So far the engine sounds like I remember the 305 did when new.

We are putting in new piston rubbers for the brake/clutch master, clutch slave and wheel cylinders, flushing the brake fluid and this truck should be brand new and original in every way. The window regulators needed a little TLC to get moving again. The original 3 on the tree shifts smoothly.

This being a garaged northern Nevada truck, it has absolutely no signs of moisture, condensation or rust. The glass, door rubbers, lock mechanisms, everything, etc. are perfect. Bill even removed the wiper arms so that they wouldn’t stick to the windshield. They wiper blades are original and like new. The only thing not original is the new battery we put in to start it.

This truck is not even broken in and my challenge is to not drive it as I believe that there will never be another chance to find a brand-new all-original 1962 GMC like this anywhere else in the world.