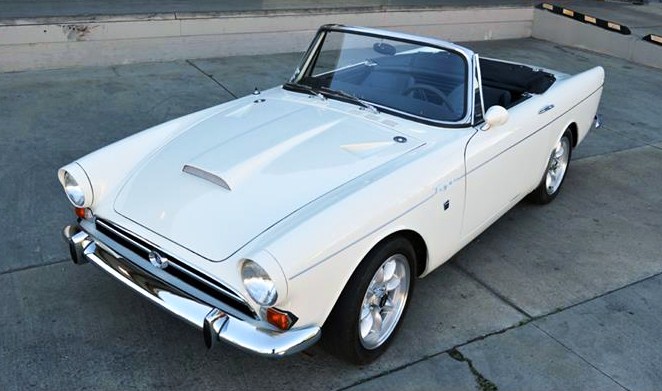 The Ford-powered Sunbeam Tiger once was perceived as the poor man’s Shelby Cobra, being a similar concept of shoehorning an America V8 into a British roadster. But now, Tigers roar with their own performance magic and strong values.

Our Pick of the Day is a 1966 Sunbeam Tiger MK1A that the private seller describes as a one-enthusiast-owned car that is original and unmolested.

“This survivor Sunbeam Tiger has not been restored, only maintained and repainted,” the San Diego seller says in the ClassicCars.com advertisement. “There are only so many opportunities remaining to become a ‘second owner’ of a classic car of this rarity and original ‘survivor’ condition.”

The Sunbeam was originally purchased in 1967 by a renowned Tiger restorer, expert and concours judge, the late Dick Barker, whose family is selling the car. The Tiger comes with original documentation, invoices and photographs showing that “both he and his family have had a lifetime of enjoyment from this rare Sunbeam.”

In the early 1960s, Carroll Shelby was involved in the creation of the Tiger at around the same time he was making waves with the Cobra, although the Sunbeam never reached that level of success. The cars started out as standard four-cylinder Sunbeam Alpines into which 260-cid Ford V8s (later updated to the successor 289) were transplanted.

The project ended after about 7,000 Tigers were built when a controlling share of Sunbeam’s British parent company, Rootes group, was purchased by Chrysler. The Detroit automaker was loathe to market a halo car powered by a competing company’s engine, and since there was no Chrysler V8 that would fit into the tight space, production of the Tiger ended in 1967 when the last of the Ford V8s were used up.

The Tiger has long been a favorite among dedicated British sports-car fans, but it now has gone mainstream as a desirable collector car. The cars also have a fairly strong competition history; Barker was well-known as the restorer of one of three Sunbeam Tigers that competed at the 24 Hours of Le Mans, a coupe that was known as “The Mule.”

“As one would expect, his own car benefited from the same fastidious nature and passion,” the sellers says.

The seller describes the Sunbeam as being “virtually rust free” and running well, although it does have the patina of regular use.

There is one discrepancy in the ad that would have to be cleared up by a potential buyer. Although the car is described as original, down in the details section it says that the engine has been replaced.

Still, the asking price of $69,000 seems like a fair deal for this piece of Sunbeam Tiger history. Many of these cars have been customized and hot rodded, so finding one that is in stock condition, much less of known single ownership, is rare indeed.

“This vehicle is in great condition and will only increase in historic and monetary value, not only as a car associated with Dick Barker or ‘The Mule’ but its contribution to the history of the Sunbeam Tiger,” the seller notes.

The Drive With Alan Taylor: Into the wild with the new 2022 Subaru Outback Wilderness

Question of the Day: What is the best car you’ve owned?