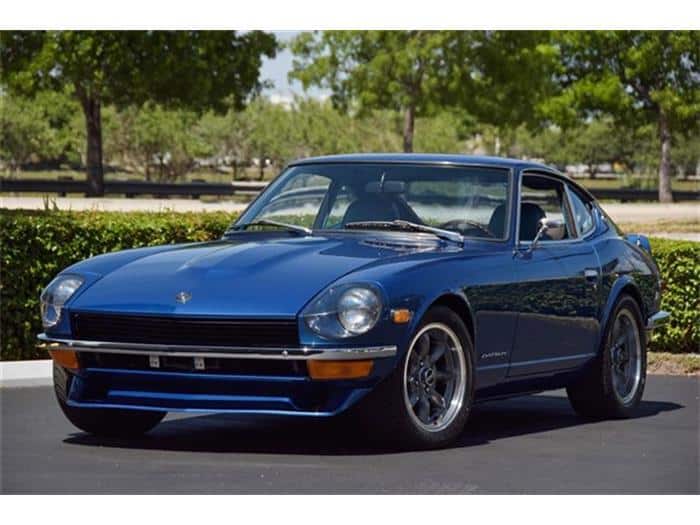 According to an article written in June 1970 by Car and Driver, “The difference between the Datsun 240Z and your everyday three-and-a-half thousand dollar sports car is that about twice as much thinking went into the Datsun. It shows. For the money the 240Z is an almost brilliant car.”

Starting with its already excellent platform, this particular 1971 Datsun 240Z was purchased by avid enthusiast and racer Loren St. Lawrence on July 20, 2004, with his goal to make it the best driving 240Z on the road, which is why we chose it for our Pick of the Day.

St. Lawrence had always been passionate about racing, starting out with open-wheeled Lotuses and then moving on to Sunbeam Tigers for 15 years, according to his driver profile on RacingSportsCars.com and his obituary (he died last year). In 1970 when the 240Z came out, he became very competitive in the car in the SCCA and raced in them against his longtime friend, actor Paul Newman. St. Lawrence’s career also includes racing for and working with Vips, Michelob and Budweiser, alongside Bobby Rahal.

According to the seller, St. Lawrence built this car with his friends, all of whom were professionals in the industry, had a passion for high-performance automobiles, and knew the 240Z inside and out while it was built from a racers’ perspective. St. Lawrence wanted the best-driving 240Z, and money was not an issue when it came to building this car.

St. Lawrence put a lot of thought into the 240Z, the seller notes, and used only the best parts, engine combination and transmission.

By far one of the cleanest 1971 Datsun 240Z’s in existence, the seller says in the  advertisement on ClassicCars.com, this car sports blue paint on laser-straight body panels and a bright-blue interior.  The standard 240Z has quickly become a collector car in recent years, but this one apparently goes well beyond that.

For the build, Al Epperly designed and built a rotisserie and the 240Z was taken to Scott Daniels paint shop, Evolution Auto Body. After the car was painted, St. Lawrence took the shell, fenders, hatch, doors and hood back to his shop for reassembly.

St. Lawrence’s goal was to have a performance car that was like new, and his restoration and re-assembly included powder coating all the components; plating all the fasteners, bolts and washers; dying the new and old upholstery; and installing all new rubber seals.

According to the seller, St. Lawrence worked alone in putting back all the wiring, plumbing, dash, interior, glass, suspension, fenders, doors, hatch, hood, engine, transmission, and rear end on the Z.

The Z’s restoration was completed on May 29, 2006, and enjoyed by St. Lawrence until he passed away in July 2014. While the car was designed with racing in mind, St. Lawrence never took the car on the track but enjoyed driving and showing it at several shows over the Northwest and won several awards, according to his obituary.

The car is now for sale on ClassicCars.com and is being offered at $54,900 for what appears to be a spectacular custom performance 240Z.