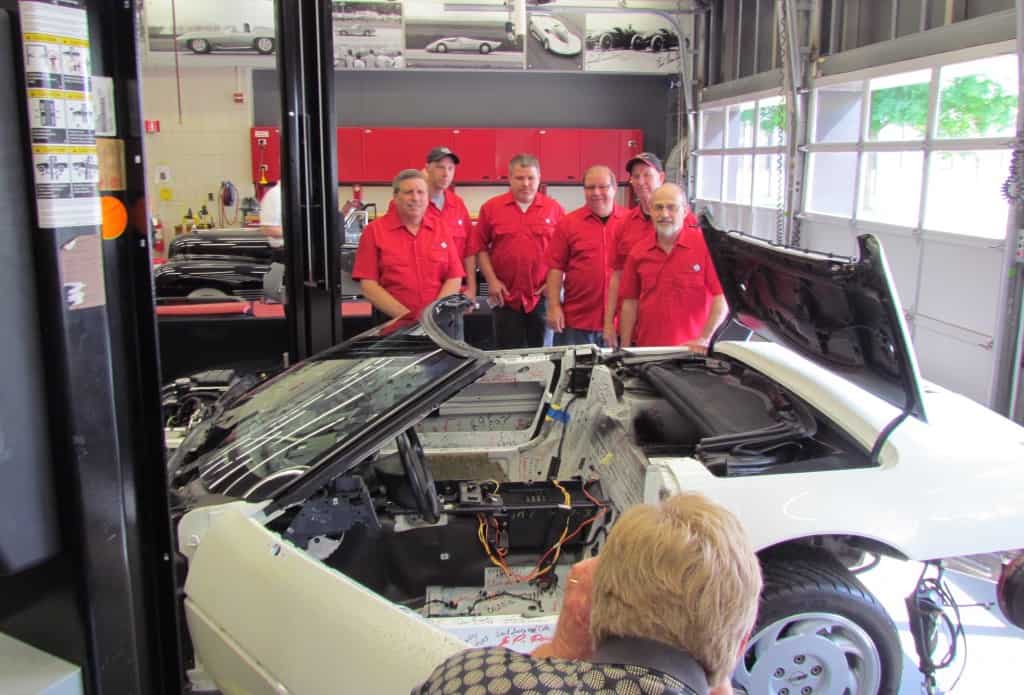 In February 2014, a sinkhole beneath the Skydome at the National Corvette Museum swallowed eight cars, among them the 1 Millionth Corvette built, a white 1992 model. Tuesday, Chevrolet opened the usually off-limits Mechanical Assembly garage within the GM Design building in Warren, Michigan, to a few visitors from the news media to show the restoration work that has been done on that historic car.

“This is a very special place,” Ed Welburn, GM global vice president of design, said as he stood in the five-bay garage built by his predecessors Harley Earl and Bill Mitchell to assemble and maintain their amazing concept cars and other special vehicles. The 1 Millionth Corvette was bookended in the garage by the Buick Y-Job, the first concept car, and by Mitchell’s original Chevrolet Corvette Stingray race car.

Though concepts are built elsewhere, under Welburn’s watch the facility has been used for the restoration or renovation of eight of GM’s most historic concept vehicles.

“This is the right place to do this,” Welburn said of the restoration of the 1 Millionth Corvette. “This is a very important restoration job.”

The most serious work on the 1 Millionth Corvette wasn’t done in this garage, however. Members of the Mechanical Assembly team needed heavier-duty equipment found elsewhere on the GM Tech Center campus for things such as repairing the car’s frame and especially for putting its windshield frame back into an upright position; the frame was flattened over the passenger compartment when the car plummeted into the abyss and was buried in gravel, concrete and debris beneath the Skydome.

So far, the car has been disassembled, the frame restored and structural restoration completed. Now the more-cosmetic work takes place, including upholstery, and then final body and paint work before the car returns to the museum in time for its annual Labor Day-weekend celebration.

Dave Bolognino, who oversees the Mechanical Assembly garage and team, said every effort is being made to make this a true restoration that will keep all original parts that can be saved and restored intact.

Which brings us to the surprise Bolognino’s team found as it took the car apart — signatures. It’s not unusual for special cars to carry autographs, but this 1 Millionths Corvette was signed by seemingly every person who had a hand in its construction as it moved along the assembly line.

Finding all those signatures was part of the process. Preserving them is another challenge.

Mark Orzeo, one of the Mechanical Assembly mechanics, said there were signatures in very unexpected places on the car, even within the trim panels on the car’s A pillars.