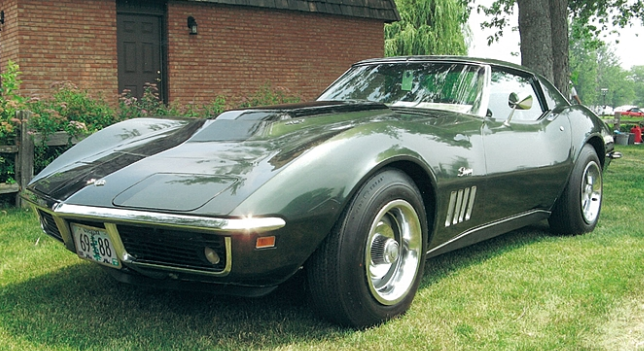 Offered for 1967-1969 only, a total of 216 L88 Corvettes were produced as what was essentially a factory racing option, powered by the 427/430 horsepower V8 and heavy-duty four-speed transmission.

Crossing the Mecum Auction block at the Seattle auction June 5-6, this 1969 Chevrolet Corvette L88 coupe is a very rare, unrestored beast. The car has spent three decades in careful storage, after which it was been awarded four-category Bloomington Gold Survivor honors. The L88 Corvette is considered the holy grail of Corvettes, and this “camouflaged solider” has the ultra-rare bonus of being in original condition.

The L-88 option package for the Corvette included all the ingredients to allow the everyday driver to destroy any potential competition at local track events, while the pros were able to dominate the 12 hours of Sebring, 24 hours of Daytona, FIA GT and the SCCA A Production Competition.

This is the original interior, the car has never been restored

Besides the 427 and the four-speed, the L88 boasts a Positraction rear, heavy-duty suspension, heavy-duty power brakes, a special cooling system and a raised fresh-air induction hood.

The L88 terrorized the streets of Los Angeles until its third owner moved it to Oregon. In 1976, the car was placed in storage.  It was later purchased it in 2006 by a collector-car enthusiast.

In 2007, unrestored, the L88 earned a Chevy Vettefest Bronze Spinner Award and achieved Bloomington Gold Survivor status in all four categories, which include paint, interior, chassis and driveline. After a remarkable win, the car returned in 2008 for Bloomington Gold where it was part of the L88 Invasion.