Famed racing driver Stirling Moss, much in the news lately because of his many appearances at concours and other events, has consigned a vintage competition Porsche from his own collection to the Bonhams Auction at the Goodwood Festival of Speed in the UK.

The 1961 Porsche RS-61, like the agile RennSport race cars that Moss drove in competition during his career, will be offered June 26 at the Goodwood House sale in Chichester, UK.

Moss, 85, has owned the Porsche (chassis 718-070) since 2010, when he purchased it for $1,705,000 at the Gooding auction at Amelia Island. He bought it less than a week after he fell down an elevator shaft at his home, breaking both ankles. He later competed with the Porsche in vintage racing at such venues as the Le Mans Classic in France and the Monterey Motorsports Reunion in California, his final track event before retiring from motorsports.

In 1961, the British driver was dominating the Targa Florio in a similar 2-liter Porsche RS-60 with co-driver Graham Hill, but was forced to drop out near the end of the race with mechanical trouble.

“Our racing car was just perfect for the course, we could hardly have wished for nicer,” Moss recalled in a Bonhams news release. “We looked on course for a lap record last time round and a great win until – only 8 kilometers from the finish – the transmission failed, put us out, and the Ferrari won instead. We have since been described as moral winners of that race, which is unfortunate, because moral first places don’t pay first-place prize money.”

Moss and Hill subsequently drove the latest Porsche RS-61 – essentially identical to the car coming to auction – fitted with a 1,605cc engine, in the subsequent Nurburgring 1,000 Kilometers race in Germany. The track was slick with rain, and Moss took the lead on the second lap. But as the course dried, the far-larger and more-powerful factory Ferraris forged ahead.

“After 12 laps I handed over to Graham who rejoined fifth. Then it began to snow!” Moss said. “Graham handed back to me and I found the little Porsche ideal for the Nurburgring in such conditions. We climbed into third, then second. I was set to take the lead when the little car broke – but it had been exciting while it lasted.” 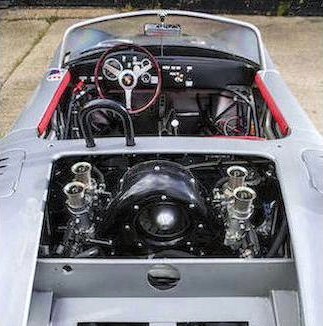 The Porsche RS-61 offered for sale at Bonhams’ 2015 Goodwood Festival of Speed sale was originally sold in 1961 Bob Holbert of Pennsylvania, who was the leading American Porsche specialist of the era. Holbert raced the car in Sports Car Club of America East Coast events. The car continued in SCCA racing with subsequent owners, posting 13 victories and 20 podium finishes in all.

“We are hugely honored to have been commissioned to sell Sir Stirling’s cherished Porsche RS61 following his retirement from competitive motor sport,” said James Knight, head of Bonhams Motor Car Department, in the news release. “It is particularly appropriate that we should offer the car at the forthcoming Goodwood Festival of Speed – where Sir Stirling is the founder patron and where he achieved so much throughout his unmatchable career.”

For more information, see the Bonhams Festival of Speed website.