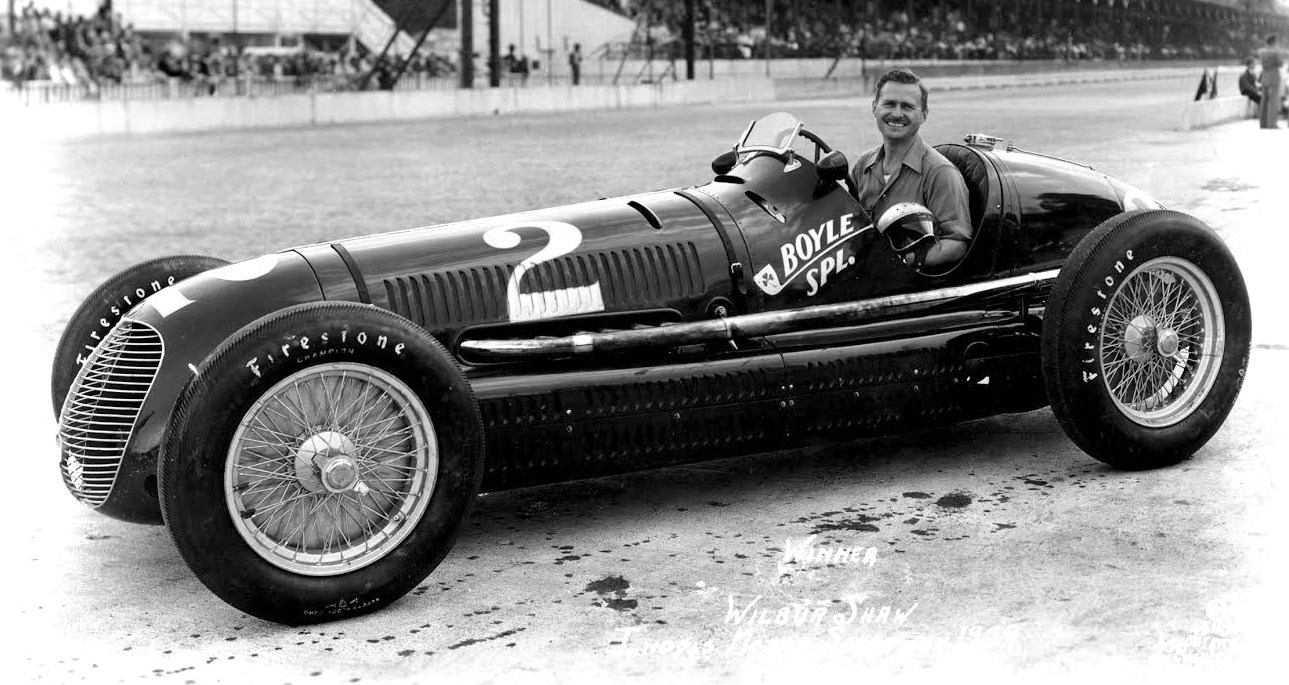 In 1938, Ernesto Maserati developed the Maserati 8CTF to compete with the likes of Mercedes and Auto Union on the European GP circuit. Although not particularly successful on the Continent, the car gained fame stateside with a historic victory at the Indianapolis 500.

Michael Joseph Boyle (1881-1958) had been campaigning cars at Indy for more than a decade. “Umbrella Mike” was the powerful business manager of Local 134 of the International Brotherhood of Electrical Workers in Chicago, and is said to have gotten his nickname due to receiving payoffs dropped into his open umbrella.

When not brokering pardons for Governor Len Small, Boyle was building a well-funded race team. By 1938, that team included the respected mechanic Cotton Henning and renowned driver Wilber Shaw. It is said that Shaw and Boyle attended the 1937 Vanderbilt Cup revival at Roosevelt racetrack and were impressed with the foreign cars.

Henning contacted Maserati, which was very open to establishing a foothold in America. Boyle paid the considerable sum of $15,000 in 1938 and Maserati shipped a new eight-cylinder, 3.0-liter, twin-supercharged 8CTF grand prix car. Apparently during the frigid Atlantic crossing, the water in the cooling system froze and cracked the block, which Henning repaired.

The Maserati was not the most powerful or fastest car entered in 1939 – it qualified third. But it had an advantage over the American built specials in the form of superior handling and braking. Wilber Shaw, who had won his first Indy 500 in 1937 and came in second in 1938, would use this advantage to brake later and accelerate out of the turn ahead of the pack.

The Maserati would deliver both Shaw and Boyle their second Indy 500 victory. The same car delivered victory to Shaw and Boyle again in 1940 (wearing the No. 1 as it does today) and Shaw would lead the race with the car yet again in 1941, until he lost a wheel and crashed, which ended his driving career.

The car lived on and continued to be competitive in the hands of Ted Horn and Lee Wallard right up through 1950. Today the car is one of the stars of the Indianapolis Motor Speedway Museum’s collection, where it took a parade lap before the 2014 Indy 500. Beautifully restored, it was displayed last year at the Pebble Beach Concours d’Elegance.

Also last year – which marked the 100th anniversary of Maserati – the car received the rare honor of inclusion into the Historic Vehicle Association’s National Historic Vehicle Register and Historic American Engineering Record that is permanently archived in the Library of Congress.

Mike Boyle would continue to hold power over the union until his death in Miami Beach, Florida, in 1958. Wilber Shaw would be instrumental in saving the Indianapolis track, bringing in Tony Hulman to purchase it. Shaw served as president of the track until his death in 1954.