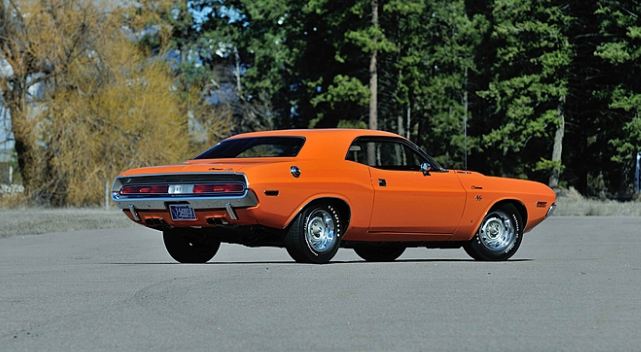 To make room for additional vehicles, muscle-car collector John Wickey is selling some of his cars at the Mecum auction in Seattle on June 5-6.

Wickey, a native of Lenthbridge, Alberta, Canada, has assembled a collection of original vintage muscle cars from GM, Ford and Chrysler produced during the golden age of high performance, as well as some over-the-top resto mods.

Each car in his collection is beautiful, well-preserved and loved, but Wickey doesn’t keep the cars merely for display purposes. He most enjoys taking them out and running them.

“That’s the point right?” Wickey said in the catalog description. “Do the words 427 or 426 Hemi 4-speed put a smile on your face? Well they put one on mine… Just ask the local deputy.”

Among the five cars from his collection coming up for auction are:

A 1969 Chevrolet COPO Camaro, built at a time when General Motors had a corporate policy that prohibited any engine bigger than 400 cubic inches to be put in anything except a full-size vehicle or a Corvette. Vince Piggins used Central Office Processing Order 9561 to get Camaros built on the assembly line powered by the L72-coded 427/425 HP special high-performance big0block engine.

This COPO Camaro had been stored from 1978 to 2002 and shows only 17,000 miles on the odometer. The former race car is painted rally green, has the ZL2 cowl-induction hood, four-speed transmission, and its original BE-code 12-bolt rear end. The engine block was rebuilt in 1971 while the rest of the engine is detailed to restoration standards, according to Mecum. Plus, the engine hits 477 horsepower on the dyno.

A 1968 Ford Shelby GT500KR in Highland Green originally ordered by Courtesy Motors in Littleton, Colorado. Built on June 25, 1968 – the No. 3,794 car created by Shelby in 1968 – it is one of 299 that paired the 428 Cobra Jet engine with factory air conditioning. This car also comes with GT Equipment and visibility groups, power steering, power front disc brakes, tilt-away steering column, AM radio and tinted glass. A restoration was completed on the car by Mustang Club of America judge Tim Mynes using original NOS Ford parts.

A 1970 Dodge Hemi Challenger R/T, a four-speed R-Code Hemi that was originally sold to a Connecticut state trooper. The Challenger was restored by Blue Star Performance during the past decade with extensive use of NOS parts, including an actual 1970’s paper air filter, power front disc brakes, hood pins, racing mirrors and more. This car was featured in Mopar Collectors Guide and was seen at Tent Y at Carlisle in 2008.

Mecum Auctions is expecting approximately 500 vehicles and will be held June 5-6 at the CenturyLink Field Event Center in Seattle Washington. For more information or to view the vehicles, visit the Mecum Auctions website.