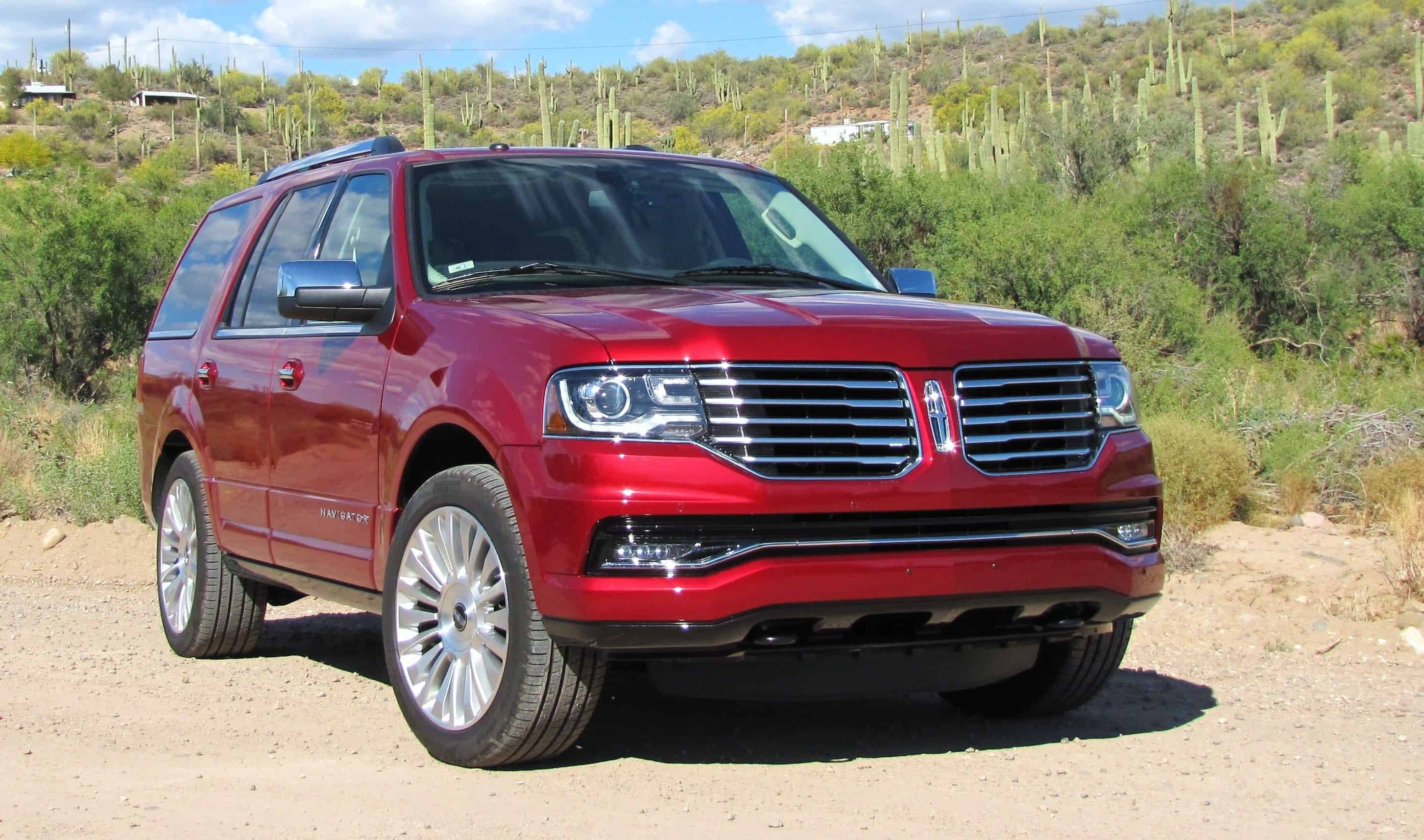 When you really think about it, doesn’t it seem strange that some of the most luxurious and prestigious vehicles these days are basically large trucks? Sure, there are some glorious sedans and crossovers, but for the major statement of having arrived, it takes a luxury truck.

The Lincoln Navigator is a case in point. This big, brawny hunk of excess radiates status whether it’s toting the kids to soccer practice or heading out for a night on the town. Wherever, Navigator coddles its occupants in splendor as they glide high above the common horde.

While some might consider the Navigator to be just a gussied-up Ford Expedition, the Lincoln goes beyond that in making its own flamboyant statement. The overall refinement and attention to detail are impressive, as was the more-than $73,000 price tag on the test truck.

Arch-rival Cadillac is having trouble keeping up with the strong demand for its Escalade, which is the GM division’s most successful product by far and Navigator’s main competitor. Lincoln, which has been struggling in recent years, is looking for a piece of that action with its refreshed Navigator.

Navigator received a welcomed restyling for 2015 that further sets it apart from the crowd. Gone is the retro grille that attempted to channel the ’60s but just looked clunky and contrived. In its place is a nicely rendered and up-to-date split grille made up of horizontal bars with the bold Lincoln emblem at the center. The entire front end looks more rounded and well-integrated.

At the rear is a full-width taillight treatment with a glittering row of LED lights, which is pretty showy but definitely an attention grabber. The test truck was fitted with optional 22-inch polished aluminum wheels that look like something an urban customizer might add. They call them “dubs.”

Cool touch: puddle lights that shine down from the side mirrors that cast silhouettes of the Lincoln emblem on the ground.

Also new for 2015 is Ford’s 3.5-liter EcoBoost V6 that delivers powerful acceleration (the torque rating of 460 pound-feet could explain that) and a deep and satisfying rumble when you lay on the gas. Despite the sophistication of the turbocharged V6 and six-speed automatic, the fuel mileage is not really so hot for this three-ton truck: 15 city, 20 highway and 17 combined. But people don’t buy these things for their economy.

Ford has been pushing EcoBoost technology for everything from little Fiesta’s 1.6-liter four to the 3.5-liter V6 (essentially the same as Navigator’s) found in F-150 pickup trucks, and consumer response has been positive. More F-150s were sold in recent years with the turbo V6 engines than with traditional V8s, Ford says. So no one should miss the previous Navigator’s 5.4-liter V8.

Navigator’s ride is decidedly untrucklike. It is very smooth and softly sprung, maybe a bit too much so for a full-frame truck but probably right on the mark for the target owners who crave the ride and performance of a luxurious car, not a rough-and-tumble truck. Despite its softness, Navigator was respectably responsive and never felt wallowing. Still, I would have preferred more firmness to the suspension.

The four-wheel-drive Navigator that I tested was fully equipped for off-road adventure with such electronic features as dynamic traction control and automatic hill-descent control that would be quite helpful if you were venturing out into the boonies. But on the Navigator, it’s somewhat like gilding the lily since only a fractional percentage of drivers will ever dare take this resplendent conveyance out on any rough trails. Anything more adventuresome than the gravel driveway at the country club would seem like a stretch.

No, this showy beast is a creature of the city and ‘burbs, more attuned to impressing your friends and neighbors than challenging the great outdoors. Although I’m sure it would equate itself well, I wasn’t so interested in risking a scratch or dent in the lovely finish, or damaging those fine wheels, so I stayed on the pavement except for one brief foray on a graded dirt road just to see how it would ride. It was like butter, coasting over the nearly unnoticeable bumps.

The upscale Navigator is naturally heavily laden with features and gadgets. But my first encounter with opening the driver-side door was having the slide-out running board whack me in the shin. The introduction to the other features was more positive, including the much-needed improvement of the electronic video interface that has taken its lumps for difficult complexity.

Despite the vast array of features, the dashboard is pleasantly uncluttered and appointed in wood and leather with contrasting stitches. Everything in here is big and bold, but not ostentatious. The major controls are easily accessible; especially appreciated are the analog controls for audio and climate. There were also such useful safety features as lane-change warning and cross-traffic alert for when you’re backing this big boy out of a parking space.

The test Navigator felt plenty large enough, but there’s also an extra-length version that adds 12 inches to the wheelbase and 15 inches to the overall length. Both models have second- and third-row seats that fold up or down with the touch of a button. Of course, the tailgate is fully electric. And the audio system is absolutely splendid.

I can see how a person could get spoiled by this sort of thing.

Forget the commercials that make us suffer through an actor verbalizing his stream of consciousness as he drives what appears to be a meaningless route; there’s some real news for the Lincoln division of the Ford Motor Company for the 2015 model year.

Gone is the 310-horsepower, 5.4-liter V8 that propelled the Navigator in previous years. Instead, for the 2015 model year, Lincoln’s full-size luxury sport utility vehicle comes with a twin-turbocharged, 3.5-liter Eco Boost V6.

But while the engine may have two fewer cylinders, it bumps horsepower to 380, a 70-hp surge, and torque climbs to 460, 90 more pound-feet than previously available. And yet more power also means better fuel economy, not that “economy” is a word likely to be mentioned in conjunction with a school-bus-sized, three-row vehicle that weighs at more than 6,000 pounds.

Those differences may not seem like a lot, but remember, you’re not only getting better fuel economy but a whole lot more power to move you, your passengers and your stuff, including stuff you might be towing, down the road.

Full-sized SUVs are not vehicles very many people really need, but there are those who do — for such things as large families or towing — and the new Navigator provides them with a luxurious alternative.

The Navigator we’ve been testing has a seven-passenger interior setup — an eight-seat arrangement also is available — and rides on a chassis equipped with 4×4 capability at the touch of a switch. There’s also a Navigator L that rides on a longer wheelbase (131 vs. 119) and is longer overall (222.3 inches vs. 207.4).

You can get a Navigator with seating for seven or eight people. Our’s was the seven-place configuration.

Our’s also has optional Equipment Group 101Ad, a $6,850 package that includes 22-inch wheels, Lincoln Drive Control and a reserve equipment group, as well as $495 worth of Ruby Red Metallic-tinted paint.

And although this is a very large vehicle (I was really glad it didn’t come in School Bus Yellow), the EcoBoost V6 provides more than enough power and the big SUV actually feels and handles like a much smaller vehicle on the road — and in the parking lot, where I found it amazingly easy to park, whether at a store or at the various Arizona Auction Week venues, which included two parking garages in which a long, tall and wide vehicle isn’t always an easy thing to maneuver.

I do have a couple of nits to pick, however, and one issue that I know would quickly become second nature for someone who owns a new Navigator would quickly.

I know I’m going to sound like a spoiled brat, but while the leather on the Navigator’s seats is nice, but have a very low coefficient of friction. The vehicle I actually own has cloth seats and I typically set stuff on the front passengers seat or on the second-row seat behind the driver’s position — things such as my notebook, sunglasses case, hat, sport coat, whatever.

Well, I did that in the Navigator and first time I touched the brakes with any serious force my stuff on the front seat ended up on the floor and a right turn sent stuff sliding across the second row.

However, I can’t say the same thing about the fact that I noticed that the color of the rather large speaker housing that sits atop the driver’s door panel tight against the A pillar didn’t quite match the color of the rest of that door panel’s interior skin. Nor was the fit as smooth as I’d expect in a luxury vehicle that cost nearly $75K.

But my biggest problem with the car was its power-deployed running boards. If you owned this vehicle, you’d quickly get used to the way the running boards automatically emerge from beneath the truck when you open a door. Such steps are very handy when it comes to climbing into or out of such a tall vehicle, and having them hidden away beneath the vehicle would seem to get them out of the airstream and thus may enhance highway fuel economy.

But if you don’t expect them to emerge, you get a nice bruise across your shins.

A Navigator owner would learn quickly. I didn’t. I got banged a couple of times. Guess I’m just a slow learner.