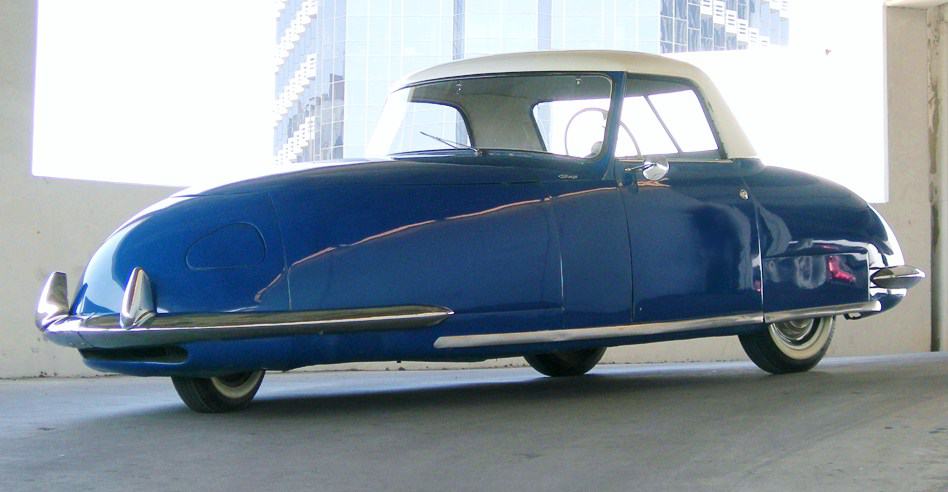 The 1948 Davis Divan is an automotive oddball, an ultra-aerodynamic car with three wheels, four-abreast seating and aircraft styling. It was the product of one man’s passion and was touted as the ultimate car of the future. His plan was to mass produce the cars, but just 17 were built in a former hangar at Van Nuys Airport in Los Angeles.

The Petersen Automotive Museum has one of them, the fourth one built, though it is in rather rough condition. The car needs a full restoration, the Los Angeles museum says, to return the rare piece of history “back to its former glory.”

The Petersen has decided that such an unusual car requires an unusual approach to raise money for the work it needs, so the museum launched a “crowd-funding” campaign Monday aimed at raising $30,000 through private donations.

A page with the headline “Let’s Build This 3-Wheeled Car Together!” has been set up by the museum on the international crowd-funding website Indiegogo, with levels of participation ranging from $5 to $1,000. Access the page at Petersen crowd-funding.

“It’s very important for the Petersen Museum to restore its Davis back to original condition because it really exemplifies the creativity and the ingenuity at work in a very optimistic post-war America,” Petersen chief curator Leslie Kendall said in an accompanying video. “So few cars were built in Los Angeles that every one of them is important.”

Automotive entrepreneur Gary Davis began building the aircraft-inspired Divan with the dream of mass producing what he called a revolutionary automobile, in similar fashion to his would-be -automaker contemporary, Preston Tucker. Davis used as his inspiration a one-off three-wheeler designed and built by Frank Kurtis – whose fame came later as an Indianapolis 500 racecar builder – but with sleeker styling and other innovations.

Davis gathered together a small group of young engineers and set up shop in a 57,000-square-foot hangar formerly used for aircraft assembly. Davis stirred enthusiasm for his car with vastly hyperbolic claims about the Divan’s handling, performance and economy. Investors and prospective dealers flocked aboard. But progress was slow, money was tight and Davis was never able to produce the number of cars he promised.

Lawsuits followed. Davis was eventually convicted of fraud and spent two years in prison. After his release, he tried his hand at a number of other ventures, with his most-notable success being the creation of Dodge ‘Em bumper cars that became an amusement-park staple.

The $30,000 required to restore the Davis at the Petersen museum breaks down to $10,000 for bodywork and paint (to its original color), $5,000 for the interior, $7,500 to rebuild the engine and under-hood components, and $7,500 for all the miscellaneous items that go into a vehicle restoration.

The Indiegogo page shows the levels of donations along with the premiums each level commands, ranging from stickers and T-shirts to invitations to the gala debut party for the restored Davis. Givers at the top level have an opportunity to go for a ride in the unique car.

All funds raised in the crowd-funding effort will go directly into the Davis, Kendall said, adding that the goal is “an accurate representation of what this car was when it was brand new.”

The target for completion of the Davis restoration is December, when the party will be held at the museum. After that, the Davis Divan will enjoy a special place in the museum, Kendall said.

“We have very special plans for this car,” he said. “It’s not going to be just anywhere in the museum. It’s going to be in the innovation section of the museum. As anyone can see, this is probably one of the most innovative cars they’re ever going to look at.”

For more information on the Petersen Museum and its crowd-funding effort, see petersen.org.