Jeep honors heritage with a pair of resto-mods for Moab

In this space on previous occasions I have been critical of the American automakers for, as I’ve seen it, pretty much turning their backs on their heritage, a heritage that may be distained by the companies that made it yet a heritage that is strongly embraced by the classic car community that invests thousands of dollars to buy and restore and maintain and enjoy classic American cars.

So it seems only fair that I now praise one of the American automakers for the way it is embracing its heritage. That automaker is Jeep. 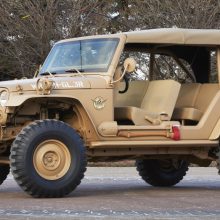 Each spring, Jeep and the Mopar division of FCA (Fiat Chrysler Automobiles) build a series of concept vehicles for the Easter Jeep Safari. The 49th such annual event, which annually attracts thousands of off-road vehicle owners, is scheduled for March 28-April 5 at Moab, Utah.

Usually, Jeep uses the safari to show off its newest technology as well as vehicle design and mechanical component concepts being considered for future vehicles. But this year, Jeep and Mopar are turning the clock back as well as forward with the design of two of the seven new concept vehicles that will debut on the slick-rock trails at Moab.

The Jeep Chief is a tribute to the full-size Jeep Cherokee of the 1970s while the Jeep Staff Car salutes Jeep military service vehicles of the World War II era.

But while they may look like restorations, they’re really what the classic car community would consider resto mods, classic (at least classic-looking) bodywork sitting on a contemporary chassis and with some updated interior accoutrements as well.

Allen said that when it comes to creating the special vehicles for the Easter Jeep Safari, it’s not a matter of focus-group marketing but simply that, “We just pick things we’d like to own. It’s that simple.

“I’ve been with Jeep for many, many years and as a young designer I was really interested in the military side of Jeep,” Allen said, adding that he was strongly discouraged from emphasizing that heritage in Jeep concept vehicles.

It wasn’t until around the time of Jeep’s 70th anniversary that attitudes changed and management agreed it was time to acknowledge the beginning of the brand. Basically, Allen said, the U.S. military couldn’t go any further with horses so the Jeep was developed as a replacement vehicle, and then after the war Jeeps introduced the public to the fun of exploring off-road.

Although it doesn’t look like a new vehicle, the Staff Car is actually a 2014 Jeep Wrangler Rubicon disguised as a 1940s military officer’s vehicle, albeit one riding on a 2-inch lift kit and Dana 44 axles. The Staff Car rides on basic steel wheels, has minimal fender flares, two rows of bench seats and a “hungry horse” stretched canvas roof. There are no doors or B pillar, though there is an old-style artillery box that has been converted into a built-in cooler with an 85-can capacity.

The car has round, military-style headlamps, Jeep J8 bumpers, fender-mounted blackout lamp with guards, a rear-mounted spare tire and a vintage military gas can.

The Sandstorm exterior color carries throughout the vehicle, even the floor, 16-inch wheels (with 35-inch Firestone NDT-military tires), frame and axles are painted.

“I wouldn’t call Jeep’s styling heritage overly rich,” Allen said. “They made do with what they had.” For example, the Wagoneer and Cherokee used the same doors and hood from 1963 through the 1991 model year, Allen added.

“It was fun to recreate that (in the Chief), and it’s amazing how many people still remember it fondly,” Allen said.

The Jeep Chief evokes a West Coast surfer lifestyle, thus the Ocean Blue exterior with a white French Bread roof, albeit with the doors and windshield chopped two inches. The grille is a modified version of the razor grille of the original Wagoneer while the bumpers are chromed classics and the slotted 17-inch mag wheels provide what FCA terms “a true ’70s vibe.”

If the exterior looks classic, the interior is shocking with white leather seats with Hawaiian-theme inserts of large pink, blue and white flowers. There are vintage surf stickers on the center console, a Rosewood grab handle for the passenger and a tiki-style shifter handle for the six-speed manual gearbox.

The Chief bodywork was narrowed to fit over a contemporary Wrangler chassis, equipped with a 2-inch lift, Fox shocks and locking Dana 44s front and rear.

Question of the Day: What do you think is the most attractive taillight from the 1950s?

The ClassicCars.com Journal is heading to Monterey Car Week