Two things we found particularly impressive during our week at the wheel of a 2015 Range Rover HSE: How quiet and comfortable the big British-built sport utility was while cruising along at freeway speeds (think tea time, but at speed and without spilling a drop) and yet how amazingly competent it was while carefully picking its way up and down and around steep, narrow mountain trails miles away from any pavement.

Talk about a single vehicle that’s ready to play all day — in mud, snow or sand, across the open desert or up and down rocky mountain trails — but then can be cleaned up and is ready to be valeted right up front at the opera or symphony or wherever you might be walking the red carpet in your tux or evening gown.

Yes, such versatility comes at a price: Base price of the 2015 Range Rover is a whopping $83,495. The upgrade to HSE adds $6,500, and ours was equipped with all sort of additional optional packages — four-zone climate/comfort control, vision-assist package, driver-assistance package, Rover tow package, Meridian Premium audio, etc., all of which boosted the as-tested price to $101,796.

Yes, that’s a lot of money, but this is a lot of vehicle, and one that isn’t merely luxurious but also is practical, at least for those who lifestyle takes them through such tough and even dangerous environments as the urban freeway, the suburban parking lot, and the muddy or rocky mountain trail, or across the vast expanse of the open desert.

But even if you never venture away from pavement, you’ll appreciate the Range Rover’s trail-bred dexterity as you almost effortlessly steer it into a parking place.

A lot of the driving of this big SUV feels effortless. Electric power steering and air suspension are part of the reason, but so is the fact that the sheet metal is aluminum and that despite its size, the curb weight is less than 5,000 pounds.

Empowering the 2015 Range Rover HSE is the buyer’s choice of two supercharged engines — a 3.0-liter V6 that pumps out 340 horsepower and 332 pound-feet of torque or a 5.0-liter V8 with 510 hp and 461 lb-ft. Both link to the permanent four-wheel drive system through an eight-speed ZF transmission.

Our test car carried the V6, and its output was more than sufficient. It also is rated at 17 mpg in town, a figure achieved in part by the engine shutting off at stop lights (and then immediately running again when you remove your foot from the brake pedal). The system works as intended and the radio keeps playing and the a/c keeps blowing, though in the 90-plus temperatures here in Phoenix we wish it blew as coolly with the engine off as it does when the engine is running and the vehicle is moving.

Regardless, the 2015 Range Rover cruises the freeway at 23 mpg, and it can cruise for quite a distance thanks to the Range Rover’s 27.7-gallon fuel tank. Carrying so much fuel also comes in handy when you’re far from pavement — or gas stations.

We spent such a day in the Range Rover exploring what is basically an old mining trail that crosses a dry lake bed and then climbs through Hewitt Canyon and then up into the Superstition Mountains east of Phoenix.

A knob on the center console allows you to dial in the powertrain, suspension and braking systems for specific terrain — grass/gravel/snow, mud/ruts, sand, rock crawl — or you can just leave it in the Auto mode and let the car figure things out for itself. We tried picking a setting but soon realized it was better just to go with Auto, then focus on steering and let the car do its thing. That includes Hill Descent Control, which brings you slowly down even steep sections of trail, allowing the driver to focus on steering clear of rocks and staying from the edge of single-lane shelf roads with rock walls on one side and drop offs on the other.

Funny to even think about approach and breakover angles in a luxury vehicle, but the Ranger Rover has them, and they’re impressive: 34.7 degree angle of approach, 29.6 degree angle of departure, 28.3 degree breakover. Wading depth is 35.4 inches and ground clearance is 11.63 inches, though the air suspension lowers the vehicle nearly three inches at freeway speeds.

At one point we realized our Arizona trails atlas, now old, frayed and held together by layers of tape, didn’t show the detail we needed, so we stopped a family on ATVs and asked if we were on the route we wanted. We weren’t, and while they were helpful, they also were amazed that we were driving in such terrain in such a luxurious vehicle.

And the 2015 Range Rover is just as luxurious as it is capable. Standard equipment includes triple-zone climate controls, a steering wheel that not only tilts and telescopes but is heated, 10-way power adjustable and heated front seats, reclining back seats (all seating is leather-covered, of course), power-operated split tailgate, interior mood lighting, 12.3-inch information screen with GPS and 380-watt 13-speaker Meridian audio, real wood-veneer interior trim, etc.

The $1,560 Driver Assistance package. which is new for the 2015 model year, adds lane-departure warning with traffic-sign recognition and “perpendicular and Parallel Park with Park Exit and 360 degree park distance control,” all of which is designed to help you park smack-dab in the middle of any parking place to provide the most room possible for entering and exiting your vehicle.

Our test vehicle also had a $900 towing package with hitch receiver and full-size spare tire.

The 2015 Range Rover is part of the fourth-generation of such vehicles by Land Rover, which was founded in 1948 basically to design and build Jeep-style vehicles for the British. The first Range Rover was launched in 1970 as a more luxurious vehicle designed as much for paved roads as for rugged terrain. The fourth-gen version was introduced to the U.S. market for the 2013 model year. 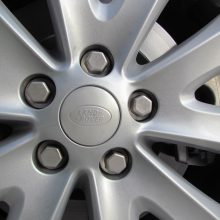