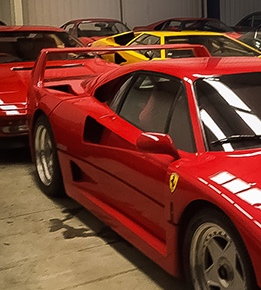 John Collins said he had no idea there even was such a collection when he was contacted about visiting what turned out to be “an Aladdin’s cave” of 27 classic and exotic cars. However, in one of the largest private sales in British classic car collecting history, Collins immediately purchased the cars for slightly more than $30 million.

Within a week of his purchase, Collins already has sold 10 of the cars through his Talacrest classic Ferrari dealership in Ascot, Berkshire.

“When the warehouse doors opened, I thought, ‘Wow.’ It was an Aladdin’s cave of cars,” Collins told the Mirror.

“The owner has built up the collection over the past 20 years and he decided to sell them,” Collins said. “He didn’t want to sell them separately so a contact got in touch with me and I decided I had to have it.

“I didn’t know the collection existed. It has to be one of the biggest-ever purchases of a private collection in the UK.