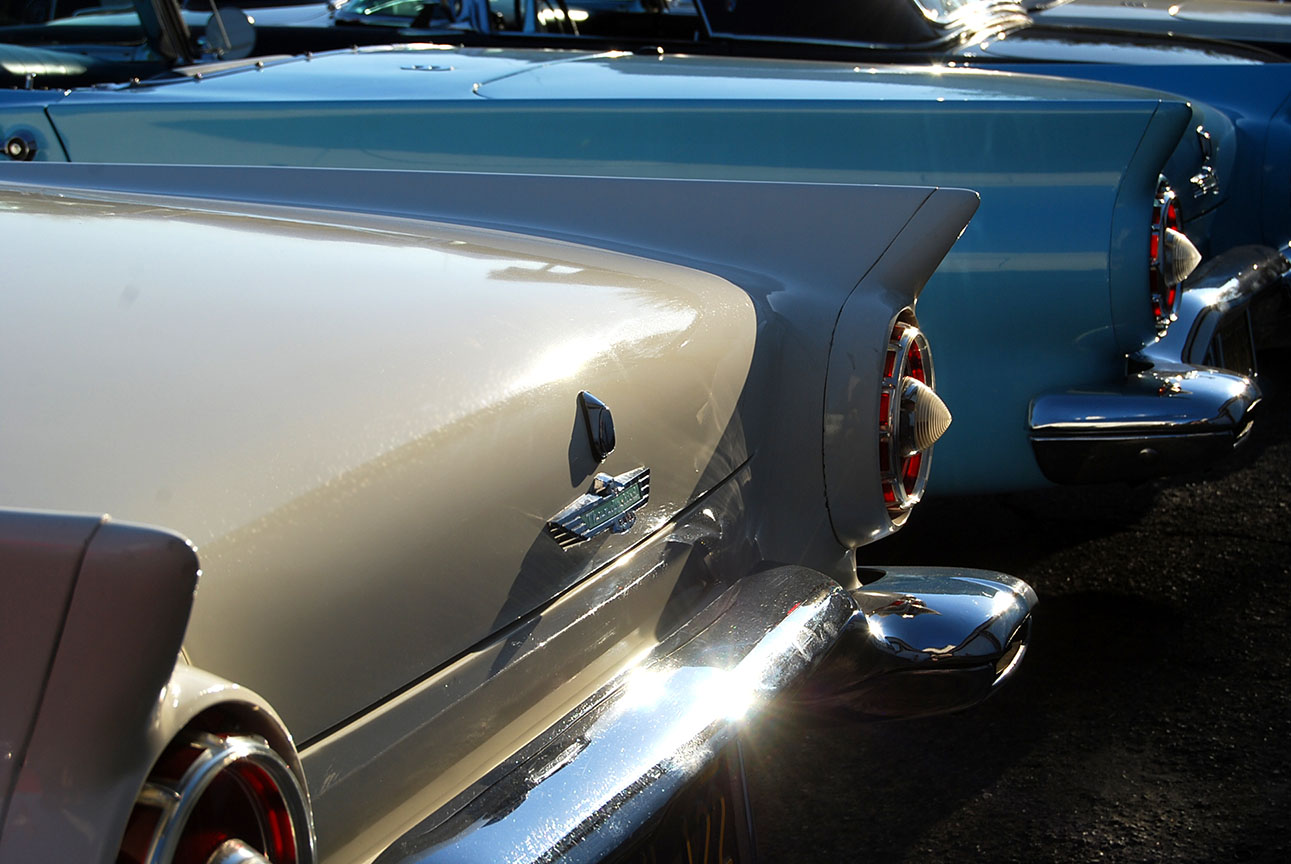 When you think of the 1950s and ’60s, you don’t typically think of the cars as being extreme, but the California Automobile Museum’s latest exhibit may change your mind.

“During this time the culture was changing. During the early ’50s America was all about flight and in the late ’50s we were starting to look at space,” said Carly Starr the curator at the California Automobile Museum.

Thus the period produced the height of extreme fins, extreme color options, and extreme styling. In other words, “Flash & Flair: The atomic ‘50s and ‘60s,” which is title of an exhibition that opens Saturday and runs through June 7 at the museum.

“We really narrowed it down to about five or six years,” Starr said. “We wanted to show the iconic cars as well as uniquely styled cars with all kinds of fins, front end styling, and unique accessories.”

“We got a lot of Chrysler vehicles, but wanted to make sure we have a wide variety of the different cars reflecting the times as well. We have the Ford Edsel, and of course the Packard that takes us outside of the Big 3 during that time and helps give us that balance and variety.”

Starr knew the museum staff wanted to do something “fins”related.

“It’s a broad topic that could go into boats and trailers so we narrowed it down to cars, but that also expanded the exhibit into how fins became popular during this time with the different styling.”

The exhibit will include furniture and appliances from the time period to help show the culture and combination of simplification with advanced technology.

According to Starr, one of the most significant cars in the exhibit is the 1958 Edsel Citation convertible.

“The Edsel just has an interesting story,” she said. “It was a huge production vehicle, but an absolute failure probably due to the extreme styling, and it had the push button transmission on steering wheel.”

She said the museum is very excited to be able to showcase a 1957 Chevrolet Bel Air.

“We always get asked if we have one and we typically don’t,”she said. “The ’57 Chevy Bel Air is just that iconic and legendary car from that time.” The car is on loan to the museum by a private owner.

Meanwhile, she added, “The 1955 Imperial Newport will probably be most the ‘normal looking’ car in the exhibit, and even that has some very unique taillights and styling.”

A complete list of cars featured in the exhibit:

At the end of the exhibit each day, visitors will be able to take parts from various model cars to make their own unique model vehicle and be able to post a photo to Facebook or email it to themselves.

“We will also have an interactive pop quiz with hub caps, hood ornaments, different grills on a wall for people to be able to guess the year or the car it came off of,” Starr said.

For more information on this exhibit, visit the museum’s website.