This is the second of four installments telling the story of the first modern classic car auction. Here’s the link to part 1. 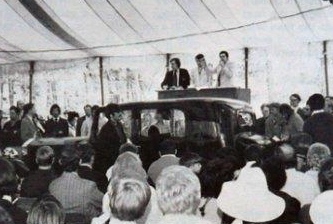 Kirk F. White was impressed by that auction in New York City, but not in good ways.

“The scene, as I drove by slowly, was nearly amusing,” he writes in the manuscript of his unpublished memoir. “It appeared as if the lumbering Rolls-Royce that was being auctioned may well have been drunkenly lurched half on the sidewalk, possibly by an inebriated chauffeur. One could almost conjure an image of the police having been summoned, the besotted chauffeur hauled away to the pokey, and the poor old Rolls being auctioned off on the spot!”

White parked his car and walked back to the scene, where a Rolls limousine had replaced the Silver Wraith at the curb and as other cars to be auctioned were emerging from an underground garage half a block up the street.

“I was able to faintly hear the auctioneer gently imploring the small gathering to offer a bid on this dusty, old behemoth,” White remembers. “I was struck by the lethargic nature of the event.”

On his drive back to Philadelphia, White pondered the potential for doing a classic car auction in a way to make it more attractive, even exciting for buyers and sellers alike. When he got home, he quickly called his friend, M.L. “Tiny” Gould, who was among the first in the country to establish a dealership that specialized on classic vehicles.

Every other week or so, White would make the 120-mile drive north from West Philadelphia to Gould’s dealership in Truckville, near Scranton. They also would see each other at the car auctions at Manheim, Pennsylvania, where new and used car dealers would gather to bid on cars to populate their used car lots.

If the scene on 72nd Street had been lethargic, the action at Manheim was frenetic, with cars in multiple lanes where you better bid quickly because the hammers were falling – Sold! Sold! Sold!

[/pullquote]But how, White wondered, could the excitement of a Manheim-style auction be applied to the more formal world of classic car sales?

“Let’s meet in Ephrata next week for dinner,” Gould told White. “There’s someone I’d like you to meet.”

Gould had started buying and selling what we recognize as classic cars in the late 1950s, his son, Donnie recalls. Today, Donnie Gould is president of Auctions America, the grassroots sales arm of RM Auctions.

“Tiny” Gould’s first job was working as a parts delivery boy for car dealerships. He got into the tire recapping business and raced cars on oval tracks, drag strips, hill climbs and sports car circuits, until suffering a heart attack while racing his Allard. That’s when he started buying and restoring and selling cars as a full-time business.

Where Gould wanted White to meet him was between Manheim and Reading, at a restaurant near the Garden Spot Auto Auction, a much smaller version of the Manhaim wholesale auction that Omar Landis held each week.

“Omar rose to say hello,” White remembers. “He was well over six-feet tall, with a thick head of black hair. He had a reserved but very pleasant demeanor. He was serious by nature, but gifted with a very remarkable sense of humor.”

It was just a voice you turned to listen to.”

[/pullquote]Commanding. Not loud or brash, it was just a voice you turned to listen to,” is how White describes it.

Landis offered some ideas about auctions and invited White to come back for the next event at the Garden Spot. What White saw that day he went to back to Ephrata was, well, in White’s words it was “magical.”

“He had complete control of the room,” White remembers. “He made each bidder feel as if he was the cleverest buyer in the house, and then he’d switch his admiration to the next bidder, and then back to you. He weaved in a remarkable sense of humor with his selling.”

White drove back to Philadelphia convinced that one thing that would rev up classic car auctions was more Garden Spot Auto and less British nonchalance on the part of the auctioneer. And while he didn’t like the atmosphere of selling classics on a New York curb, he also knew that those caring for classic cars would not be comfortable with the fast-paced, wholesale used-car sales format.

And then divine intervention struck.