My Classic Car: The Faris brothers’ 6.3 Mercedes (5 of them) 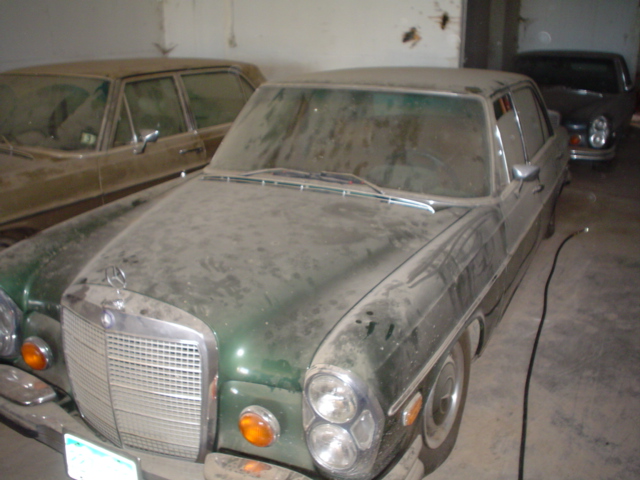 I like Mercedes-Benz sedans. I have a 500 SEL and a 560 SEL, so I’d been looking for a 6.3 when my brother, Scott, called me out of the blue. He found a local ad in Fort Collins, Colorado, for five of these cars. I said he needed to go look at them — Now!

It was an estate sale, a grandson was handling the sale of the cars for his grandmother. He told my brother he didn’t have time to show the cars, but Scott persisted and finally was told he could have 20 minutes, which isn’t much time to look at five cars.

Scott called me back. Two of the cars had been cleaned up, but three were in another garage and were covered with dust.

They wanted cash, all in hundreds. It took the bank a couple of days to get the money.

We had to bring the cars home one at a time on a trailer. The 6.3s have air suspensions. When they sit, they squat down and the wheels won’t turn. We had to come up with a way to get air in them so we could move them. Three of the cars hadn’t been started in 10 or 15 years.

We started washing them up and were astounded at the condition. There were very few scratches, only a couple of dings. But for the most part they were totally straight and had no rust.

They have shined up very nicely. We’re going through the process of getting them sorted out and figuring out what each of them needs.

The cars had belonged to a wealthy cattleman in eastern Colorado. He bought the first one new in 1970. He picked it up and went on vacation with it. His wife said he loved it so much that over time, when one came up for sale, he’d go buy it, would drive it around 500 miles and then put it in the garage.

One time they flew to San Francisco. Somebody met them at the airport with the car they were selling and the couple got in and drove it back to Colorado.

Scott and I have decided to keep the cars.

We had tinkered with buying cars and fixing them up and selling them independently of each other, but we never dreamed we’d have five 6.3s in our garages — and all of them different colors.