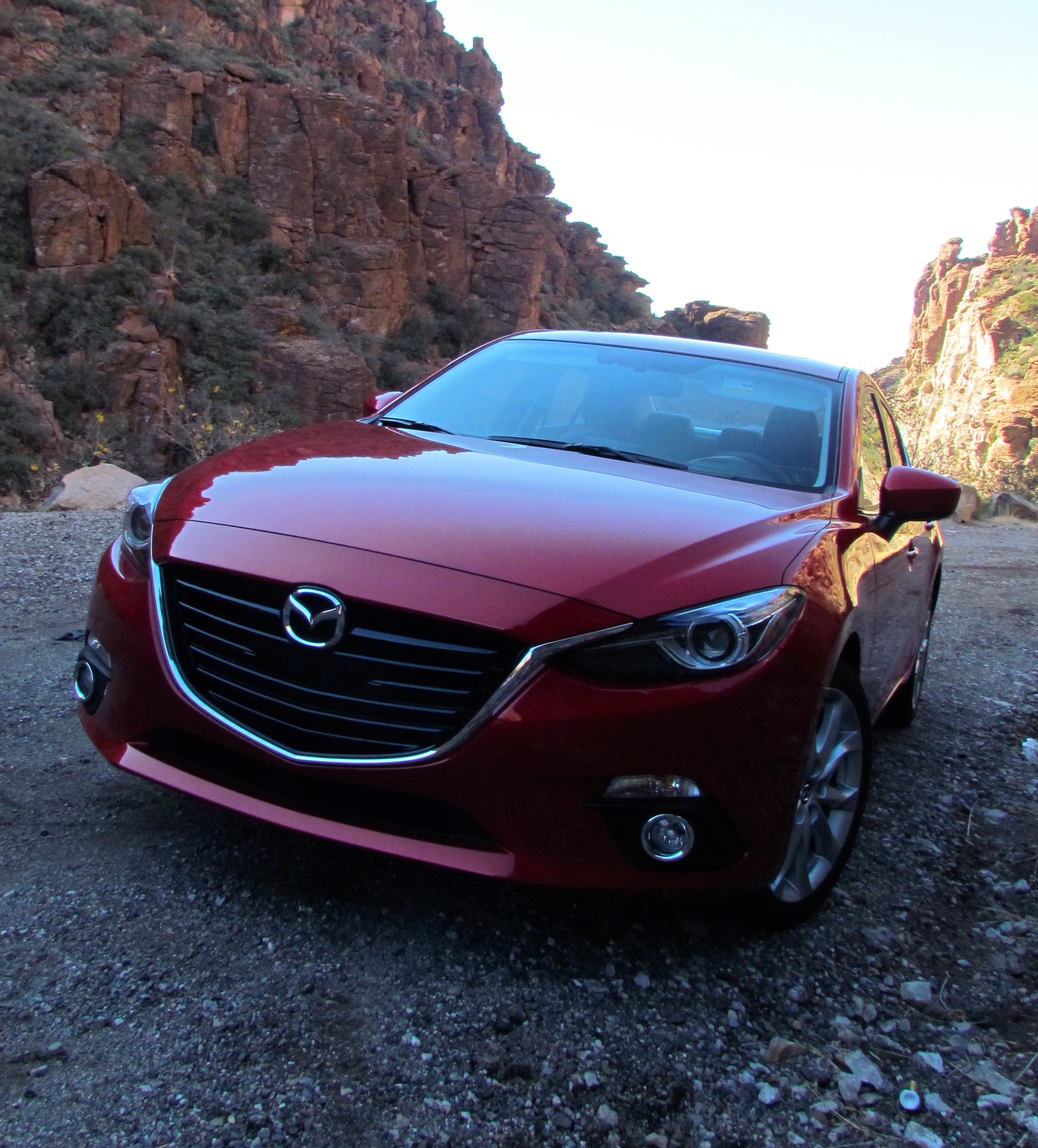 Two things I’ve found to be true about seemingly every Mazda I’ve ever driven:

I’ve just spent a week driving a 2015 Madza3, the top-of-the-line Grand Touring version, and once again, those statements have been proven true.

Mazda really has this zoom-zoom thing down, and especially when the Mazda you’re driving is equipped with a manual transmission that not only allows but seems to encourage the driver to truly experience the full range of the joyous dynamics Mazda engineers into its vehicles.

Many automakers talk about how they spread a DNA of a halo model throughout their vehicle line. Mazda does it. There is, indeed, a lot of Miata in seemingly every Mazda I’ve driven in the past 20 years.

OK, maybe not quite so much in the Tribute, which was actually a rebadged Ford Escape, or the Mazda Protege, but 626/Mazda6, 929, RX7, RX8, MX6, 323 — and especially the 323 GTX with its rally-ready turbocharged all-wheel drivetrain — and even the Millenia and original rear-drive MPV minivan all had some, if not quite a bit of, Miata spunk.

Come to think of it, another exception was the first Miata equipped with an automatic rather than a manual transmission. The car was created specifically for people who faced hours of stop-and-go commuter traffic on a daily basis and were willing to trade driving fun for at least looking good while they chatted with the people in the cars in the next lane.

But our focus isn’t on the exceptions. It’s on the newest Mazda3, which is available with either a 155-horsepower 2.0-liter four-cylinder engine or a 184-hp, 2.5-liter four (standard with the Touring and Grand Touring models), and the buyer’s choice of six-speed manual or six-speed automatic.

Kudos for Mazda for offering the manual in all of its 3-series cars. The Grand Touring we’ve been driving has the larger engine and the manual, and its short-throw shifting lever let’s the driver exercise the engine while enjoying the dexterity of the car’s steering and suspension.

As a bonus, the Mazda3 Grand Touring comes with 18-inch wheels, leather-trimmed and heated sport seats with six-way power on the driver’s side, dual-zone climate controls, push-button starter, blind-spot mirrors, rear camera and cross-traffic alert, fog lamps, dynamic stability control, hill-launch assist, Bose audio, satellite radio, Bluetooth, Bi-Xenon headlamps, moonroof, head-up display screen and navigation technology. All that, well, actually more than that but it would take too long to list them all, for $25,045.

The car we’ve been driving also had a cargo mat, special paint and door sills, bringing the as-tested price, including destination fees, to $26,335.

That pretty much covers my earlier point No. 1, except to add that the car is rated at 25 miles per gallon in city driving and at 37 on the highway, and that it features Skyactiv technology (but for all we can tell Skyactiv is nearly a word someone at Mazda made up to make the work of its engineers appear to be different from that of other automakers’ engineering staffs).

Anyway, now for my earlier point No. 2: First of all, I need to salute Mazda’s engineers and designers and product planners because this Mazda3 is the first Mazda I’ve driven in quite a while with an instrument panel you actually can read while wearing sunglasses.

And not only that, but it now has a digital speedometer, a feature I believe should be mandatory in every new vehicle. (Hey, if it’s good enough for Porsches…)

I moved to Phoenix at the end of 1999 and the area isn’t called the Valley of the Sun without good reason. If the sun’s out — which it is pretty much every day of the year — drivers hereabouts are either wearing sunglasses or are way too eager to spend their time and money at eye doctors’ offices.

Anyway, this new Mazda3 is the first Mazda I remember driving in a very long time with instruments designed so they can be read while wearing sunglasses, even glare-reducing Polarized sunglasses such as the ones I prefer.

However, that statement applies only to the gauges in the cluster immediately ahead of the driver. The Mazda3 also has a 7-inch color touch-screen atop the center cluster of the dashboard with the navigation, radio and apparently other available information. At least that’s what I figured, because for the first few days I was driving while wearing sunglasses, whatever was showing on that screen was invisible to me.

I even read the owner’s manual and had a friend do the same thing to see if there was a way to brighten the display. Finally, a few days into the driving, I was so frustrated that I started pressing here and there on the screen and finally discovered a bar that could be used to brighten the nav-screen display.

I was so happy… at least for a few miles until, with no warning and seemingly no reason, the display reverted back to its cloak of invisibility.

Oh well, at least I could still read my speed and the rpm count, and see the gas gauge and other bits of vital information provided in the cluster behind the steering wheel. And fortunately, the screen remained bright for my ensuing drives.

Nonetheless, that brings me to another point I’d like to make: Why would anyone buy a new car with a factory-installed GPS system that typically adds as much as $2,000 to the car’s price when you can go to Costco or your favorite big-box store and buy a nice GPS unit for maybe a $150 and move it from vehicle to vehicle or even take it with you while hiking or biking or boating?

Hmmm, maybe factory-installed GPS appeals to the same folks who don’t wear sunglasses and would rather ruin their eyes squinting not only to see the instrument panel but the traffic around them as well.