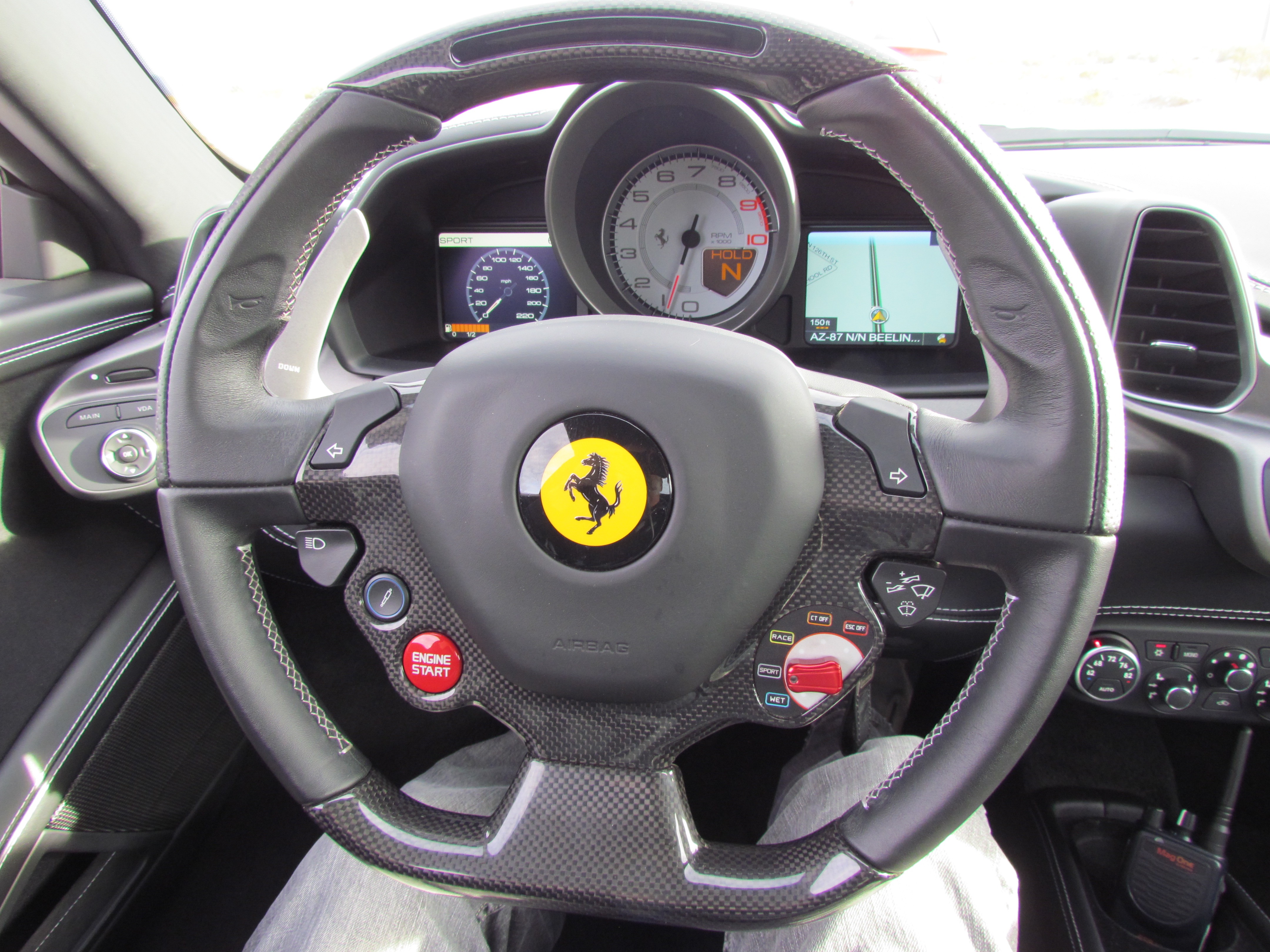 Yes, I know, the math in the headline is not correct. But trust me, the answer is accurate.

Sometimes, it’s fun being a guinea pig, especially when being a test subject involves snuggling yourself in behind the steering wheel and driving three of the world’s latest supercars. In this case, those cars were a Ferrari 458 Spider, a Lamborghini Huracan and a Porsche 911 Turbo.

My test drive started and finished at the Arizona Biltmore, the classic Phoenix resort hotel that in January will host the second annual Arizona Concours d’Elegance just a few days before it becomes the site of RM’s annual Arizona collector-car auction.

The Arizona Biltmore, built in a style inspired by the work of architect Frank Lloyd Wright, is part of the Waldorf Astoria group of hotels and resorts, and it was chosen to be one of the sites for the new Waldorf Astoria Driving Experiences, a program the group is test-marketing this year.

Here’s how the program works: Former race car driver Didier Theys, his wife, Florence, and their DXL company are contracted to show up at selected Waldorf properties with three exotic sports cars.

Theys, a native of Belgium who lives in the Phoenix area, raced professionally for 35 years. He raced at Indy and Le Mans, twice won the 24-hour sports car race at Daytona and was on the podium three times at Le Mans. He manages the Ferrari Challenge racing series for Ferrari, organizes ride-and-drive programs in the U.S., Europe and the Middle East, and if you buy a used Formula One car from Ferrari, it is Theys who delivers it and gives you instructions in how to drive it in vintage races.

Hotel guests can pay $995 to receive a driver’s briefing from Theys that includes specific instructions on the nuances of driving each of the cars, and then they get to drive each of those supercars during an experience that lasts for a couple of hours and runs for around 125 miles.

Before rolling out the program on a group-wide basis in 2015, test runs were conducted this year at selected Waldorf properties. In addition to paying customers, some members of the automotive media were invited to take a turn.

Needless to say, I did not hesitate to RSVP in the positive when the invitation arrived.

To keep things safe and relatively sane, driving is done follow-the-leader style with Theys in the lead in a high-performance sedan. Yes, we’re driving supercars and he’s in a four-door sedan, but he’s a professional race car driver and capable of setting a pace that lets us get a real driving experience. (Plus his car is equipped with a radar detector, so it’s wise to stay in line as directed.)

Our driving route went from the hotel to a freeway, then north and east of the city to rural highways and twisting, hilly two-lanes out near Bartlett Lake east of Scottsdale before working our way back to town, and traffic.

For my first rotation, I was in the 2014 Ferrari 458 Spider, which is equipped with a racing-style steering wheel. Theys showed me the control for setting the car to Sport or even full Race mode, pointed out the shift lights built into the top rim of the steering wheel and suggested that as I accelerate, I engage the paddle shifter when three of those lights are glowing.

Priced at around $260,000, the 458 draws its power from a mid-mounted 4.5-liter V8 that provides 570 horsepower at 9,000 rpm. A seven-speed transmission delivers that power to the car’s rear wheels. As you might imagine, the engine sounds amazing. Handling — steering turn-in, suspension response, braking — is astounding.

Two driving highlights: The lights make you feel like an F1 racer, and I was amazed and delighted at the way the car responded immediately to inputs from my right foot, and not only when accelerating but also with lifting off, even slightly, such as to set and slow the car before a turn.

I was really disappointed when Theys pulled into a parking lot at the lake, indicating it was time to trade cars. I’d really been having fun in the Ferrari and didn’t want to quit driving it. However, my disappointment evaporated quickly since next in line for me was the brand new 2015 Lamborghini Huracan I’d been watching in my rearview mirrors.

Priced around $240,000, the Huracan (aka LP610-4) is the successor to the Lamborghini Gallardo. It carries a 5.2-liter V10 behind the cockpit, good for 602 horsepower. And since Lambo now is owned by Volkswagen and assigned to Audi, the Huracan has four-wheel drive. In the Huracan, that power goes to all wheels via a seven-speed auto-shifted gearbox.

One of my first impressions after climbing inside the Huracan was just how large are its exterior mirrors. But they need to be because there’s very limited visibility via the cockpit’s rearview mirror, and the exterior mirrors need to be big just so you can see around the cars very wide tail section.

You also noticed that hexagon shape of those mirrors, and then you look around and see that hexagon is the design theme throughout the interior. The interior also looks very mechanical, especially after leaving the more bionic shapes inside the Ferrari. If I felt like a racer in the Ferrari, I feel like I was on the bridge of the Star Trek Enterprise in the Lambo.

And that holds up when I hit the accelerator. Instantly, I’m at warp speed, struggling to paddle-shift quickly enough to keep up with the rate of acceleration.

Forget the rear-view mirrors. It’s an effort just to keep the view through the windshield in focus.

My time in the Lamborghini seemed short, though I realize it wasn’t because of mileage but because of the rate those miles flew beneath the wheels.

I’d driven a few Ferraris in the past, and once spent a day in a Gallardo, but I’ve done thousands of miles in 911s. But this was my first drive in the latest-generation 911 Turbo.

Priced at a mere $153,000, the Porsche seemed like a bargain among supercars. Where the Lambo has a V10 and the Ferrari a V8, the Porsche provides a comparatively small horizontally opposed, 3.8-liter six-cylinder powerplant. However, that engine is equipped with a pair of turbochargers, which means it’s good for 560 horsepower, which flows to Porsche’s four-wheel drivetrain through a paddle-shifted, seven-speed dual-clutch automatic gearbox.

The Porsche also comes with a back seat for those with small children or reasonably sized dogs.

Most of my time in the Porsche was on the way back to the Biltmore, which means some freeway and then surface-street traffic. But even on the crowded freeway, when you’re chasing a Ferrari and a Lambo through traffic, you can experience, enjoy and employ the power and the sure-footed dexterity the 911 Turbo provides.

We started this story with a car-based mathematic formula, but forget the math, here’s the real sum/bottom line:

I didn’t want my drive in the Ferrari to end. The Huracan lives up to its name, which is Spanish for hurricane, and, in Lamborghini tradition, also the name of a famous Spanish fighting bull of the 19th Century, as well as the name of the Mayan god of wind, storm and fire. But if I were doing a long road trip, I’d take the Porsche.

Oh, and a PS to anyone who participates in a future Waldorf Astoria Driving Experience: Be careful when you get back into your own car after the supercar drive. In only a couple of hours I’d become so used to supercar performance, and especially to supercar braking performance, I nearly blew a stop sign as I was leaving the Biltmore in my own not-quite-a-supercar pickup truck.