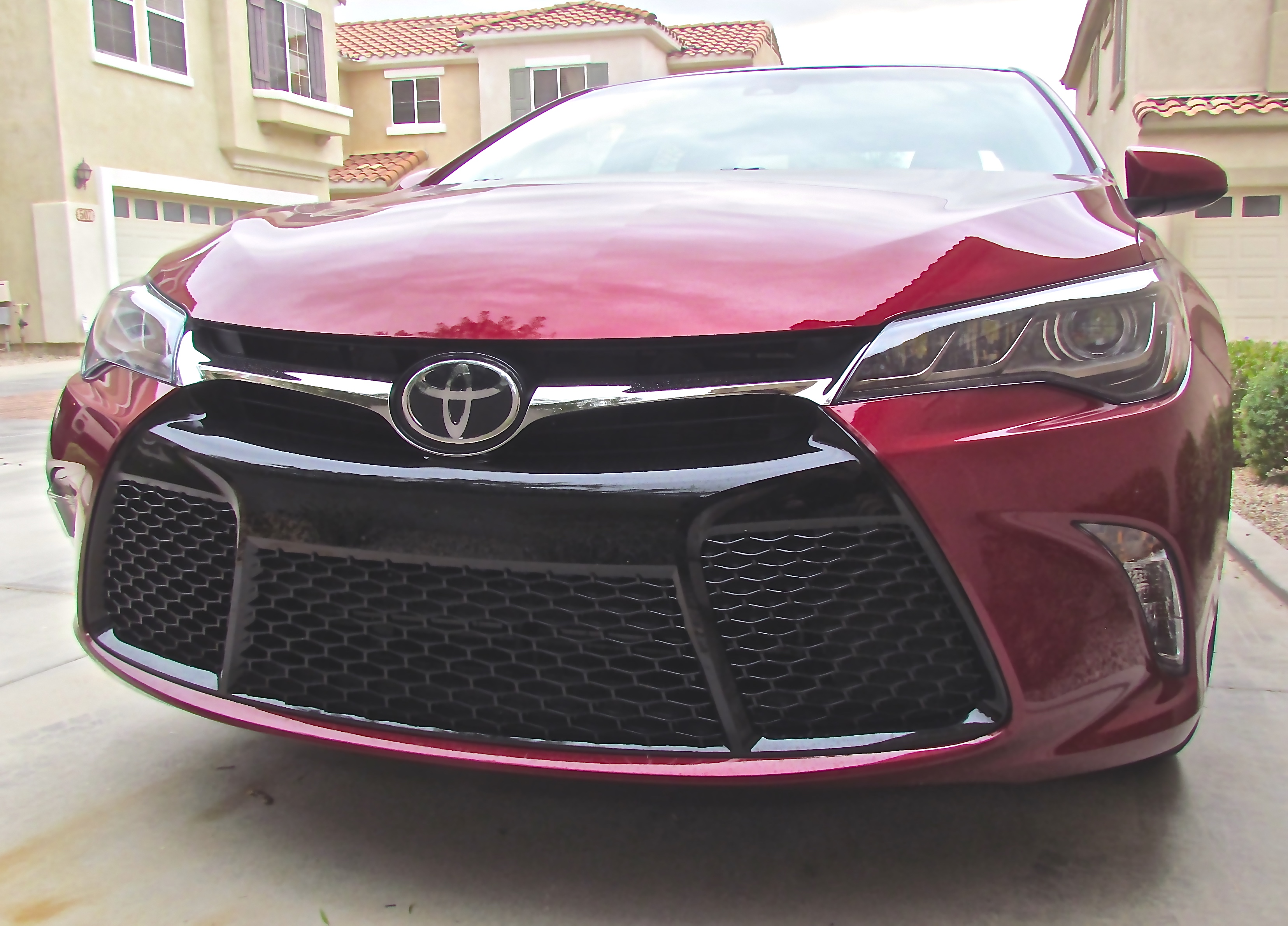 The first time I saw one of those “Bold New Camry” television commercials, I had two thoughts:

Would I ever describe it as bold? Not in my wildest dreams.

But then I went to the SEMA Show, where automakers and others show off their latest car customization and high-performance products, and I saw a new Camry that was, well, indeed bold. No, it was actually way beyond bold. Because what appeared to be just another competent but far from emboldened new Camry turned out to be a wolf-in-sheep’s clothing: Beneath that stock 2015 Camry bodywork was an all-out, 850-supercharged-horsepower, ready-for-the-dragstrip, nitrous-boosted dragster.

Hey, maybe there is something bold about this new Camry after all.

To find out, I’ve just spent a week driving a 2015 Toyota Camry XSE.

I snuggle into the driver’s seat and look around and speculate that likely the only thing bold about this car is the red-stitching that runs across the face of the dashboard. But then I notice that there’s the same stitching on the shift-lever boot (albeit surrounding a lever for an automatic, not for a manual transmission). I also see the same stitching on the seats. Oh, and those seats aren’t the usual slippery leather; they have Ultrasuede to hold you in place in case you take a curve at a bold rate of speed.

For the 2015 model year, Toyota opted to do a major if mid-generation update on this country’s best-selling family sedan (a title the Camry has claimed for like the past dozen years). While the powertrain carries over, the Camry’s track has been widened, the brakes improved, the interior revised and all the bodywork (except the roof) redesigned to be both more aggressive in appearance and more aerodynamic for fuel efficiency.

The car is available in standard gasoline or in hybrid versions. Opt for the standard setup and you can select from LE, SE, XLE and the new XSE trim levels (also new is an SE version of the hybrid, which Toyota calls the “eco fun” setup.)

Opt for the XSE and you also get a 268-horsepower, 3.5-liter V6 engine and six-speed automatic transaxle that you can manipulate via steering wheel-mounted paddle shifters.

Also standard on the XSE are 10 airbags, all sorts of computerized safety technology, rear-view camera, power-adjustable front seats, dual-zone automatic climate controls, and Toyota’s Entune Audio Plus — all for $31,370.

While I found the switchgear to be less than intuitive — and that applies to both the big touch-screen atop the center stack and the controls mounted on the steering wheel — I realize I’m not the average buyer for this vehicle. That buyer, says Toyota, is 45 years old, or some 12-years younger than the typical customer in this segment of the new car marketplace.

Speaking of that marketplace, Toyota sells more than 400,000 Camrys a year, or as it was explained to me, 50 American families drive home every hour from a Toyota dealership in a new Camry.

Since the Camry was introduced to the American market in 1983, Toyota has sold 10.2 million units, and 6.6 million of them still are on the road, Toyota says.

While I’m old enough that my family is grown and we’re scattered around the country, I’m still young at heart when behind the wheel, and I can assure you that this is the best Camry I’ve ever driven, inside and out, and dynamically as well. Imagine: A responsive Camry that can be sort of fun to drive! Yes, it’s pretty luxurious inside, but it’s luxury with a sporty flair, and even better, the car itself is responsive to the enthusiastic driver’s inputs into its pedals and steering wheel.

O.K., it’s not quite bold in a head-turning sense. It’s not going to snap your head back like that SEMA dragster version, nor are a lot of people on the sidewalk going to turn their heads when they see you go past.

However, this new 2015 Toyota Camry XSE certainly fits what my dictionary says is the first definition of bold. It is, indeed, “confidently assertive.”