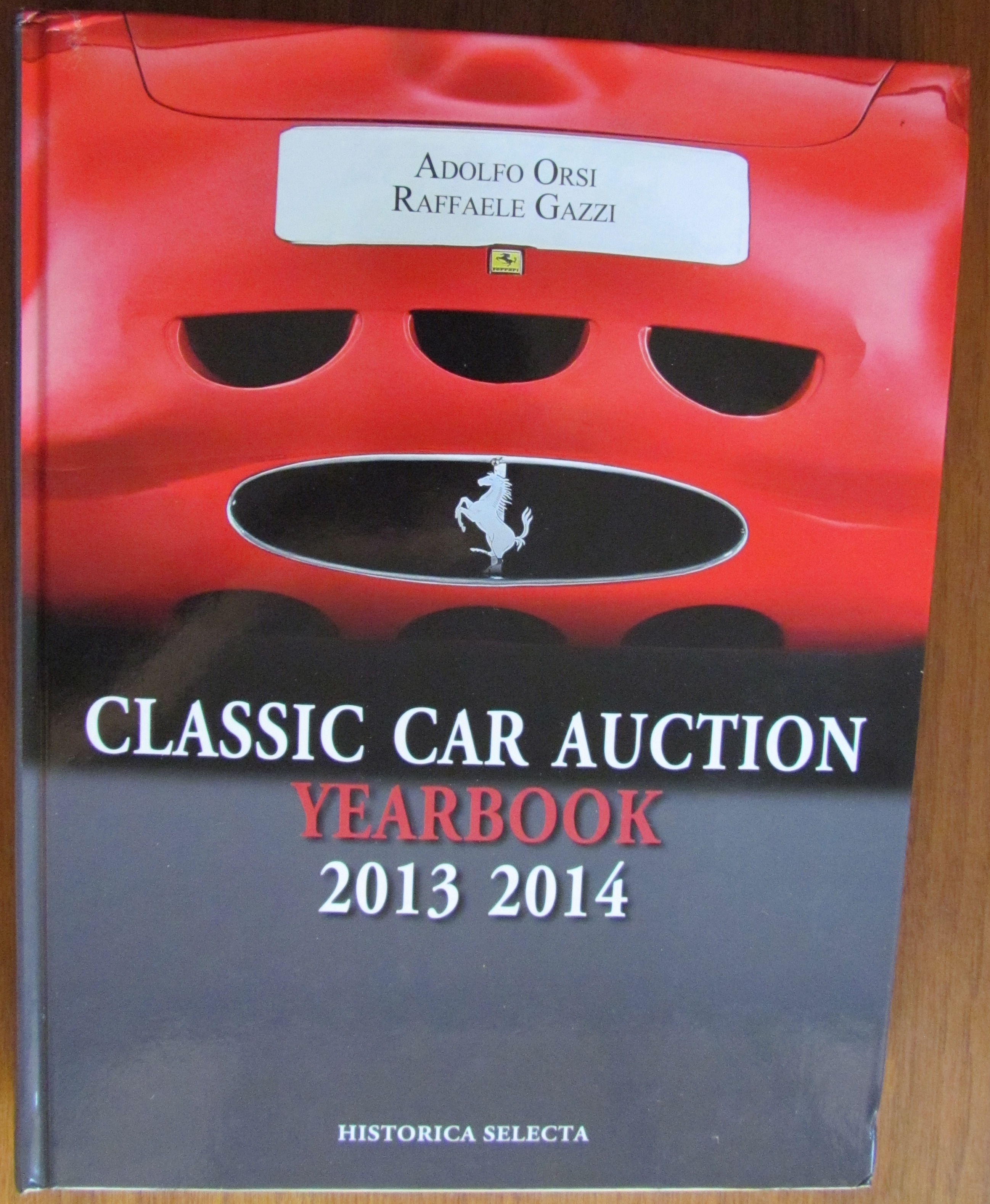 In the past year — and for the first time — the sale of classic cars at major auctions around the world exceeded $1 billion — yes, that’s -llion with a b — and with nearly double the number of cars selling for $1 million or more compared with the previous 12-month period.

And the classic car market was more “Ferrari-centric” than ever, with 48 of the highest 100 prices paid for cars branded with the prancing horse from Maranello.

Those facts and figures are just some of the news being generated by the publication of the 19th edition of the Classic Car Auction Yearbook, this latest volume covering the period from September 2013 through September 2014, which means the facts and figures in the book are so up to date that they include transactions that occurred on the Monterey Peninsula just a few short months ago.

The yearbook, its publication sponsored by Credit Suisse, is the work of Adolfo Orsi Jr., grandson and son of the Orsis of Maserati fame, and Raffaele Gazzi, banker-turned-auto historian and co-owner with Orsi Jr. of Historica Selecta, which has been generating these yearbooks for nearly two decades and now has some 60,000 vehicle auction-sales transactions in its database.

Speaking of that database, the authors note that the classic and collector car market has produced a 2,100-percent gain since they started collecting data on those transactions.

And here’s perhaps the other major news coming out of this newest volume:

“After more than 20 years of market analysis, we’re seeing the bigger picture of generational evolution among collectors,” Orsi Jr. says in the news release announcing the book’s publication, “with more interest among younger ages, and a shift in what is considered blue chip, which leaves us with the continuing need to better understand the data of what is selling and why.”

Certainly, what is selling is Ferraris. But not just Ferraris.

“What can we say about Ferrari 275s that go up by 500,000 Euros a year? Countach Periscopio that have risen by a million Euros in two years, or Ghiblis that have more than doubled in value in six months!” Matthieu Lamoure, managing director of Paris-based Artcurial Motorcars writes in one of the essays that comprise the “market analysis” section of the yearbook.

Interest in the 1970s and 1980s is growing. The clientele is getting younger.”

[/pullquote]“The market is entering a period of change in which the clientele’s tastes are evolving at a furious rate,” Lamoure continues, suggesting that even concours judges are picking up on this evolution as evidenced by the selection of a post-war sports car – a 1954 Ferrari 375 MM Scaglietti coupe – as best of show in August at Pebble Beach, ending decades of domination by pre-war classics.

“Interest in the 1970s and 1980s is growing,” Lamoure writes. “The clientele is getting younger. A few years ago, the average age of people buying cars for over 150,000 euro was around 60 years. Today a number of buyers start to spend their money closer to 40.”

Lamoure notes that it is young entrepreneurs who are fueling this generational shift. How else to explain the prices paid for vehicles such as a 1980 Renault 5 Turbo Group 4 rally car or Porsche 993s?

“Who would have thought that motorcars from the 1990s, even rare ones, were going to experience such a sudden increase in prices…” Lemoure asks. “There is a sense that these cars are becoming as collectible as art objects, as part of an industrial heritage…”

On the other hand, Lemoure wonders, for how much longer pre-war cars will command peak prices: “But who will still be driving Delahaye 135 MS cabriolets, Talbot T150s or Duesenberg coupe chauffeurs in 10 years time?”

“An interesting observation is that we are also beginning to see values rise for the previously unloved supercars of the 1970s, 80s and 90s,” writes Max Girardo, managing director of RM Europe. “As the cars of the 60s rise beyond the reach of many buyers, cars like the Lamborghini Countach, the Ferrari Testarossa and 512 BB and the Maserati Bora — all poster cars of their respective eras — are finding willing new buyers, happy to spend significant sums on the best examples.”

And this from Rupert Banner, vice-president of Bonhams: “In this era of ‘eight figure’ cars, it seems fair to report that collectible automobiles are finally commanding the status that Impressionist and Contemporary art have long been held in, and that those who are equally passionate about their hobby most will say, ’it’s about time’.”

For the record, the yearbook reports that total auction sales in the most recent year totaled $1.163 billion dollars, up from $779 million in just one year, and from $46 million in 1994-95.

And those figures are just for the highest levels of the classic car auction marketplace. U.S. auction houses included are Auctions America, Barrett-Jackson, Gooding & Company, Mecum, RM, and the Russo and Steele sales at Scottsdale and Monterey. Also included are Artcurial, Bonhams, Coy, Silverstone, H&H, Historics at Brooklands and the British Cheffins sale at Cambridge, as well as Automobilia Auktion of Germany, Osenat of France and the Theodore Bruce sale in Australia.

The authors note that 245 cars commanded hammer prices of $1 million or more compared with 136 the previous year.

Of that billion-plus that was spent, $338 million was invested on Ferraris, $102 on Mercedes-Benz, and $102 on Porsches, with Aston Martin next at $58 million.

Three pages of particular fascination in the yearbook are those tracking prices of cars that sold in the 2013-14 time frame after previously selling at another auction within the past 20 years. A few were selling for the third time during that time frame. Consider:

On the other hand, a couple of pre-war classics — a 1911 Mercedes 38/70 PS Tourenwagen and a 1913 Rolls-Royce Silver Ghost tourer — both dropped in value compared with their earlier sales.

So, what should we make of these 292 pages of facts and figures?

“Are we at the crest of a wave with some of these high prices?” the authors ask.

“Of course, we would be more at ease if we encountered, for a certain period, a ‘normal’ market in order to allow for a consolidation of quotes and to digest the strong gains of the past seasons.

“We recall, once again, that ‘collector cars cannot be considered by the same standards as commodities. While share certificates of a public company are all the same, this is not the case for classic cars, because, as we always say, there are no two identical classic cars in the world.’

“Regardless, we can’t be anything other than happy in observing further signs of growth and improvement in quality in our industry… and increasing recognition of the car as a significant element of social and economic history within our society.”