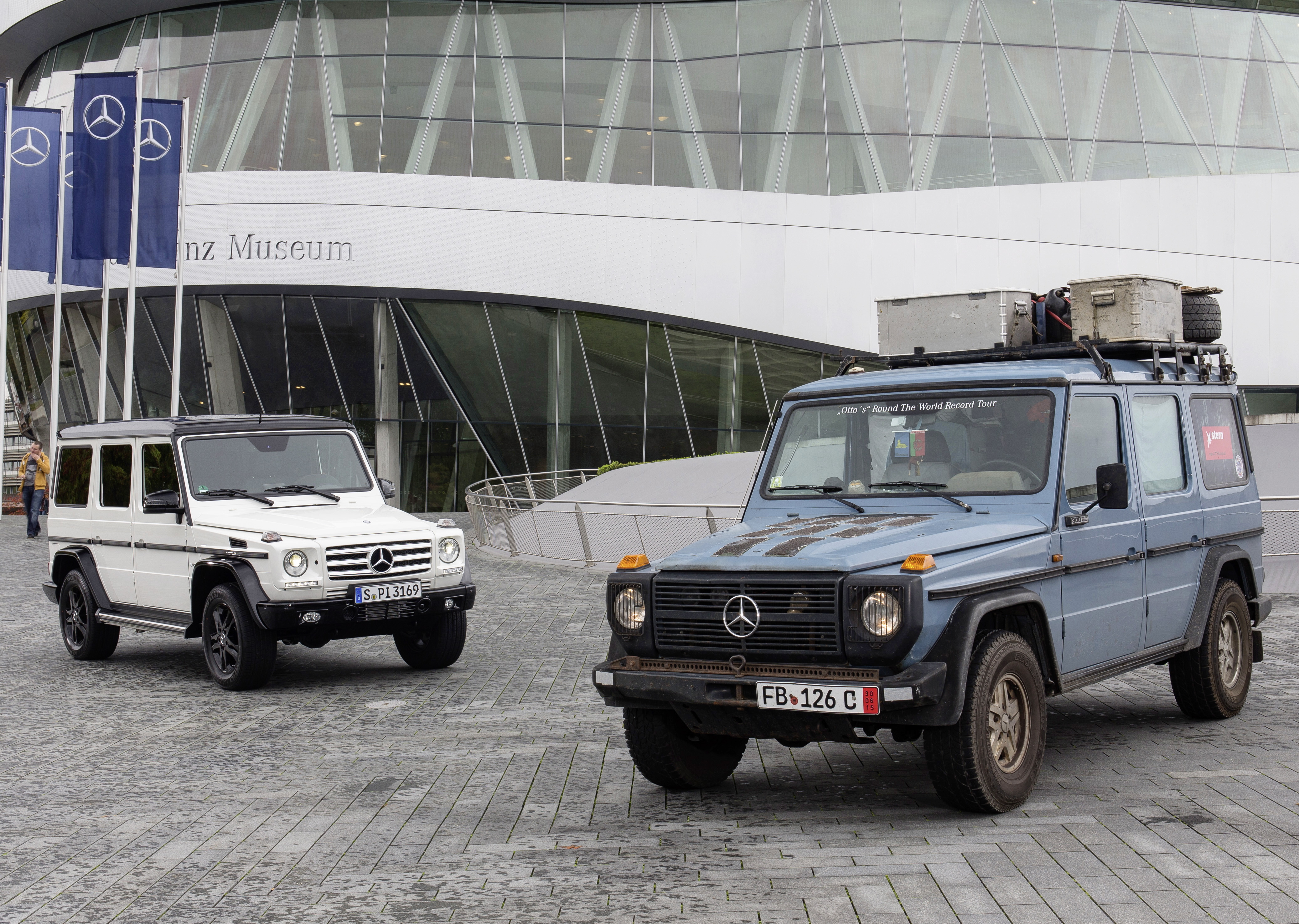 All Gunther Holtorf and his late wife Christine wanted to do was to see how many countries they could visit in “Otto,” their Mercedes-Benz 300 GD. Turns out — a quarter-century and 559,000 miles later — the number was 215.

And now, in conjunction with the 35th anniversary of Mercedes’ go-anywhere — and apparently go-everywhere sport utility vehicle — the Holtorfs’ historic G Wagon will be parked at the Mercedes-Benz Museum in Stuttgart-Unterturkheim, Germany.

Also part of the anniversary celebration is the launch of the new and limited-production Mercedes-Benz G 350 BlueTEC Edition 35 and the G 500 Edition 35 models.

Already, the Guinness World Records organization has recognized the German couples’ vehicle as a world record-holder.

“I’d already seen something of the world,” 77-year-old Gunther Holtorf said as he presented ‘Otto’ to the Mercedes museum, “and I had a rough idea of what the vehicle would have to endure on this kind of world tour. (Thus) in 1988 when I bought the car, I was a bit more skeptical about the promise made by Mercedes-Benz, namely ‘Where there’s a G, there’s a way.”

Holtorf said his skepticism evaporated as he, his wife and their G Wagon traveled, especially, he said, with more than 150,000 miles not only off road, but in extremely challenging terrain and climactic conditions.

Adding to the Otto’s burden was having to carry fuel, food, recovery gear, spare parts (including spare wheels and tires), all of which usually had the G Wagon burdened with 1,100 more pounds than its permissible gross vehicle weight load. Most of that extra weight was carried on the vehicle’s roof.

“Actually, said Holtorf, “the G was always overladen, which is why I fitted it with reinforced springs and bad-road shock absorbers. Otherwise, ‘Otto’ remains like any series-production vehicle. The entire drivetrain with the engine, transmission and axles is still original. Neither the frame nor the body have shown any signs of fatigue.”

Otto’s travels included 41 passages via ocean-going container and 113 deep-sea ferry trips; ranged from more than 17,000-feet in elevation at the Mount Everest base camp to a few hundred feet below sea level at the Dead Sea and in Death Valley; and experienced temperatures ranging from more than 122 degrees in the Australian Outback to 16-below near Irkutsk, Siberia.

Holtorf is a former pilot and aerospace-company manager who wasn’t content with just crossing a border for a quick photo op to add another country to the list.

“A quick stop, with a stamp in your passport to prove it and a symbolic photo with the vehicle at the border crossing — that was never enough for us,” he said. “In our eyes, you can only travel through a country once you’ve delved into the particular hemisphere, come into close contact with the locals and got to know their very many facets.”

Such commitment — and a Round-The-World Record Tour 1990-2014 map he kept throughout the trip helped gain the Holtorfs gain entry to places including North Korea, Myanmar and to drive 15,000 miles across China. In several cases, he said, his was the first foreign vehicle with a foreign driver allowed to drive through a country.

Turns out, however, that Otto’s travels aren’t quite over. In February, 2015, he’ll go on the road again, spending two years visiting Mercedes-Benz sales and service outlets in Europe before returning to the museum.

With the launch of the newest versions of its venerable G-Wagon model, Mercedes wonders if there will be someone to succeed the Holtorfs.

“I promise that there will still be a G-Class in the future,” said company chairman Dieter Zetsche. But, he added, “Will there be more characters of Mr. Holtorf’s ilk in the future?