From 1959 through 1972, the Sports Car Club of America staged races around the lake, races that drew more than 60,000 spectators to watch the likes of Carroll Shelby and Dan Gurney and other leading racers competing in Ferraris, Maseratis, Healeys and…

Guess what, we’re not talking about Elkhart Lake in Wisconsin but Lake Garnett in Kansas, where the Lake Garnett Grand Prix Revival will be staged Saturday. 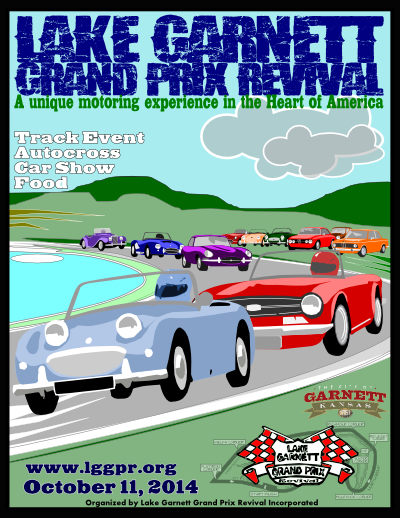 “We have a track event, and autocross event, a car show and great food,” said CB Harris, who is leading the revival effort. “This is an event unlike any other,” he said in a news release promising “A unique motoring experience in the Heart of America.”

“Regular car guys will be able to drive their pride and joys at speed around a historic track,” Harris said.

However, he added: “Safety is the order of the day: this event is not a race. We want this event to become a major national event for car guys, participating being something that will need to be on every bucket list.”

Harris and his organizing committee staged a tribute to the racers last year, with some 70 cars getting an hour of track time. It went so well they’re staging the full revival this year, with sanction from the City of Garnett, which has a population of some 3,500 residents and is located some 75 miles southwest of Kansas City.

More than 150 cars have registered for Saturday. Many are from the local area, but an Austin Healey “frogeye” is coming from California. The car raced at Lake Garnett back in the day and the current owner, grandson of the original racer, is bringing his grandmother with him to the revival.

The 2.8-mile Lake Garnett road course was created as part of the city’s North Lake Park, which was laid out and constructed in 1934 by the Civilian Conservation Corps, which built the 48-acre lake, surrounding roadway (aka race track) and other facilities.

The track/public lake-circling road was repaved and widened in 2007 and features a long Santa Fe Straight, a Clubhouse Bend and Pit Straight as well as corners named Muleshoe, Red Jacket, Flatiron and even Corkscrew.

The revival will feature an all-day car show, an autocross at the local airport, a parade of cars through the city’s Town Square, parade laps around the track and an at-speed track event with passing in designated sections of the track. The most treacherous of spots — Richmond Corner — takes the cars over the dam built to form the lake. A chicane will be created to keep cars away from stone pylons that are part of the dam and no passing will be allowed in that area.

The organizing committee anticipates the revival becoming an annual event and already is planning for a two-day event in 2015.